A video of the president of Benin Patrice Talon next to government official Aurelien Agbenonci, an official, from their meeting with the French president Emmanuel Macron, has gone viral shortly after the clip showed Agbenonci dusting himself up after being touched by Macron.

In the short video, Macron was seen during a welcoming ceremony by president Patrice Talon and Agbenonci and while they were doing a little chit-chat, the French president touched the Beninese official’s arm.

In return, Agbenonci was seen quickly removing Emmanuel Macron’s hand and wiping his shoulder up as if he was cleaning himself up following the French president’s palpation. 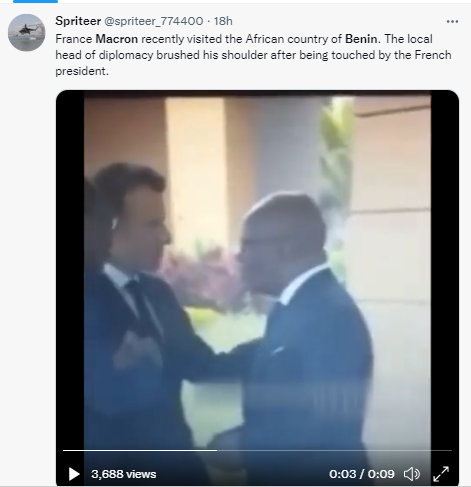 Dozens of comments emerged online following the video as some people slammed the Beninese diplomat’s move while others were surprised by Agbenonci’s move as one commented: “Lol. What did macron did to Benin though?”.

The French politician François Asselineau also shared the video on his official Twitter account saying: “THE PRESIDENT OF BENIN INFLICTS AN UNPRECEDENTED HUMILIATION ON MACRON!”.

The French president visited Africa last week where he kicked off his visit in Cameron and then went to Berin. Macron and Benin president Talon also paid a visit to an exhibition devoted to the royal treasures of Abomey, returned by France last November.