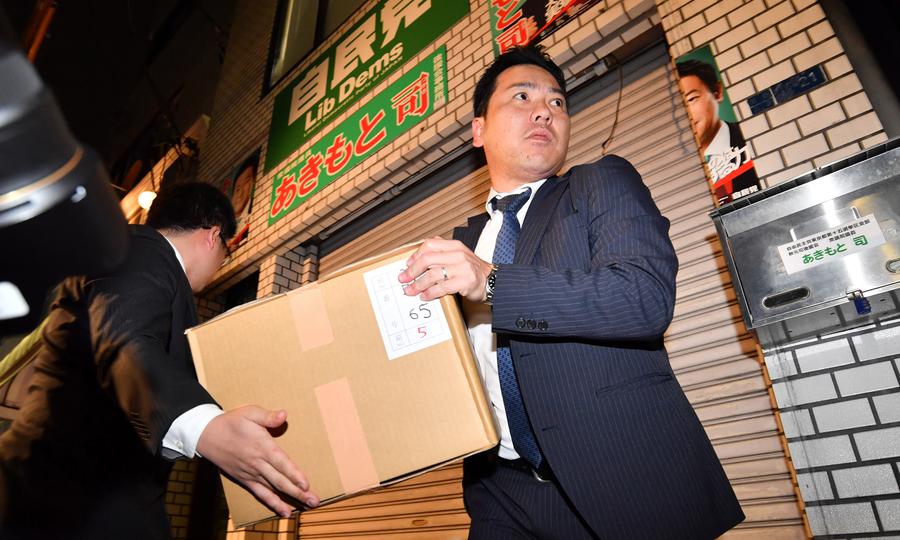 Officers of the Tokyo District Prosecutor’s Office are shown conduct a raid Dec. 20 at a constituency office of Tsukasa Akimoto, a lawmaker, to investigate his alleged connections with a Chinese company related to a casino project. Photo: AFP / The Yomiuri Shimbun

A Japanese lawmaker was arrested on suspicion of accepting bribes worth tens of thousands of dollars from a company that wanted to build a casino, Tokyo prosecutors said Wednesday.

Tsukasa Akimoto, a former member of Prime Minister Shinzo Abe’s ruling party, received three million yen in cash in 2017 ($27,400 at the current rate), prosecutors said in a statement without identifying the company.

The arrest could put pressure on the Abe administration, which legalized casinos in 2018 despite bitter opposition.

Prosecutors alleged he received the money “knowing the company provided it for the purpose of asking for favorable arrangements” for casino projects.

Akimoto resigned from Abe’s Liberal Democratic Party after his arrest.

Prosecutors also alleged he was “invited on a trip to Hokkaido … and received the financial benefits worth around 700,000 yen including airfare and accommodation.”

The policy’s supporters argue that casinos will boost the stagnant economy by bringing in tourists and business, similar to regional gambling hubs like Macau.

Japan is often viewed as the holy grail of gambling in Asia because of its wealthy population, proximity to the huge Chinese market, and an appetite for other forms of legal gambling such as horse racing and pachinko, a slot machine-style game.

But many activists are concerned about Japan’s well-documented gambling addiction issues.