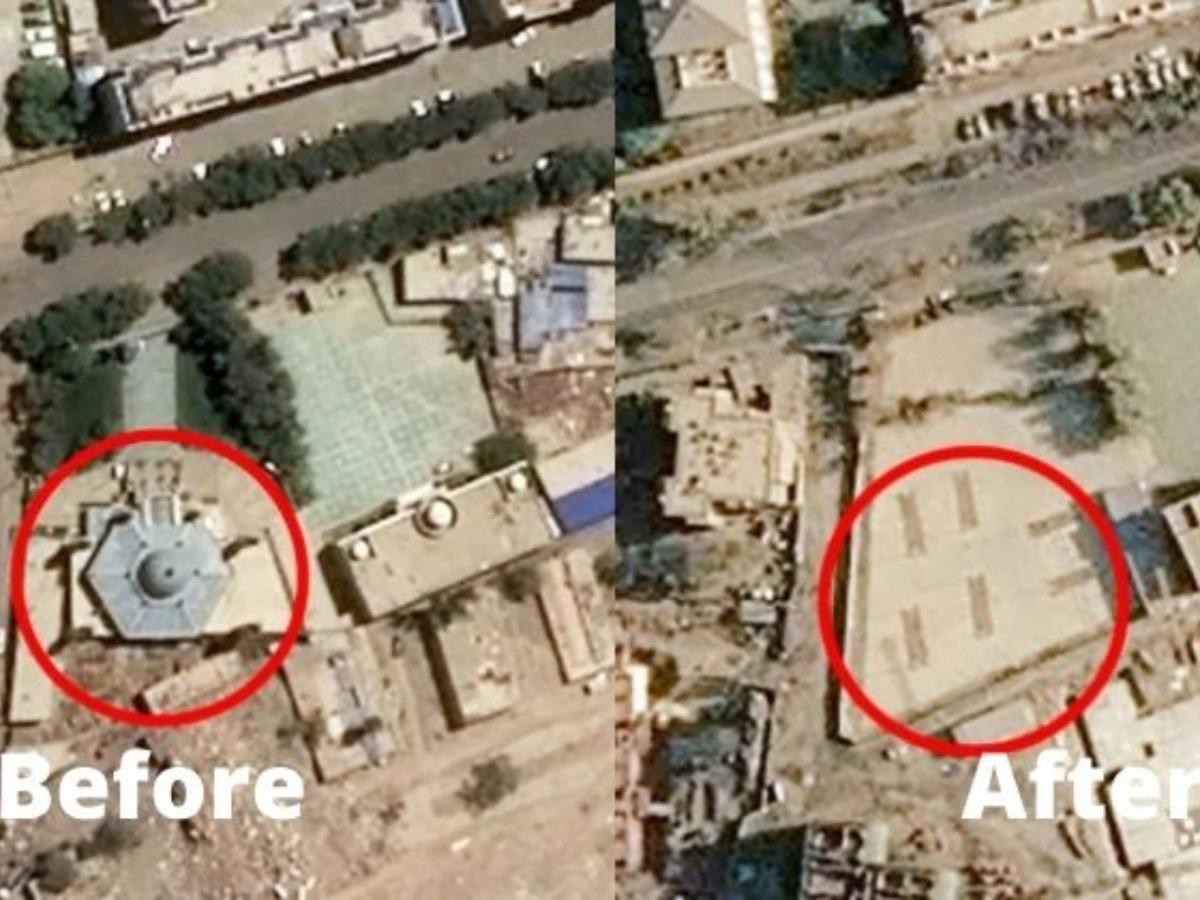 A public toilet has been erected on the site of a demolished mosque in Atush (in Chinese, Atushi) city, in northwest China’s Xinjiang Uyghur Autonomous Region (XUAR), according to a local official, as part of what some observers believe is a campaign aimed at breaking the spirit of Uyghur Muslims.

Reports of the construction of the restroom on the former site of the Tokul mosque in Atush’s Suntagh village come days after RFA’s Uyghur Service learned that authorities had razed two of three mosques there in carrying out a directive to destroy Muslim places of worship en masse that was launched in late 2016, known as “Mosque Rectification.”

The Mosque Rectification drive, part of a series of hardline policies under top leader Xi Jinping, predates the mass incarceration of as many as 1.8 million Uyghurs and other Muslim minorities in a vast network of internment camps in the XUAR that began in April 2017.

RFA recently conducted a telephone interview with a Uyghur neighborhood committee chief from Suntagh village in Atush, a county-level city of about 270,000 people that is the capital of Kizilsu Kirghiz (Kezileisu Keerkezi) Autonomous Prefecture in the cotton- and grape-growing region of southwestern XUAR.

The committee chief, who spoke on condition of anonymity citing fear of reprisal, told RFA that Tokul mosque was torn down in 2018 and that a lavatory had been built in its place by “Han [Chinese] comrades.”

“It’s a public toilet … they haven’t opened it yet, but it’s built,” he said.

“People have toilets at home, so there weren’t any problems like that,” he added, when asked if there had been a need for the public toilet in the local community.

The committee chief said that with Suntagh located about three kilometers (1.85 miles) outside of central Atush, the area sees few to no tourists who would require access to a washroom.

He conceded that the toilet was likely built to cover up the ruins of the destroyed Tokul mosque, as well as for the needs of inspecting groups or cadres visiting the area.

The chief said it was unclear how many people the restroom was built to accommodate.

“It’s still closed, so I haven’t even been inside,” he said.

Another resident of Suntagh, who also declined to be named, said that one of the two mosques in the village RFA recently learned were torn down in or around the autumn of 2019—Azna mosque—had been replaced with “a convenience store” that sells alcohol and cigarettes, the use of which is frowned upon in Islam.

Earlier, a public security officer in Suntagh confirmed that Azna mosque and Bastaggam mosque had been destroyed, while the mosque authorities left standing—Teres mosque—was the smallest and in the poorest condition of all three.

Tang dynasty China first encountered Islam in the seventh century, more than 1,000 years before the Qing dynasty settled what is now Xinjiang. China is now home to more than 22 million Muslims, including some 11 million Uyghurs. Mosques and other religious sites in Xinjiang were badly damaged during the political upheaval of China’s 1966-76 Cultural Revolution.

Through early investigations into the Mosque Rectification campaign, RFA found that authorities had destroyed some 70 percent of the mosques across the XUAR. At the time, authorities gave “social safety” as the reason for the campaign, which appears to have continued into the years following 2016 and the intensification of the authorities’ comprehensive repression of Uyghurs.

In one report from 2016, a local official in Hotan (Hetian) prefecture’s Lop (Luopu) county reported that authorities were planning to use the site of a former mosque to open an “activities center” that would serve as a spot for entertainment. Another official in Hotan city’s Ilchi township told RFA at the time that a former mosque site there was slated for conversion into a factory to produce underwear for a Sichuan-based company.

In addition to mosques, the Chinese authorities have been systematically destroying Muslim cemeteries and other religious structures and sites across the XUAR since 2016.

An investigation by Agence France-Presse revealed that at least 45 cemeteries in the XUAR had been destroyed from 2014 until last October, with 30 razed since 2017. The sites were turned into parks or parking lots, or remained empty lots.

Last year, the Washington-based Uyghur Human Rights Project (UHRP) published a report detailing this campaign, titled “Demolishing Faith: The Destruction and Desecration of Uyghurs Mosques and Shrines,” which uses geolocation and other techniques to show that anywhere between 10,000 and 15,000 mosques, shrines, and other religious sites in the region were destroyed between 2016 and 2019.

Qahar Barat, a Uyghur historian, recently told RFA that the authorities’ desecration of sacred spaces in the XUAR constitutes a kind of “spirit breaking.”

He urged governments and organizations in the Muslim world to take action against China for the desecration, which he called a “declaration of war on Islam.”