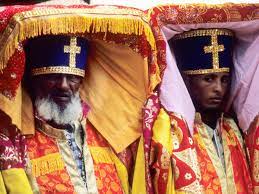 The British seized the plaques after defeating Emperor Tewodros II at the Battle of Maqdala in 1868, and they are now locked away in a vault in a British museum. Ethiopia has asked for the tabots to be returned, but the most the museum is willing to do is let Ethiopia borrow them for an extended time.

The museum trustees said that law prohibits them from returning the items, but supporters argue there is a loophole that would allow them to do so.

“We believe that today the British Museum has a unique opportunity to build a lasting and meaningful bridge of friendship between Britain and Ethiopia by handing the tabots back to the Ethiopian Orthodox Church,” a group of supporters wrote in a letter to the museum trustees.

The 11 tabots, or altar tablets, are of huge spiritual significance. The Ethiopian Orthodox Church believes the tabots are the dwelling place of God on Earth or the Ark of Covenant. Priests use the tabots to sanctify and consecrate church buildings. By tradition, they are supposed to be kept in a private place, away from public view. Only priests are allowed to see them.

Eight of the tabots at the British Museum were acquired during the Battle of Maqdala. British soldiers reportedly took the tabots, jewelry and other precious items after Tewodros committed suicide instead of surrendering to British soldiers. More than 500 soldiers were killed in the battle. Some of the other items were returned to Ethiopia last month, but they are still negotiating the return of the tabots.

Supporters argue that since the tabots cannot and have not been exhibited, they should be returned to Ethiopia. Images of the tabots are not even made available on the museum’s website.

The museum argued that the British Museum Act of 1963 blocks them from permanently returning the items. Supporters, however, said the law allows the disposal of objects “unfit to be retained as long as they can be disposed “without detriment to the interests of students,” and the tabots have “no apparent use or relevance to the museum.”

However, the museum is still reluctant to release the items.

“These documents need to be reviewed and addressed with full consideration, and more time is required before this can be looked at by trustees,” The British Museum said in a recent statement to the Guardian.

Ethiopia announced the retrieval of a ceremonial crown, an imperial shield, a set of silver-embossed horn drinking cups, a handwritten prayer book, crosses and a necklace from the 1868 battle last week. Some other European countries have also returned items to countries they have looted.