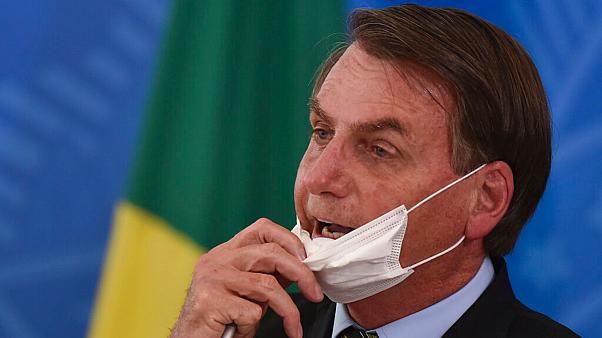 Brazil President Jair Bolsonaro tested positive for Covid-19 in an escalation of the health crisis that has engulfed Latin America’s largest economy.

“I’m perfectly well,” Bolsonaro told CNN Brasil in a live interview, after announcing the result of his test. He added he is taking hydroxichloroquine, an anti-malaria medicine he’s been touting as being effective against the virus though its use hasn’t been authorized by most health experts globally and could carry dangerous side effects.

Late on Monday, however, a video posted on YouTube showed a masked Bolsonaro trying not to get too close to supporters who awaited him in front of the presidential palace. He told them he was following social distancing orders from a doctor after showing symptoms of the virus, and added that an exam had shown his lungs were “clean.”

Brazil has become a global hotspot for the virus, trailing only the U.S. with more than 65,000 confirmed deaths and over 1.62 million total cases. It has implemented an erratic response to the pandemic, with the president often clashing with state governors and even his health minister over quarantine measures and possible treatments. Brazil’s health ministry is currently headed by an interim chief after Bolsonaro fired his first minister and a second resigned.

Read More: The Pandemic’s Worst-Case Scenario Is Unfolding in Brazil

Bolsonaro could be seen coughing during a Thursday broadcast on his social networks, when he sat next to six other people, none of whom wore a mask. Officials who were present included Regional Development Minister Rogerio Marinho and the chief executive officer of state-owned bank Caixa Economica Federal, Pedro Guimaraes. Since then, he has mingled with members of his administration and the general public, and had lunch with the U.S. ambassador to Brazil on Saturday.

It is not the first time Bolsonaro has been tested for Covid-19. In March, after multiple members of his delegation to a U.S. visit contracted the virus, he said he tested negative.

On June 25, he said during a Facebook live broadcast that he thought he had already contracted the virus.

Bolsonaro joins other world leaders who have been contamined by the virus, including Honduran President Juan Orlando Hernandez and U.K. Prime Minister Boris Johnson, both of whom were hospitalized during the treatment.