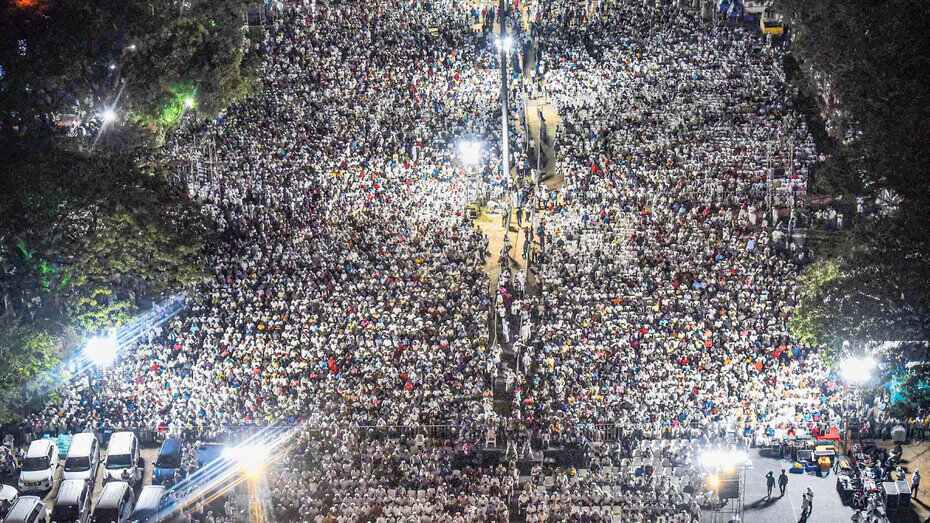 The rally against the Citizenship (Amendment) Act and the NRC winds its way through Kochi in Kerala on Wednesday. (PTI picture)

Huge turnout at peaceful rally in Kerala against CAA

By K.M. Rakesh in Bangalore

Muslim organisations, supported by people of other faiths and members of the civil society, on Wednesday closed ranks in Kerala to stage one of the biggest rallies in the country since the citizenship-related protests began.

The sweep and breadth of the crowd and the peaceful conduct prompted a senior Supreme Court lawyer to suggest that such non-violent political processes were the best alternative under the circumstances instead of every politician rushing to the court to challenge the changes to the citizenship law.

Organisers estimated that around 5 lakh people participated in the event held in Kochi, the commercial capital of Kerala.

The protesters flooded Kochi from across the state and began assembling in a stadium from 1pm before they began their long march to Marine Drive, about 5km away.

The extent of the response was such that when the convention began at Marine Drive a little before 6pm, some of the protesters were still leaving the stadium. An hour later, less than half of them could find a place in the overcrowded Marine Drive where several religious leaders and politicians from all parties had assembled to address the gathering.

The convention gave a call for a long-term agitation until the Centre withdrew the amendment and ensured that no discriminatory legislation would be implemented.

“I think this is the biggest rally by a united front of all Muslim organisations in Kerala. The speciality is the support from all other communities, political parties and intellectuals,” said Ebrahim Kunju, a former minister and one of the organisers.

The organisers had deployed thousands of volunteers to make sure the protesters maintained discipline and peace. The marchers carried placards with pictures of Mahatma Gandhi, B.R. Ambedkar and Maulana Abul Kalam Azad.

Inaugurating the rally, Indian Union Muslim League state president Panakkad Syed Hyderali Shihab Thangal told the gathering: “We are born in India and we will die in India since every Indian citizen has the right to do that.”

“Every like-minded Indian citizen will make sure that the Centre withdraws the citizenship act. This is a law that divides people on communal lines. We must not allow that,” the hugely popular leader said.

Sunni leader Kanthapuram Aboobacker Musaliar declared that the long march and the rally were only the beginning of a series of protests. He kept urging the gathering to maintain discipline but never lose any opportunity to question anything against the Constitution.

Aboobacker said: “We are a disciplined people. Without taking the law into our hands, and by staying within the parameters of the law we have the right to question everything.

“The only thing we are asking the Centre is what its problem is in allowing people to live peacefully based on the rights enshrined in the Constitution. Indian Muslims have never worked against the Indian ethos of unity in diversity. Tell me if there is a Muslim among those who killed Mahatma Gandhi and two Prime Ministers,” he said.

“We had the Babri Masjid judgment in which the Supreme Court found evidence about a mosque being demolished but then gave that land to build a temple. We kept quiet and urged all Muslims to maintain law and order,” he said.

“But this one is not like that. The CAA and the NRC discriminate against Muslims, and we will not take it lying down,” said Aboobacker.

Senior Supreme Court lawyer Kaleeswaram Raj, who was not at the rally, later told The Telegraph that “peaceful protests” would be the best option under the circumstances.

“I don’t agree with every political leader approaching the court against the CAA or any such legislation. There is no alternative to peaceful protests where people’s voice is heard. This is how political process differs from adjudicative process,” said Raj.

“We can’t follow America where they go to the court for everything. For example, lobbying is fine in America, but it won’t have the same results in India. But countries like France and Germany are good examples of how protests would work. But again the focus should be on peaceful protests,” he added.

The day was marked by similar protests in Kozhikode in north Kerala where a long march was held and a human chain formed in Kunnamangalam panchayat in the same district.