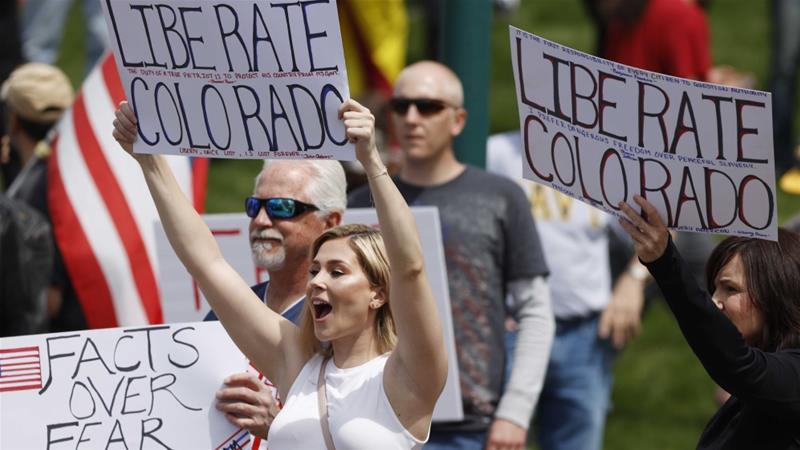 People protest against a state-at-home order issued by Colorado Governor Jared Polis to curb the coronavirus outbreak on April 19, 2020 in Denver, US [AP/David Zalubowski]

And the mishandling of the coronavirus pandemic is just another proof. 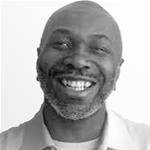 Sometime in the future, maybe two or three centuries from now, when historians and other social scientists begin to write the first books about the failures of the defunct American experiment, they will all confront a basic truth: That despite American proclamations of freedom and equality, the realities of racism, misogyny, homophobia, xenophobia and gross economic inequalities as practised in American society constantly belied these ideals.

Future experts will have to consider whether America’s ultimate virtues really ever had a chance to flourish, or were simply myths meant to soothe the American ego.

These future researchers will have a list of events to point to that signalled the death knell of America as a superpower, a nation-state, and as an idea worth pursuing. And that list is long:

The squandering of trillions of dollars from 1945 through the 1980s on the Cold War, Vietnam and the nuclear arms race. The presidency of Richard Nixon, Watergate, and craven government corruption. The disinvestment from the American social safety net and the massive deregulation of corporations that began during President Ronald Reagan’s rule in the 1980s – all while proclaiming “it’s morning in America again” – and continued unabated under Presidents Bill Clinton, George W Bush and Barack Obama. The First Gulf War in 1990-91 and the new US commitment to endless, preemptive wars in Afghanistan, Iraq and elsewhere in the decades since. The 2008 housing bust and the Great Recession that only further benefitted corporations while grinding millions down into poverty and the gig economy.

All this has led the US to its current calamity, the ongoing novel coronavirus pandemic, one that at publication, has claimed more than 40,000 American lives and sickened at least 700,000 others. It is an epic crisis which America’s leaders from President Donald Trump down could have blunted by heeding advanced warnings from the World Health Organization, from the Centers for Disease Control, and from the Obama administration, making preparations and taking action.

Trump could have mitigated the crisis but he failed miserably, opting first for denial, declaring the COVID-19 warnings the Democrats’ “new hoax”.

The COVID-19 outbreak has highlighted another epidemic that has plagued American society –  American narcissism, a disease that has been growing since the founding of Jamestown, the first permanent English settlement in North America, in 1607.

America’s narcissism was and remains more infectious than any virus, as the attraction of presumed wealth and unlimited success has been a salve for many Americans for generations, no matter how fantastical.

Let us look at how the US has responded to the coronavirus since the first reports of patients dying of severe pneumonia came out of the city of Wuhan in China in early January. The federal government never mobilised its authority and resources to provide kits for testing the potentially and actually infected here within the US (but apparently sent respirators, masks and other medical supplies to China in early February).

Once the virus infected Americans in Washington State in late January, little was done to immediately take its spread across the US seriously. It was all business as usual for the White House, for Congress, and for so many elected officials until the beginning of March, with the impeachment trial now but a blip on this election year’s calendar.

Once it became apparent that American leadership would fail to be proactive in preventing the spread of COVID-19, the nation’s me-first instincts kicked in. Toilet paper, bottled water, rubbing alcohol, liquid soap, surgical face masks, hand sanitisers, paper towels, orange juice and thermometers all began to disappear off supermarket and drug store shelves. Some Americans thought it a good idea to corner the market in these items as part of an attempt to profit from panic and deadly tragedy. Trillion-dollar businesses like Amazon did nothing to stop the hoarding, the panic and the exploitation.

The big corporations and the smaller businesses also did little to protect their employees before mid-March, even though every credible immunologist and epidemiologist urged social isolation and shelter-in-place orders days and weeks earlier.

It took the shutting down of face-to-face classes at Harvard and the NBA postponing the remainder of its 2019-2020 season before other universities, the sporting world, and other institutions began to shut down en masse. And that was mostly because both academia and professional sports are global in nature, an advantage and a liability when it comes to a pandemic.

America’s 50-plus states and jurisdictions, and Washington, DC have had 50-plus separate responses to the crisis, from a general lockdown in New York, Illinois, New Jersey and California to barely any precautions at all in Alabama, Florida and Texas until well into the pandemic’s impact on their states.

Even so, many Americans have violated even the most basic rules of social distancing, frolicking at beaches and attending public gatherings as if this crisis is one big national summer vacation.

In March, some, like Dan Patrick, Lieutenant Governor of Texas, went into amateur eugenicist mode, opting for despair over government action. Patrick’s message on FOX News? “Let’s get back to work, let’s get back to living. Let’s be smart about it, and those of us who are 70-plus, we’ll take care of ourselves, but don’t sacrifice the country.”

The lives of the elderly are apparently less important than the American economy’s stability. Trump, Patrick and other government officials have declared people rendered vulnerable by ageism, ableism, sexism and racism exploitable and expendable.

Governor Tate Reeves of Mississippi for his part signed an executive order that temporarily rescinded local bans on opening non-essential businesses and on social distancing, essentially ordering most state residents back to life as normal.

Meanwhile, Jerry Falwell Jr, the president of Virginia’s Liberty University and its evangelical leadership thought it wise to reopen for face-to-face classes again as the numbers of infected climbed by the thousands every day.

The need for profit over protecting the citizens of Mississippi? Jerry Falwell Jr’s blind evangelical faith over science and the welfare of thousands of students? Seriously?

But, just like with American narcissism, American racism has grown from the same toxic soil that combines greed and a craving for power with a total disregard for whole swaths of humanity. America’s narcissism and racism work hand in glove. Why else would Trump deliberately scratch out the word “corona” in his talking points and replace it with the “Chinese virus” for a press briefing in mid-March?

Why else have there been over 1,100 anti-Asian and anti-Chinese incidents and attacks in the past month in the US? How could there be any other explanation for hacking online classes and disrupting them with racist rhetoric?

Without a doubt, the penchant for narcissism and racism and the othering of so many as exploitable and expendable are interconnected, both historically and in the COVID-19 crisis in the US.

All the while, America’s most vulnerable have hardly been given a thought. The patchwork nature of the US healthcare system means that millions living with poverty, homelessness, incarceration, disabilities and psychological illnesses will likely be exposed to the coronavirus in the next weeks and months.

They will represent a disproportionate number of the 200,000 experts predict will die from the virus in the next 12 or 18 months. They will not have the benefit of medical care necessary to keep them alive. They will not partake in the $2 trillion Congressional stimulus package mostly meant to shovel more money down the throats of the nation’s corporate monopolies.

For so many who are not immediately vulnerable, the pittance of funds from this stimulus meant for ordinary Americans will be way too little and come way too late. So many more will join the ranks of the unemployed, the underemployed, the permanently and temporarily homeless, as well as the jailed, the sick and the dead.

America’s lack of leadership at home and abroad during this pandemic has been stunning. But its populace’s denial of these facts is simply gobsmacking.

The truth is, many Americans barely care about other Americans, especially those who are black and brown and especially during this pandemic. This is what 400 years of racism and narcissism have led to. Most Americans either do not care that much of this allegedly natural devastation stems from globalisation and climate change, or act as if there is nothing that can be done about it. The COVID-19 crisis is yet another log on the stack of America’s enduring shame as the world’s most powerful and yet most do-nothing nation.

Is America really over? Yes, it will remain a superpower and a rich nation for the foreseeable future, but with so much of that power and wealth ever more consolidated into the hands of rich whites and the corporations.

The coronavirus pandemic will not plunge the US into darkness. But this crisis is an omen, a truly horrifying sign that the US as both a stable nation-state and a symbol of freedom and goodness is a bald-faced lie.

Anyone who believes otherwise or who fights for such ideals while also hoping to preserve America as it currently stands is not only promoting American narcissism and racism, but also guaranteeing future calamities. They will ultimately be as responsible for America’s failure to fulfil its fanciful experiment as every president since Lyndon Johnson.

Donald Earl Collins is a Lecturer of History at American University in Washington, DC.

The article is first published in Al-Jazeera News