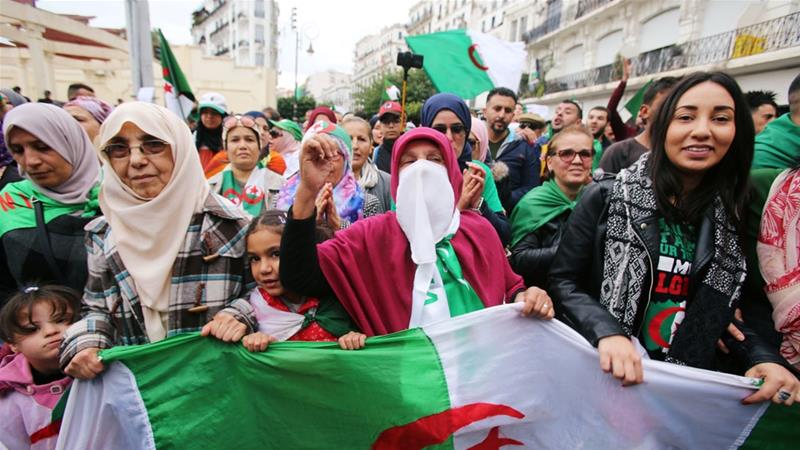 Demonstrators take to the streets for the 40th consecutive week, demanding cancellation of December 12 election.

Tens of thousands of Algerian protesters have rallied in the capital Algiers and cities across the country demanding that a presidential election scheduled for December be cancelled.

Draped in Algeria‘s tricolour flag, demonstrators in central Algiers chanted slogans against the army high command and its chief of staff, Lieutenant General Ahmed Gaid Salah, as they marked the 40th week of the nationwide movement.

The powerful military chief has maintained that a presidential election is the surest way to break the country’s political deadlock, pointing out that people’s key demands have already been met, including the detention of officials suspected of corruption.

Demonstrators, however, insist that all members of the old guard, including interim President Abdelkader Bensalah and Prime Minister Noureddine Bedoui, former associates of Bouteflika, be removed.

Activists in recent days called on people to take part in night-time protests to reject the vote, which they said will allow the current system to remain in place with a few “cosmetic” changes.

“Algerians are rejecting December’s election because they see it as an attempt to regenerate the system,” said Zine Labidine Ghebouli, an Algerian analyst.

“This is especially the case considering the repressive measures being taken by the authorities to impose the election,” said Ghebouli, referring to the arrest of several high-profile activists and politicians.

Security forces on Thursday arrested more than 80 people during a night-time protest in Algiers, according to a prisoners’ rights committee.

Though campaigning for the election officially kicked off on Sunday, the five candidates – all senior Bouteflika-era officials – public appearances have seen a dismal turnout, with disgruntled attendees at times interrupting presidential hopefuls and haranguing them for taking part in the vote.