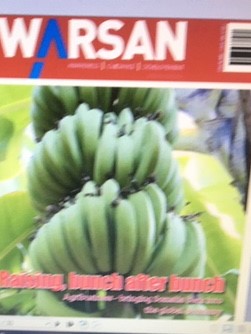 Once again, Somalia’s bananas are selling internationally, with Saudi Arabia and Turkey being the initial destinations. This is big news and an important step in nation-building, one revived and now being spearheaded by Growth, Enterprise, Employment & Livelihoods (GEEL), a program run and funded by the United States Agency for International Development (USAID) since 2016.

Our story on Somalia’s Holodomor– literally ‘death by hunger’– in our last issue attracted unprecedented interest from readers. In it, we revealed that a number of organisations have made it their sole mission to make it impossible for farmers to engage in any sort of rewarding agricultural activities, by flooding the market with cheap goods and substandard products, which essentially renders local farming pointless.

But while we verified some of those sad truths, we also found GEEL to be a different sort of kettle of fish altogether.

Mohamed Abdinoor is the Chief of Party of GEEL. He told Warsan Magazinethat all they do in Somalia is underlined by the broad objective of improving the country’s productivity in general.

GEEL works in collaboration with the ministry of Agriculture and Irrigation, Somali farmers and traders. The organisation offers assistance to farmers by way of efficient technologies and skills, as well as water management – including irrigation. In water management technology, GEEL offers products and services on dam liners, Super Absorbent Polymers (SAP) and solar-powered irrigation.

The cumulative effect of these “small” efforts has been higher yields at compressed costs.

“GEEL works to‘promote inclusive economic growth through activities that address challenges and opportunities that are common among multiple sectors, and initiatives that affect key industries, particularly agriculture, fisheries, and renewable energy,” Abdinoor said. “Among its achievements is the creation of permanent employment for 3,320 people, and enabling sustainable income to tens of thousands of others.”

When you encounter Hersio Abdulle Said for the first time, you will immediately come away with one conclusion: she is a sharp-witted woman.Although her life has been one challenger after another,she has never allowed them to bog her down.

Hersio, as she is popularly known, is the founder and executive director of SOMfreshFruits and Vegetables, an enterprise that specializes in the production and selling of fruit such as banana, mango and other forms of fruit; it is headquartered in the Wadajir District of Mogadishu.

“For years now,SOMfreshFruits and Vegetables has supplied yellow banana and other fruits and vegetables to major hotels in Mogadishu and to other regions of Somalia,” she told Warsan Magazine when we paid her a visit.

Her company, she says,endeavors to engage highly competitive agribusinesses that supply world-class fresh fruits and vegetables to local and foreign markets. She specifically deals in fresh banana, mango, lemon, papaya and grapefruit,as well as vegetables that include coriander, lettuce, spinach, green paper and tomatoes.Her primary objective, she says, is to encourage the consumption of fruit and vegetables by Somali families, to improve their nutrition and promote a healthy lifestyle.

“It all began with my tendency to thoroughly clean my bananas before feeding them to my children. Whenever my friends or relatives visited, they’d always wonder why the bananas in my house looked different from the ones in the market.My secret lay in cleaning storing them the correct way – as a result they were yellower and had a sheen to them. My brothers began talking me into venturing into selling bananas. Then running a small business in the Bakara market, I initially rejected the idea.”

Then, in 2003, her husband died, forcing her to abandon her business to move to the northern part of the country, before heading back to Mogadishu in 2010.The following year,she partnered with one of her brothers to open a banana business in their neighborhood. In 2013,SOMfreshFruits and Vegetables was registered as a company.

“I want my company to grow into a highly respected brand locally and around the globe for marketing and supplying high-quality,world-class fruit and vegetables,which meet global standards and keep customers satisfied,” Hersio says.

As her business has flourished and, with it her skills in handling and selling quality fruit, she too has become a favorite of many hotels and home owners, who consider her product to be of a better quality than what the competition offers. It is how she obtained the nickname Mama Moos which translates to the ‘Banana Mum’. In a word, business is brisk.

It has not been an easy journey. Like with every big city, entrenched cartels stood in her way to the point that supplier would gang up to deny her the fruit she needed. But because people loved her store, rather than return empty-handed to disappointed customers, she would often buy her product at an extra cost – that was the cost of her acumen.

She points a finger to a clique that wanted to dominate and monopolize the banana market. But Hersio was determined to “conquer the market.”

“At some point, my accusers began a rumor that I was selling poisonous bananas. I lost some customers as a result.”

From those crippling beginnings, Hersio now runs one of the biggest banana distribution companies in Mogadishu. She employs close to 100  people. Among st her assets are four vehicles she uses to deliver order across the city.

Describing herself as a marketer,Hersio says she is self-made, and wants to conquer more than just Mogadishu.

“I want to be able to supply to both local and foreign markets. Now, I understand that this will be an expensive endeavor, but I am not alone. Whenever I have been strapped for cash,I have always had GEEL (Growth, Enterprise, Employment & Livelihoods)to support me, particularly with constructing storage facilities; for that I thank them. I hope, when the time comes, I can get more investors to partner with,” she concludes.