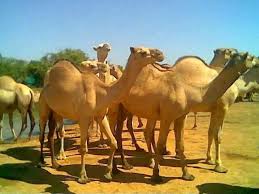 The coronavirus pandemic has wreaked havoc on trade and supply chains around the world. Not even the niche market in camels is immune.

Somalia usually ships millions of camels, goats, sheep and cattle across the Red Sea to Mecca around this time of year for Islam’s hajj pilgrimage, which begins on Wednesday. Normally, as many as 2 million people converge on the holy city and slaughter animals as sacrificial offerings.

But this year Saudi Arabia has restricted the number of pilgrims to just 1,000 to contain the spread of the virus. Around 270,000 people in the kingdom have tested positive, more than anywhere else in the Middle East aside from Iran.

That’s bad news for Somalia, which has the world’s largest number of camels and relies on livestock for 70% of its exports. The Horn of Africa nation sold $533 million worth of animals in 2015, the vast bulk of them to Saudi Arabia, according to the World Bank.

Many breeders are being forced to sell their camels for $500 to local buyers, half what they’d typically get for an exported animal, according to Action Against Hunger.

It’s just the latest headache for Somalia, which has been trying to rebuild an economy shattered by more than two decades of civil war and an insurgency by al-Shabaab, an al-Qaeda-linked group. In recent months, Somalian farmers and herders have had to contend with a plague of crop-eating desert locusts and severe flooding.

“The cancellation of hajj completes the biggest nightmare,” said Ahmed Khalif, Somalia country director for Action Against Hunger. “It is a big blow for the whole Somali livestock industry.”

Most of the rural population depends on livestock directly or indirectly, according to the Rome-based Food and Agriculture Organization. It estimates that Somalia has about 7 million camels, double the number in Sudan, home to the second-biggest herd.