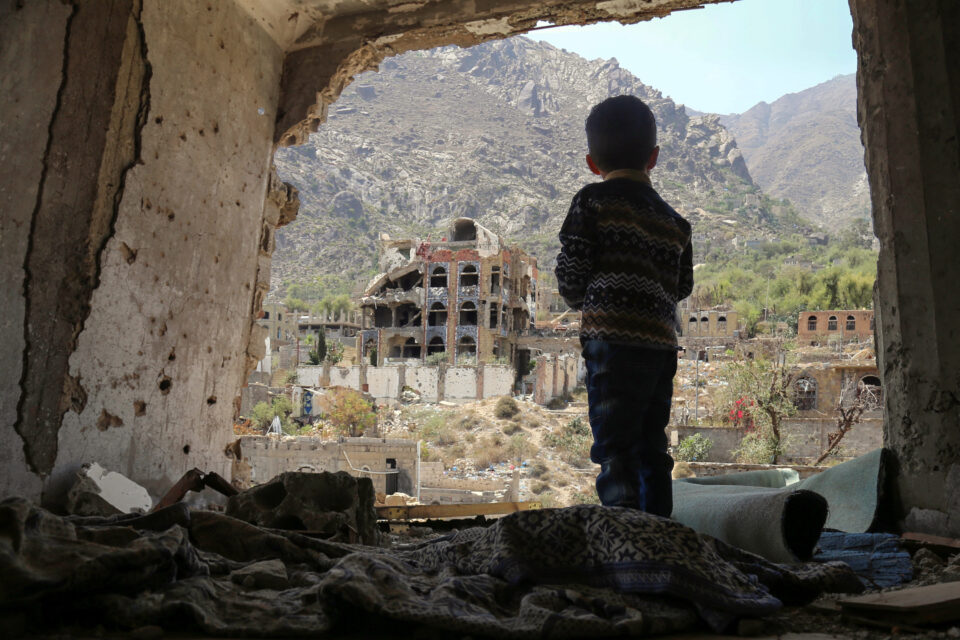 The president seems fine with keeping the Middle East awash in US arms, one of many strikes against this $23B UAE deal.

The Biden administration’s recent announcement giving a green light to a massive $23 billion weapons sale to the United Arab Emirates makes a mockery of its commitment to put human rights at the forefront of its foreign policy. The Emirates’ disastrous roles in Yemen and Libya, along with its vicious human rights record at home, should disqualify it from acquiring advanced weapons.

The deal was negotiated under the Trump administration and came to light less than a week after Donald Trump announced the normalization of relations between Israel and the UAE, known as the Abraham Accords. While the public was regaled with Trump’s supposedly brilliant peace initiative, the secret clause that sweetened the deal was leaked: The U.S. would sell billions of dollars of weapons to the Gulf state — 50 F-35 fighter jets, 18 Reaper drones, and various missiles, bombs and munitions. The UAE and Israel have never been at war and had maintained unofficial ties for years, but the “peace accord” allowed the Trump administration to circumvent a policy that requires the United States to guarantee Israel’s military superiority in the region. The administration also framed the sale as necessary for the UAE to counter the threat posed by Iran.

Israeli Prime Minister Bibi Netanyahu, ever the king of political drama, initially feigned outrage that another Middle East country besides Israel would possess the high-tech F-35s, but it was soon revealed that the Prime Minister had been in the know from the start and had approved the deal with his own caveat: Israel would get additional U.S. weapons to “balance” those going to the UAE.

Congressional opponents of the arms deal responded by introducing a bipartisan resolution of disapproval to block the sale. Surprisingly, hawkish Senator Bob Menendez (D-N.J.), chairman of the Senate Foreign Relations Committee, led the resolution with Senators Chris Murphy (D-Conn.) and Rand Paul (R-K.Y.). They cited concerns about the timing as a rushed end-run around Congress, the UAE’s troubling involvement in Yemen and Libya, and the UAE’s military relationships with Russia and China. Though their legislation was voted down, when Joe Biden came into office, the State Department put this sale, as well as a weapons deal Trump had negotiated with Saudi Arabia, on hold. Human rights groups were encouraged that the Biden review might lead to a quashing of the deal but, apparently, geopolitical pressures, the hawks in the administration, and pressure from the weapons lobby have won the day. 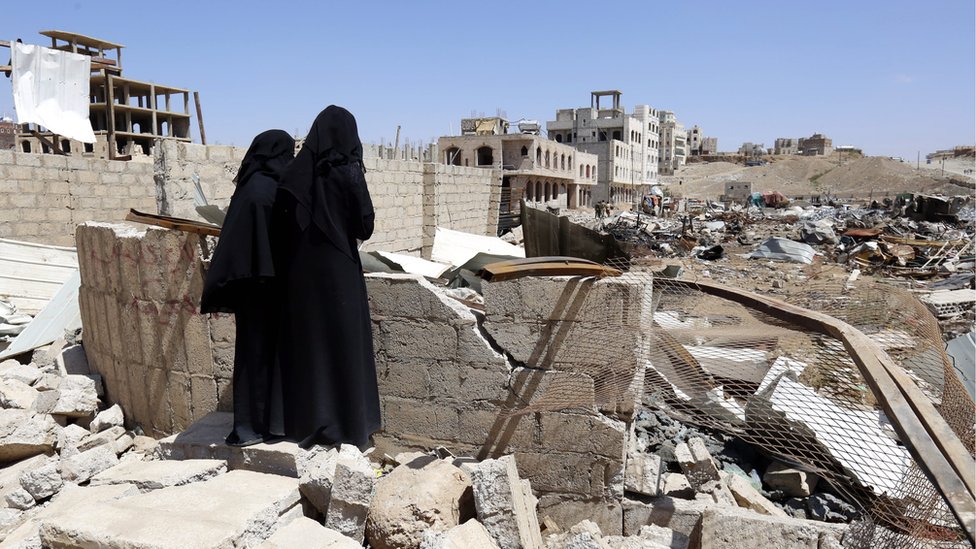 The companies that stand to gain hefty profits from this sale include Lockheed Martin, Raytheon, General Atomics and Northrop Grumman. Lockheed Martin will get $10.4 billion selling 50 of its F-35s. According to The New York Times, Raytheon, the biggest supplier of the bombs, lobbied the Trump administration for the deal. Trump’s Secretary of Defense Mark Esper was a lobbyist for Raytheon and Biden’s Secretary of Defense Lloyd Austin is a former Raytheon board member.

The UAE’s role in Yemen should have been enough to quash the deal. For the past six years, a U.S.-supported coalition led by Saudi Arabia has been waging a war in Yemen so brutal that according to David Beasley, executive director of the World Food Program, this war-torn nation is “hell on earth” where one Yemeni child dies every 75 seconds.

In 2017, Human Rights Watch and the Associated Press accused the UAE of operating secret prisons in Yemen where prisoners were subjected to horrific forms of torture. Former inmates describe cramped conditions covered in feces, being beaten, sexually assaulted, and trussed up on a “grill.” “We could hear the screams,” said a former detainee held for six months at the Rayan airport. “The entire place is gripped by fear. Almost everyone is sick, the rest are near death. Anyone who complains heads directly to the torture chamber,” said one former detainee.

In addition to its direct involvement, the UAE supported local proxies — around 90,000 fighters — providing them with direct training, capacity building, logistics assistance, and salaries. It also brought in mercenaries from as far away as Colombia, and weapons sold to the UAE ended up in the hands of al Qaeda-linked militias inside Yemen.

Complaints have been filed in courts in the UK, Turkey, and the U.S. alleging that UAE mercenaries in Yemen committed human rights abuses and war crimes. They also allege that the UAE joined the Saudis in enforcing a naval blockade that has kept fuel, food, and medicines from people in need, committing over 30 fighter jets to carry out airstrikes and naval ships to enforce the coalition’s blockade.

Anxious to get out of a losing war that has been so bad for its image, the Emirates held a ceremony on February 9, 2020, to mark the end of their involvement in the Yemen war, moving from a “military-first strategy to a peace-first strategy.” But humanitarian groups on the ground tell us that the UAE maintains a presence in Socotra, Mukallah, and a small presence in Aden. In addition, it offers financial and military support to a variety of armed groups and political movements that have had a destabilizing influence throughout the country, particularly in the South. 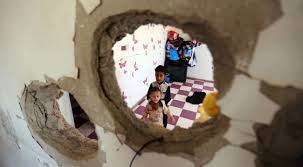 its support for General Khalifa Haftar in his unsuccessful fight against the internationally recognized government in Tripoli. The U.N. found the UAE to be violating the U.N. Security Council arms embargo on Libya by supplying combat equipment to Haftar’s militia, a group known for its human rights abuses. A 2020 U.S. Department of Defense report accused the UAE of funding and supporting Russian mercenaries in Libya and a January 2021 report by the Panel of Experts on Sudan found that the UAE has had “direct relations” with armed groups from Sudan’s Darfur region fighting in Libya.

A complaint filed in the U.S. District Court by the New York Center for Foreign Policy Affairs on behalf of victims of UAE actions in Libya contends that “widespread and publicly available evidence suggests that the weapons being sold will be used in direct contravention of world peace and U.S. security, as well as prior U.S. policy.”

Another strike against the sale is that it is fueling the Middle East arms race. While the UAE is set to become the first Arab state to acquire F-35s, it will not be the last. Qatar has already asked to purchase them and Saudi Arabia will likely follow. Israel is expecting additional arms beyond the $3.8 billion they already receive annually from the U.S. in military assistance. The sale is also increasing tension with Iran at a time when the Biden administration is trying to get Iran not only to wind back its nuclear program but also to reduce its ballistic missiles and military activities in the region. Surely stepping up arms sales to a key Iranian adversary will be a disincentive for it to demilitarize.

A final reason to oppose the deal is the UAE domestic situation. Prince Mohammed bin Zayed is a shrewd Middle East dictator who uses his country’s military and financial resources to thwart moves toward democracy and respect for human rights under the guise of fighting Islamic terrorism. The UAE restricts freedom of expression and silences dissent. Homosexuality and apostasy are capital offenses in this Muslim country, and legal punishments still on the books include stoning, amputation, crucifixion and flogging. According to Amnesty International, in 2020, despite the COVID-19 pandemic, the UAE continued to detain dozens of prisoners of conscience, including prominent human rights defender Ahmed Mansoor. The government keeps opponents under arbitrary detention and a number of prisoners remain incarcerated despite having completed their sentences. On April 15, 2021, a cross-party coalition of European parliamentarians condemned the systematic crackdown on freedom of speech and expression, and called for the release of all prisoners of conscience, an end to torture and ill-treatment of these prisoners, and the protection of prisoners’ families from collective punishment.

Another group subject to all kinds of abuses are the millions of migrants who work in the Emirates under the kafala system, a type of visa sponsorship system that deprives workers of basic rights.

Faced with domestic crises that include a pandemic, a battered economy and exploding racial tensions, President Biden understands the need to focus his attention on domestic issues and wind down U.S. military entanglements from the past two decades. His recent announcement that U.S. troops will leave Afghanistan by September 11, 2021, reflects this.
But a $23 billion weapons sale to the UAE is a disastrous move in the opposite direction. It puts the U.S. squarely on the side of a serial human rights abuser and inflames a region already awash with way too many weapons. A new round of legislation by Senators Menendez and Feinstein is being introduced to put checks on the sale of the F-35s, but it is the entire sale that must be questioned. If Biden refuses to put domestic and human rights concerns ahead of the profits of weapons manufacturers, then Congress must step in and pass legislation to stop him.