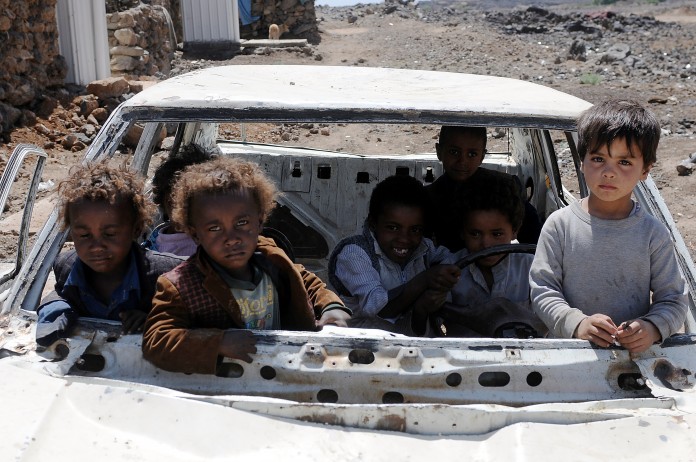 “Most of the malnutrition cases from remote areas couldn’t survive because of transportation difficulties,” a doctor at Sanaa’s Al Sabeen hospital said.

“It used to take about three hours. But the war changed everything,” said Fakin.

The mountainous Hajjah province is a frontline between the Saudi-led coalition and the Houthi militia, which is now controlling Sanaa. When Amir’s situation quickly deteriorated and doctors in Hajjah couldn’t help him, his father decided to embark on a perilous journey to Sanaa, where a shimmering ray of hope awaited.

So, with the help of a charity group, Fakin went through checkpoints, battlefields, and even landmine fields to reach here with his ailing son, who is six-year-old but still looks like a toddler.

“Most of the malnutrition cases from remote areas couldn’t survive because of the transportation difficulties. They often have to take alternative ways that are longer, harder, and more dangerous as their usual ways were cut by the conflicts,” said Abdul Malik Al-Wahidi, a doctor at the malnutrition ward in Sanaa’s Al Sabeen Hospital, where Amir received the treatment.

The hospital is the main health center for malnutrition treatment and receives hundreds of starved children every month. The wards are full of heartbreaking crying of the malnourished children.

The United Nations said last Friday that severe acute malnutrition is among its highest levels in Yemen, threatening the lives of half of the country’s children under the age of five.

Nearly 2.3 million children under five are projected to suffer from acute malnutrition this year, 400,000 of whom could die if they do not receive urgent treatment, according to new figures of UN agencies.

Malnutrition damages physical and cognitive development, especially during the first two years of a child’s life, the agencies warned.

Dunya Abdu Ghalib, a four-year-old girl that only weighs 6 kg, is one of the children with severe symptoms. She is in constant pain, and her skin is covered by large squamous, black-purple bruises.

“For years, my daughter has been suffering and we had tried to find a cure for her as much as we could, but nothing was in our hands. We are poor and no one did assistance to us,” Dunya’s father Abdu said.

Abdu said he felt lucky that the hospital could take his daughter in. But the hospital itself faces serious problems such as lack of funds and medical supplies.

“International organizations cut their supports to health centers, including the ones that are combating malnutrition. Meanwhile, the intensifying conflict led to the soaring of malnourished cases and they rushed to our hospital. We are overrun now,” said a doctor at the hospital.

Yemen has been mired in civil war since late 2014 when the Iran-backed Houthi rebels seized control of several northern provinces and forced the Saudi-backed government of President Abd-Rabbu Mansour Hadi out of the capital Sanaa.

The Saudi-led coalition intervened in the Yemen conflict in March 2015 to support Hadi’s government. The war has killed tens of thousands of people, displaced 4 million, and pushed the country to the brink of famine.