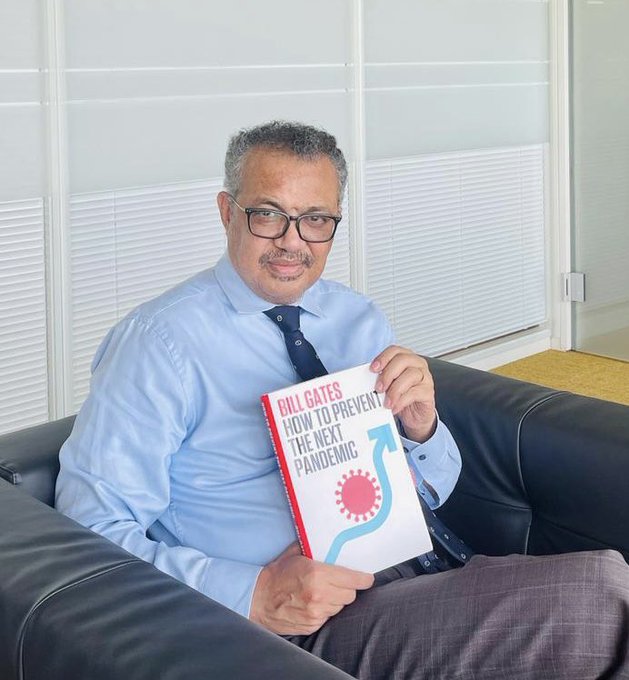 World Health Organization director Tedros Adhanom Ghebreyesus praised the latest book by billionaire and self-styled pandemic ‘expert’ Bill Gates on Friday, declaring himself in full agreement with the software tycoon’s insistence that “we must act on Covid-19’s lessons and innovate so that we can deliver swift, equitable health solutions to prevent the next pandemic.”

The public health official tweeted a photo of himself with the tome, tagging the Gates Foundation, the Microsoft founder’s public health policy-making vehicle and one of the primary financial benefactors of the WHO.

While Gates is not a certified medical expert – he never finished college, instead dropping out to form Microsoft with a childhood friend – his massive wealth has allowed him to effectively dominate global health policy as the largest private contributor to the global health body, behind only the US government in terms of funding.

The deep-pocketed vaccine evangelist took the stage for a TED Talk in Vancouver on Tuesday to elaborate on the ideas presented in the book, titled “How to Prevent the Next Pandemic,” which calls for a $1 billion global emergency response team operating under the clever acronym GERM – Global Epidemic Response and Mobilization. The group would be comprised of 3,000 doctors, epidemiologists, policy and communications experts, and diplomats operating under the direction of the WHO.

Gates scolded rich countries for taking less action to flood poorer nations with vaccines than he “expected” – and repeatedly demanded over the course of the Covid-19 pandemic. He called for developed nations to unite to implement systems that would prevent another pandemic, arguing that “your survival [with Covid-19] depended partly on your income, your race, the neighborhood you lived in.” However, the US, one of the wealthiest countries in the world, also had one of the highest death tolls from the disease, faring noticeably worse than many African nations.

The billionaire philanthropist’s ideas appear to dovetail with the WHO’s own plans for a global pandemic treaty, currently being negotiated in order to “set out the objectives and fundamental principles in order to structure the necessary collective action to fight pandemics.” Heavy on surveillance, vaccinations, and “restoring trust in the international health system,” the agreement would be legally binding under international law, superseding the regulations of individual countries and ensuring all nations act as one in response to future outbreaks.

First devised by European Council president Charles Michel in November 2020, the agreement was outlined in a call for an “international treaty on pandemic prevention and preparedness” issued in March 2021 by a group of 25 heads of government and NGOs. Their publication declared that no single government, or even public-private partnership like the WHO, could sufficiently address the problems that would come with future pandemics and called for a treaty “rooted in the constitution of the World Health Organization” and backed by existing “International Health Regulations.” It was quickly backed by the G7 and World Health Assembly.

The idea of such an all-powerful entity being drawn up and foisted upon humanity without a public vote has rubbed many the wrong way, and groups like the World Council for Health have scrambled to mount an opposition to the plan, but it’s questionable that any grassroots opposition mounted at the eleventh hour will be able to challenge an effort backed by all 194 members of the WHO. The body plans to confirm its pandemic agreement at the 2024 World Health Assembly.

Ukraine and Tigray: A Hierarchy in the Value of Human Life