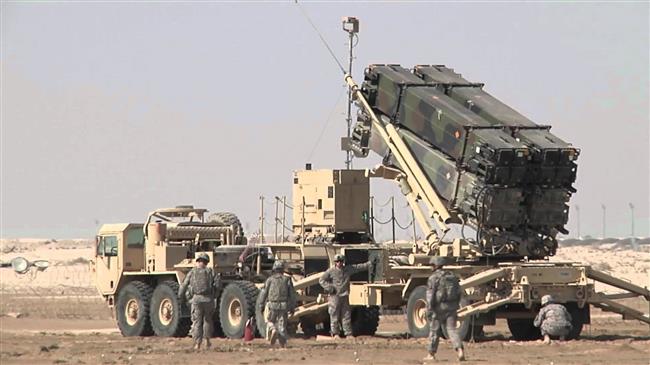 The withdrawals are part of an attempt by the administration to further reduce the US’s presence in the Middle East, according to the report.

By TZVI JOFFRE
APRIL 2, 2021 08:51
Specialist Tevin Howe and Specialist Eduardo Martinez take part in training on a U.S. Army Patriot surface-to-air missile launcher at Al Dhafra Air Base, United Arab Emirates, January 12, 2019. Picture taken January 12, 2019. U.S. Air Force/Tech
(photo credit: SGT. DARNELL T. CANNADY/HANDOUT VIA REUTERS)
Advertisement
The US has removed at least three Patriot antimissile batteries from the Gulf region, despite recent waves of Houthi drone and missile strikes against targets in Saudi Arabia, as part of a move to shift military capabilities from the Middle East, The Wall Street Journal reported on Thursday.
In addition to the Patriot batteries, an aircraft carrier and surveillance systems are also being moved to other locations to answer military needs elsewhere, with additional reductions under consideration, US officials told The Wall Street Journal.
The Terminal High Altitude Area Defense, or THAAD, missile defense system was also proposed for removal, but is currently set to remain in the region, the officials added.
The withdrawals are part of the early stages of an attempt by the Biden administration to further reduce the US’s presence in the Middle East, according to the report. Some equipment may be redeployed to focus on China and Russia instead.
Despite the withdrawals, a Pentagon team is looking into equipment and training that can be shared with Saudi Arabia to help them protect itself from missile, rocket and drone attacks from Iranian-backed forces in Yemen and Iraq.
Options include selling the kingdom defensive weapons, expanding intelligence-sharing, additional training and military-to-military exchange programs, officials told The Wall Street Journal.
“The Saudis have been pretty effective at knocking this stuff down. They are doing better and better,” a senior US official told The Wall Street Journal.
“The bottom line is that the Houthis need to know that we are standing with the Saudis and we will continue to support their right to self-defense,” another US official stated.
In January, the Biden administration froze the sale of precision-guided munitions to Saudi Arabia, with US officials working to define which defensive weapons they would allow the Gulf nation to buy.
The new administration’s relationship with the kingdom has been somewhat stricter, with Biden pledging to recalibrate the relationship after he took office and publishing an intelligence reports which blamed Saudi Crown Prince Mohammed bin Salman for approving the operation that led to the killing of journalist Jamal Khashoggi in 2018.
Despite the report, US Acting Assistant Secretary of State for Near Eastern Affairs Joey Hood told the Saudi news outlet Al-Arabiya on Thursday that no final decisions had been made by the Department of Defense yet and that he “wouldn’t make any predictions on any of them.”
Hood stressed that troops and equipment “redeploy all the time” and that the US’s “commitment to the safety, security and stability of [its] partners throughout the Middle East is not changing, and it never will.”
The state department official added, however, that countries in the region were becoming more capable of protecting themselves, meaning that the US didn’t need to station as much equipment or people in the region anymore.
“As our partners become more and more capable and able to take on more tasks by themselves, well, it doesn’t make as much sense for us to have people and expensive capabilities there. So that’s actually a mark of success in many ways,” said Hood to Al-Arabiya.
Additionally, in response to questions about the Wall Street Journal report, Pentagon Press Secretary John Kirby stressed during an off-camera press briefing that the US continues “to support the defense of Saudi Arabia in partnership with the Saudi military, including their abilities to counter inbound threats.”
“I am — am not going to get into specific capabilities that are in specific places, and for how long they will be. I — I think I need to just leave it at that,” added Kirby, who stressed multiple times that he would not confirm the report, “particularly in that part of the world.”
In response to a question about whether the US is moving resources to face China, Kirby stated that “it should be lost on nobody” that the secretary of defense’s first overseas trip was to the Indo-Pacific region to meet with US allies and partners on tensions in the region, which he added were “in many ways, being propelled by China’s aggressive activities and their excessive maritime claims and – and military modernization.”
Tensions between China and the US have increased in recent years, with both the Trump and Biden administrations taking a hard stance on their global rival.
In a March meeting between US Secretary of State Antony Blinken and national security adviser Jake Sullivan and China’s top diplomat Yang Jiechi and State Councilor Wang Yi in Anchorage, the two sides sparred with unusually blunt public remarks, according to Reuters.
“We will…discuss our deep concerns with actions by China, including in Xinjiang, Hong Kong, Taiwan, cyber attacks on the United States, economic coercion of our allies,” said Blinken at the time. “Each of these actions threaten the rules-based order that maintains global stability.”
“The United States uses its military force and financial hegemony to carry out long arm jurisdiction and suppress other countries,” said Yang. “It abuses so-called notions of national security to obstruct normal trade exchanges, and incite some countries to attack China.”
Via Jerusalem Post
——————————————————————————————————————————————————————————