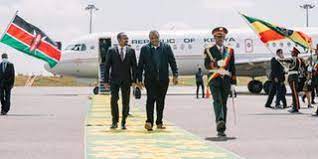 President Uhuru Kenyatta on Sunday evening returned to Nairobi from a trip to Addis Ababa, his second in a month, as the region called for dialogue to end strife in Ethiopia.

President Kenyatta’s trip, whose details were not publicised beyond the photo opportunity, was nonetheless laden with symbolism, just over 24 hours before US Secretary of State Antony Blinken lands in Nairobi to discuss regional security among other issues.

In Addis Ababa, the Kenyan Head of State met senior leaders in the Ethiopian government including Prime Minister Abiy Ahmed and President Sahle-Work Zewde as well as representatives of political parties in the country seen as key influence pushers in Ethiopia. Diplomatic sources told  Nation.Africa  President Kenyatta had travelled “in search of peace.”

He was in Addis Ababa just over a month after he visited the country to witness the inauguration of the new government of Prime Minister Abiy and his Prosperity Party following elections back in June.

But the country has been troubled since last year in November when the government launched what it called a law enforcement operation against the Tigray People’s Liberation Front (TPLF). The violence has since led to thousands of deaths and displacements, forcing the international community to call for truce.

President Kenyatta had earlier this month asked warring to compromise and negotiate for a peaceful solution, which has yet to come to pass. The trip on Sunday is being seen as a further briefing session for the President ahead of a meeting with Blinken.

Although the US has threatened sanctions, the President and the African Union in general has warned against imposing punitive measures, warning the Ethiopian conflict is complicated.

Blinken’s team said on Friday ahead of the trip that sanctions will remain on the table, albeit their execution will be delayed to give dialogue a chance. The US has in the past urged Kenya to mediate in the conflict although Washington said last week it endorses the work of AU High Representative for the Horn of Africa Olusegun Obasanjo.