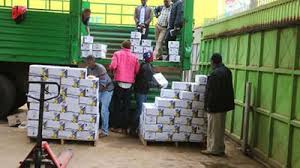 Uganda will this week seek to find solutions to the continued blockade of its exports, failure of which, it will seek intervention of the East African Court of Justice.
Government, according to Ministry of Trade, will present its case before the East African Summit.
The summit, which involves a number of hybrid meetings, is ongoing and will climax with the Heads of States meeting.Mr Emmanuel Mutahunga, the Ministry of Trade commissioner external trade, yesterday told Daily Monitor, government had been engaging and will continue to engage member states to solve the trade wars, with a further push expected during the during the ongoing summit.
However, Mr Mutahinga noted: “If this fails, our next route will be taking the matter to the East African Court of Justice.”Ugandan manufacturers, especially those involved in the export market, have suffered at the hands of EAC partner states, which have continuously blocked entry of some goods without explanation.
A number of goods, key among them milk, sugar, poultry and beef products, among others have been blocked particularly from entering Kenya with claims that are not well explained.

Mr Daniel Birungi, the Uganda Manufacturers Association (UMA) executive director, said it was unfair that Uganda continues to play second fiddle, acting as a supermarket for other countries’ goods yet its products are denied entry into markets of partner states.
UMA last year gave government an ultimatum of up to last Christmas within which it had been required to address the blockades or mobilise within manufacturers for a way forward.

However, no details have been given two months after the expiry of the ultimatum.
Trade wars have cost Uganda in different sectors, especially sugar, where stockpiles have grown to nearly 150,000 tonnes after manufacturers and suppliers were closed out of some EAC member states.
Mr Birungi in the November statement which gave government an ultimatum said, it was surprising that EAC member states were finding “reasons to bar our products from entering Kenya and in some cases Tanzania.

In 2019, Tanzania blocked Uganda’s sugar from entering its market only to allow 20,000 tonnes in 2020 but that was also stopped.
Kenya continues to impose a ban on Uganda’s milk only easing the one on sugar to allow 90,000 tonnes.
However, Mr Jim Kabeho, the Uganda Sugar Manufacturers Association chairman last month told Daily Monitor they had not received permits to start shipping the sugar.

Trade decline
According to a Ministry of Finance economic performance report for the period ended November, during October, exports to East African Community region declined from $102.9m in October 2019 to $82.2m, marking a sustained decline in almost two calendar years.
During this period Uganda’s exports to East Africa suffered 20 per cent decline, representing a drop of $20.7m (shs75.5b) compared to the same period in 2019.
This was partly blamed on a hostile environment, characterised by non-trade barriers and blockades on a number of goods originating from Uganda.