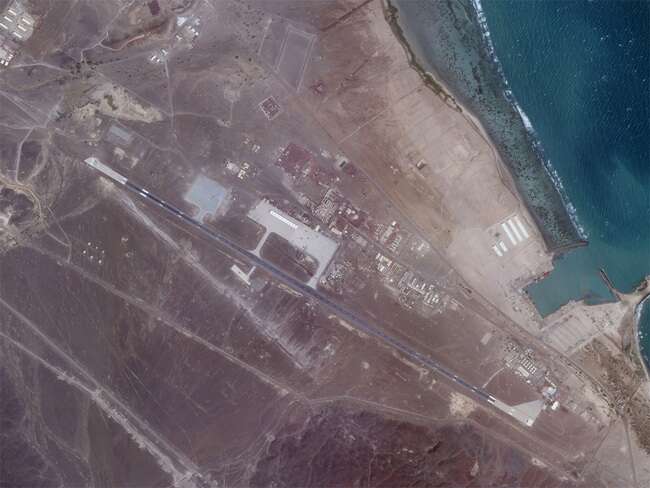 Feb 18, 2021, 12:32 PM IST
The United Arab Emirates is dismantling parts of a military base it runs in the East African nation of Eritrea after it pulled back from the grinding war in nearby Yemen, satellite photos analyzed by The Associated Press show.

The UAE built a port and expanded an airstrip in Assab beginning in September 2015, using the facility as a base to ferry heavy weaponry and Sudanese troops into Yemen as it fought alongside a Saudi-led coalition against Iranian-backed Houthi rebels there ..

But the country once praised as “Little Sparta” by former U.S. Defense Secretary Jim Mattis appears to have found the limits of its military expansion in Yemen’s stalemate conflict, experts say. After it withdrew troops from the conflict, the satellite photos show it began shipping off equipment and tearing down even newly built structures.
“The Emiratis are paring back their strategic ambitions and are pulling out of places where they had presences,” said Ryan Bohl, an analyst at the Texas-based private intelligence firm Stratfor. “Having that hard-power deployment exposed them to more risk than the Emiratis are now willing to tolerate.”
Emirati officials did not respond to questions from the AP. Eritrea, which gave a 30-year lease to the Emiratis for the base, similarly did not respond to questions sent to its embassy in Washington.
The UAE, a federation of seven sheikhdoms home to Abu Dhabi and Dubai, poured millions of dollars into improving the facility at Assab, only some 70 kilometers (40 miles) from Yemen. It dredged a port and improved the dusty airstrip’s roughly 3,500-meter (11,500-foot) runway to allow for heavy support aircraft.
The Emiratis also built barracks, aircraft canopies and fencing across the 9-square-kilometer (3.5-square-mile) facility initially built in the 1930s by colonial power Italy
Over time, the UAE stationed Leclerc battle tanks, G6 self-propelled howitzers and BMP-3 amphibious fighting vehicles at the airport, according to United Nations experts. Those types of heavy weapons have been seen on Yemeni battlefields. Attack helicopters, drones and other aircraft have been seen on its runways.
Barracks on the base housed Emirati and Yemeni troops, as well as Sudanese forces filmed disembarking in Yemen’s port city of Aden. Records show the ship carrying them, the SWIFT-1, traveled back and forth to Assab. The vessel later came under attack by Houthi forces in 2016 and the Emirati government asserted it carried humanitarian aid, a claim for which U.N. experts later described themselves as being “unconvinced of its veracity.”
The base also aided wounded soldiers by housing “one of the best field surgical hospitals anywhere in the Middle East,” said Michael Knights, a fellow at the Washington Institute for Near-East Policy who has studied the Assab base.
As Yemen’s war dragged on, the Emiratis also used the base for holding prisoners as the Saudi-led coalition faced increasing international pressure over detainee abuse and airstrikes killing civilians. The UAE announced in the summer of 2019 it had begun withdrawing its troops from the war, which still rages today.
“There’s only so far that they can punch above their weight, which they do militarily and economically,” said Alex Almeida, a security analyst at Horizon Client Access who has studied Assab. “Once they figured out Yemen wasn’t worth it for them, they decided, ‘We’re going to end it,’ and they ended it pretty suddenly.”
Satellite pictures from Planet Labs Inc., analyzed by the AP, show that decision appears to extend to Assab as well.
In June 2019, around the time the Emiratis made their withdrawal announcement, workers apparently razed structures believed to be barracks alongside the port, the satellite images show. Workers gathered neat rows of materiel just north of the port, apparently waiting to be shipped off.

In early January of this year, another photo showed what appeared to be vehicles and other equipment being loaded onto a waiting cargo ship. By Feb. 5, the ship and that equipment were gone.

The deconstruction included newly built canopies along a new tarmac near the facilities’ runway as well. In the Feb. 5 images, another set of canopies that analysts earlier linked to the drones being flown out of the base had been dismantled as well. The UAE has used Chinese-made armed drones in the Yemen war to kill leaders among the Houthi rebels.
Destruction of the drone hangars come after rebels in Ethiopia’s Tigray region in November alleged that Emirati drones from Assab had been used against their positions. The UAE hasn’t commented on the allegation for which the rebels offered no evidence.

The U.N.-backed government in Libya also has alleged the UAE has flown weapons through Assab on its way there. U.N. experts have accused the UAE among other nations of funneling weapons into Libya amid its yearslong civil war.

Meanwhile, a Ukrainian-registered Antonov An-124 cargo plane flew several flights in late January back and forth to the Emirati city of Al Ain from Assab, according to flight data from FlightRadar24.com.

That aircraft, once linked to the Emirati military, now flies for an Ukrainian-Emirati company called Maximus Air. The firm did not return a request for comment left at its Abu Dhabi office.

Despite the dismantling work, Emirati attack helicopters still have been seen at the base. It remains a strategically important point as well, sitting just off the crucial Bab el-Mandeb strait connecting the Red Sea to the Gulf of Aden.
But the UAE may face more-pressing concerns. Since 2019, tensions between the U.S. and Iran have seen a series of escalating incidents, including attacks on ships off the Emirates. Those threats closer to home may take precedence over an expanded milittary footprint abroad…
“I think what ‘Little Sparta’ is doing is to keep its powder dry for whatever it needs to do next,” Knights said.
This article has been adapted from its original source
——————————————————————————————————————————————————————————