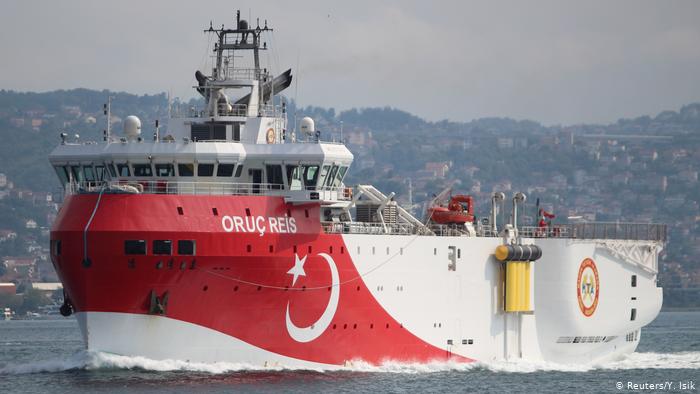 Greece welcomed the vessel’s departure, saying it would ease tensions over energy exploration rights in the eastern Mediterranean. Turkey has been threatened with EU sanctions for its exploration in the contested waters.

“The return of the Oruc Reis is a positive first step, I hope there will be continuity. We want to talk with Turkey but in a climate without provocations,” Greek Prime Minister Kyriakos Mitsotakis told reporters in Thessaloniki.

But Turkish Defense Minister Hulusi Akar played down the move, saying the ship had planned to return to Turkey as part of scheduled plans. He added that it did not mean that Turkey was “giving up” on jockeying for position in the East Mediterranean.

He added that movements away from contested waters, which are claimed by both Greece and Turkey, did not mean the country “would be giving up on our rights there.”

There are no agreed maritime borders between Turkey, Greece and Cyprus in the East Mediterranean.

Turkey has said it has a legitimate claim in the area that the Oruc Reis was in while it researched hydrocarbon reserves in the region. It was stationed near the Greek island of Kastellorizo since August 10 despite concerns from Greece and the European Union.

The discovery of the reserves has led to increased tensions in the region. Talks between the three nations have not provided a standard solution to the tensions.

NATO said earlier this month that both Turkish and Greek representatives have agreed to take part in technical talks to avoid accidents between their respective navies.

Greece denied these have happened, but Turkey’s defense ministry said Thursday that the first round of talks took place at NATO’s headquarters in Brussels.

Greek President Katerina Sakellaropoulou on Sunday visited Kastellorizo, which is near the disputed waters, and said there was mounting pressure on her country.

“We are going through a difficult and dangerous period,” said Sakellaropoulou. “The Turkish leadership…is undermining the peaceful coexistence that was built over many decades by Greeks and Turks, who saw the sea between them not as an impenetrable frontier but as a passage of communication.”

Leaders of seven European nations located on the Mediterranean said they were ready to back EU sanctions on Turkey. Any potential actions by the European bloc will be discussed at a European Council summit later this month.