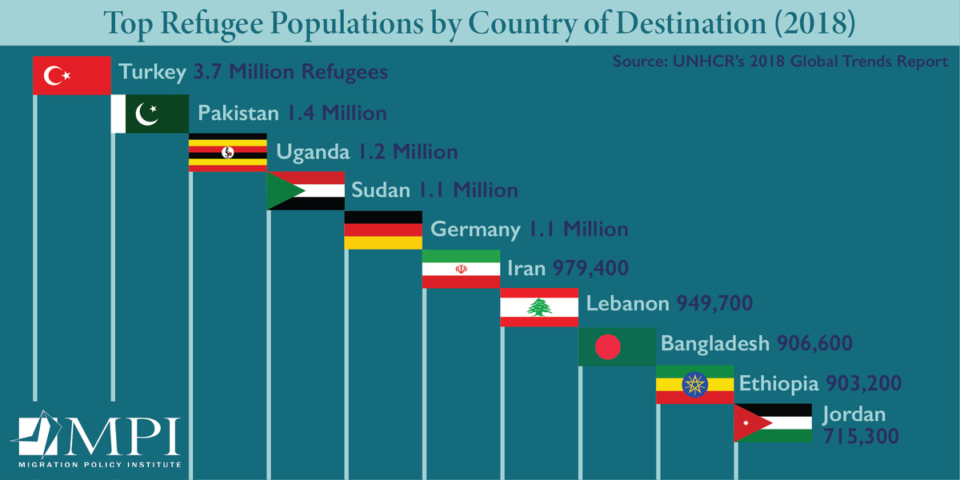 Turkey has for many years running been the single nation hosting the most refugees in the world. The number is hard to reckon, since a goodly number of Syrians and Afghans live there off the cards, but let’s say 4,000,000. Living in one of those X-marks-the-crossroads countries has forever made the Turks reasonably tolerant of incomers. Back in the day, peoples from all over the known world would make Constantinople top of the polyglot pops, and it’s still up there today as a gateway nation to Europe.

So the Syrian refugee crisis has almost reached the Biblical proportions of the 1947 Catastrophe in Palestine. It has surpassed in a single decade the 2,500,000 Afghan refugee population. And that is where the point lies: the 10 years. Syria has become, like in a pop-up book, the next Middle Eastern page. When opened, it turns into a weeping sore on the body politic of humanity itself, just like the complete khazis in Lebanon, Palestine, Iraq, and Yemen.

These conflicts grind on for years without resolution because the ethics-free zone that was the Cold War has morphed into the equally bad ethics-free zone that is the multi-polar, post-Cold War geopolitical scene. These days, without any restraint from the White House, Israel is practically off the leash, and leaders across the region (when not bombing neighbouring countries or brutally repressing their in-house pleas for justice) are investing heavily in the next-gen monitoring tech that they think might stave off those very same plebs.

We’re a long way from the heady days of Nobel-irony-prize-winning Sadat and Begin. If anyone knows what happened to the State Department’s positive-outcome scenario for the Middle East, please let us know on a postcard.

Originally welcoming to Syrians, in the long-lost days when people thought the war might be a short-run thing, Turkey has more recently kept its borders closed to Syrians, except at some crossing points where Ankara can monitor the intake more closely. The lives lost in the terrorist attacks in 2015 and 2016 served to harden Turkey’s stance: whether towards Kurds or Syrians.

Turkey is in a bind. Despite its ancient traditions of assimilation and co-existence (forgotten in the craziness of the Armenian genocide), Erdogan’s government has failed to fully commit to what it knows to be the truth: that its Syrian population, which grows by 350 a day through newborns, is there to stay. Ankara has gone some way to address the refugees’ needs, with legislation in 2013 and 2014 that regularized provision of health and education to its ‘guests’, but Syrians and other refugee populations including the Afghans do not yet have an easy route to desperately-needed work permits, a move that would signal a longer-term commitment that Ankara surely knows must be warranted. The last thing anyone needs, after all, is yet another enormous population of dispossessed refugees, forlorn of hope, betrayed by the international community.

Let’s face it. In the Middle East, quick fixes turn to desert dust before you can say ‘Oslo’.