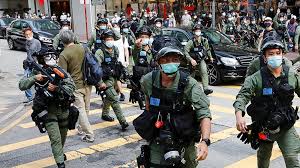 More than a decade ago, when I came from China to study at the Lee Kuan Yew School of Public Policy at the National University of Singapore, two political terminologies were deeply rooted in my mind. One was the fantastic “human rights,” and the other was the disgraceful “double standards.”

I still vividly remember my dean at the time, Kishore Mahbubani, an internationally renowned thinker and former president of the United Nations Security Council, repeatedly sharing his collected examples of the West’s double standards on human rights, including numerous cases in the Middle East, Asia, Latin American and Africa.

In his opinion, the reason behind such double standards was that the West will take a moral stand only when its fundamental interests are not affected. That has unfortunately been the hard truth.

Today, I would like to add some new cases involving my homeland China to Mahbubani’s long list. The latest one is about two cartoons.

Last month, China was asked by Australian Prime Minister Scott Morrison to apologize because of a digital illustration depicting a smiling Australian soldier holding a bloodstained knife to an Afghan child’s throat. Actually, the cartoon was artistically created by a Chinese computer-graphic artist based on an official report that Australian special forces unlawfully killed 39 civilians and prisoners in Afghanistan between 2009 to 2013.

Earlier this year, in January when China was suffering badly from the Covid-19 outbreak, a Danish newspaper published a satirical cartoon of the Chinese national flag with coronavirus-shaped symbols, but Danish Prime Minister Mette Frederiksen responded in defense that “we have freedom of expression in Denmark – also to draw.” In 2005, other cartoons by the same paper, of the Prophet Muhammad, offended many Muslims.

So Western artists are entitled to have such freedom to draw freely, but others cannot?

The second case is about demonstrations. In 2019, a series of riots broke out in China’s Hong Kong special administrative region, but the West turned a blind eye to the violent crimes committed by the rioters. Rather, the US passed the Hong Kong Human Rights and Democracy Act to support local separatists.

In comparison, although this year’s Black Lives Matter protests across the US were generally peaceful, President Donald Trump called those protesters “thugs.” Similarly, Western politicians and media applied a totally different standard to anti-racism protests in London and demonstrations in Barcelona in support of Catalonian independence.

The third case is about terrorism. On March 1, 2014, a group of Uighur separatists killed 31 innocent people and injured 143 inside China’s Kunming railway station. Shockingly, many Western media refused to identify the terrible event as a terrorist attack, while they frequently labeled minor attacks that happened within their own nations as terrorism.

While China’s experimental and innovative counterterrorism practices in Xinjiang have been criticized in the West as a means to oppress different opinions, some Western countries are in fact introducing similar measures. For instance, the French cabinet recently approved a bill “supporting republican principles” to tackle radical Islam. Anti-terrorism and de-radicalization are global challenges, but the West’s double standards on terrorism are damaging global efforts.

The West has applied double standards not only to China but also to many other non-Western countries. If the US still believes in “American exceptionalism,” how could we expect it to treat us equally based on a universal standard? Double standards represent the West’s hegemony and arrogance, while human rights and democracy have been hypocritically used as an excuse to sell the West’s own agenda and advance its own interests.

The West was long considered the beacon of human rights, but its deep-rooted and long-lasting ideology of double standards has continuously undermined its credibility. Instead of selectively preaching the belief that “everyone is equal,” it would be better for the West to apply one single but fair standard to itself and the rest of the world.

Sun Xi, a China-born alumnus of the Lee Kuan Yew School of Public Policy at the National University of Singapore, is an independent commentary writer based in Singapore.

Yemen is collapsing. That may be its salvation