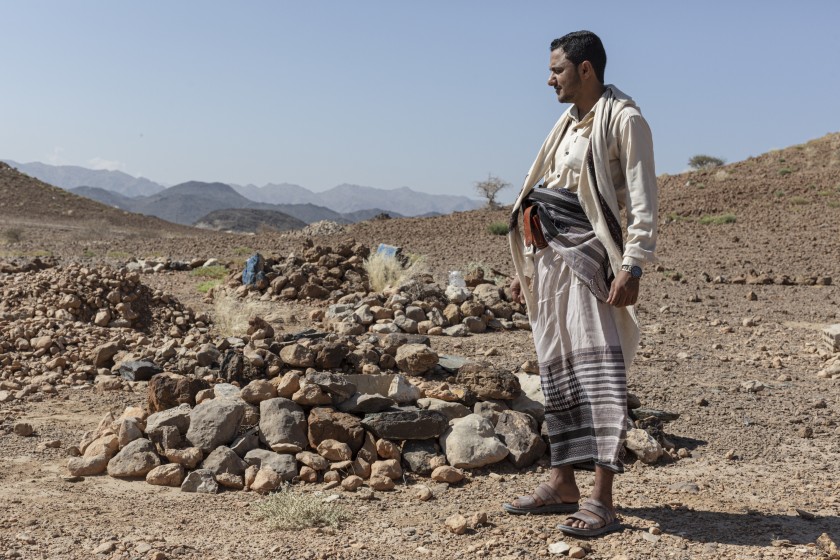 On the rare occasion Yemen shows up in the news, it’s a land of famine and war, home to the world’s worst humanitarian crisis.

So it was a surprise on a recent visit to coastal Shabwa province to find not only a white sandy beach that Instagrammers would drool over but a row of bungalows under construction to receive them.

The bungalows are part of a proposed resort named Shabwa Bride, which is under the personal supervision of the provincial governor, Mohammad Saleh Bin Adio. It’s one of many projects he points to as proof that, in the grim litany of Yemen’s disasters, Shabwa is an exception.

“We’ve tried to make of Shabwa a ray of hope, a model to be followed by the other provinces,” Bin Adio said in an interview.

Most elsewhere in Yemen, hope is in short supply. The country’s five-year-long civil war — which has drawn in outside actors such as Iran, Saudi Arabia, the United Arab Emirates and Al Qaeda — has killed at least 100,000 people, including 12,000 civilians, according to a 2019 report. A long-running blockade and a currency crash have paralyzed commerce and development. State rule is a largely notional concept.

But not so in Shabwa. Markets appear crowded, even if buyers seem few, in the oil-rich province — Yemen’s third-largest. Crews work to pave highways, and investment is trickling in. The only security forces on the streets are those loyal to the government. 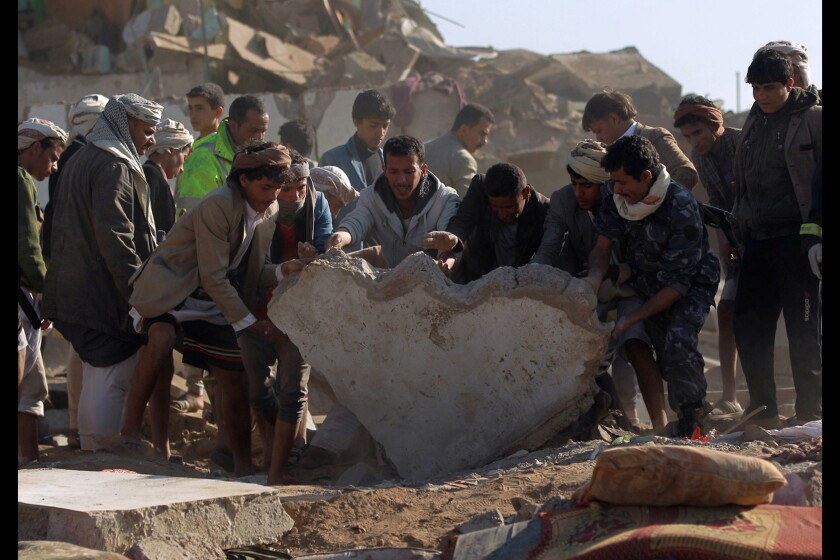 Wherever they are going, you’re sure to find something for the traveler in your life this holiday season with the TUMI Wanderlust Wish List.

“We can say it’s the first province in Yemen completely liberated of armed militias, which submits to the state and receives its directives from the president,” Bin Adio said.

Yet many credit Shabwa’s rise less to the presence of the Yemeni government than to its absence.

Without the central government vacuuming up all of Shabwa’s oil profits and tax revenues, local leaders for the first time have had both the motivation and the means to develop the province as they see fit, said Nadwa Dawsari, a Yemen conflict analyst at the Middle East Institute.

“The evolution of relatively successful governance in areas like Shabwa is not because of the vision of the central government or [President Abd Rabbu Mansour] Hadi,” Dawsari said. “It’s a byproduct of its collapse.”

Based in Saudi Arabia since 2015 out of concern for his safety, Hadi has had little say in the day-to-day running of his own country. His biggest impact on Yemen has arguably been his 2018 edict allocating 20% of Shabwa’s gas and oil sales to the local government. Although the ongoing war more than halved Shabwa’s production to 7,000 barrels per day, and despite this year’s fall in oil prices, Bin Adio has collected $35 million in revenue since his tenure as governor began in November 2018, and used the money to make the province function better than most other parts of the country.

That has made it a sanctuary both for Yemenis fleeing the war as well as migrants who use the country as a waystation to Saudi Arabia, swelling the province’s population from some 600,000 people to more than 1 million, by some estimates.

“We had to leave, and people told us to go to Shabwa,” Nada said. She moved with her brother to the provincial capital, Ataq, and was able to start a business selling baked goods for events to supplement the family’s income.

Businessmen, too, have gravitated here.

“Before, there was division, and this stopped investment. But now we have a safe environment,” said Saleh Khalifa, a 35-year-old contractor who has recently partnered with the local government on electricity and other infrastructure projects.

Shabwa’s stability has been hard-won. The province, which is roughly the size of Mississippi, extends from Yemen’s center to its southern coast; it’s a linchpin for whoever wishes to control the country’s southern regions. That has made it an important prize for all the warring sides.

After the Iran-backed Houthis took over Sanaa in late 2014, they marched toward Shabwa and other parts of the south, spurring the rise of a coalition led by Saudi Arabia and the UAE to stop them. But after the coalition stopped the Houthis’ advance more than two years later, it fractured. Secessionists in the port city of Aden — the interim capital — seeking to include Shabwa in a prospective state launched their own assault on the province, with the UAE’s blessing, in the summer of 2019.

They advanced enough to surround Bin Adio’s house in Ataq. But by the third week, the offensive ended with the Yemeni government in control, leaving UAE forces with some bases in the province, including the Balhaf gas export terminal, the largest foreign investment on Yemeni soil. (Emirati authorities refused to allow a group of visiting journalists, including from The Times, to visit Balhaf.)

In the aftermath, Bin Adio has become a regular target of pro-Emirati media, which accuse him of being a member of the Muslim Brotherhood, the UAE’s bete noir, as well as allowing Al Qaeda in the Arabian Peninsula to operate freely in Shabwa. Earlier this year, he survived an assassination attempt that he also blames on the UAE.

“The Emirates has conducted attacks with snipers, car bombs and others against me, because they have designs on the province and Yemen in general,” Bin Adio said. 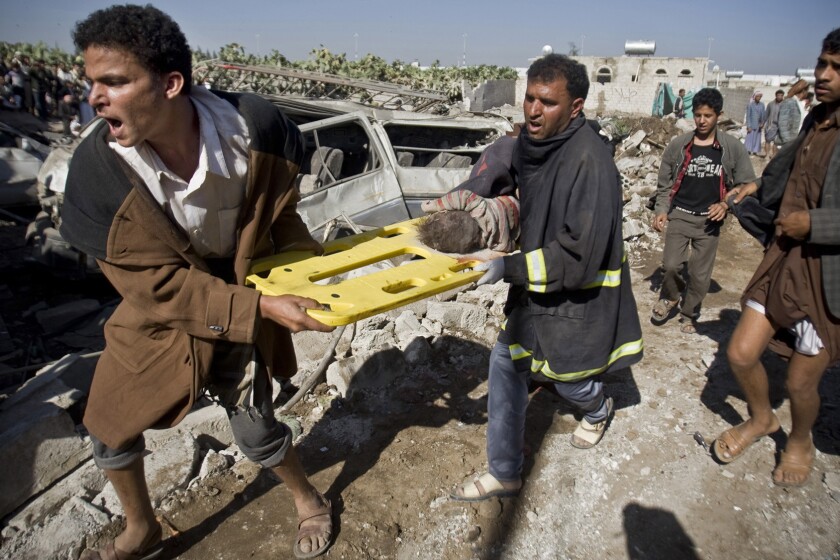 Despite those lingering tensions, security has so far held, though some accuse of Bin Adio of using heavy-handed tactics.

“We’re facing a dictatorship from this current government,” said Ahmad Haql, a human rights advocate with the Southern Transitional Council, the separatist group backed by the Emirates.

In an interview, Haql accused local authorities of making numerous arrests of local residents, including minors, on trumped-up charges. Haql’s colleagues also allege that Bin Adio has doled out contracts to his friends and embezzled public funds.

Bin Adio insists that the accusations are baseless and that his office has worked with hundreds of contractors. “We choose the contractor who is trustworthy and qualified. And I keep track of them every week,” he said.

The governor has garnered significant local support, including from Shabwa’s often fractious tribes. In a tribal conclave held during the visiting journalists’ stay, leaders expressed approval, even happiness, with his tenure.

“We have a governor doing things that make us understand what a state is,” said Sheikh Jarbou Nassi, adding that Bin Adio had reduced crime while equitably distributing developments projects. “He united the tribes behind him.”

“The central government is with whom? The power in Aden, in Sanaa — with whom is it at this point?” Hamami said. “What we see is that the equality comes in federalism, and that the central state won’t work.”

Baraa Shibani, a London-based Yemeni political researcher and activist, agrees that Shabwa could show the way forward for the nation as a whole.

“The country as it existed before 2015 is operationally no more. The only opportunity before Yemenis is to reformulate the country as a federal state,” Shibani said. “Shabwa is a model for what could be the solution for Yemen.”

Investors and workers see economic opportunities in tourism projects like the Shabwa Bride resort, which broke ground three months ago on a pristine strip of beach in the village of Bir Ali, at the southern tip of Shabwa. So far, more than two dozen beach chalets have been built, along with a restaurant and mosque, said Raed Sabri, a site engineer. After the first stage of construction is completed in three months, one-third of the facilities will be opened to the public.

“There is stability and security here … and this is a special location that showcases Shabwa and Yemen,” Sabri said.

Other, more quotidian development projects have also gone ahead, including the paving of hundreds of miles of highways — an accomplishment in a province where, before 2015, only 140 miles had been paved.

“People say Yemen is over,” said Aziz Bahri, a 38-year-old investor in hotels and other projects. “I say Shabwa is a lost gem which will save Yemen. We’re in a situation where the problem — the collapse — can be the solution.”