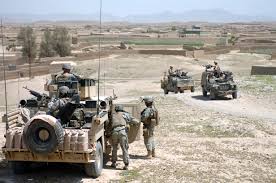 ndless conflicts in the Middle East have cost us dear, yet all we hear are absurdities about ‘keeping our streets safe from terror’

Why does no one mention the war? The most militaristic, belligerent and chauvinist country I know – and also love – is the US. People fly flags from every post and see “bad guys” under every bed. When the president, Donald Trump, vows to leave the Middle East he is condemned as a traitor even by his fans.

The second most belligerent is Britain, albeit less so. With America, it is continuing to fight the so-called “wars of 9/11”, 18 years after they began – battling in Afghanistan, Iraq and Syria, in Britain’s case covertly. There is not the remotest sign of “victory” in sight. Somehow they are not seen as wars, just the licensed killing of foreigners.

Most conflicts start macho and popular. The three most recent American presidents, George W Bush, Barack Obama and Donald Trump, were all hesitant about military intervention before taking office, and yet supported it in power. But the worm is turning. A recent Pew survey reveals that 62% of Americans feel in retrospect that the Afghan war was “not worth it”, 59% feel the same of Iraq and 58% agree in the case of Syria. This disillusionment is in each case two points even higher among military veterans. Soldiers don’t like wars they can’t win.

The last British survey of such opinion was back in 2015. YouGov revealed that support for Middle East intervention had collapsed from two-thirds to one-third since 2003. A similar fall, from 63% to 38%, was recorded by YouGov America. Yet in Britain’s current election, there is no suggestion from any politician – even Jeremy Corbyn – that British forces be withdrawn. It is as if democracy had grown numb to the costs and consequences of projecting violence overseas.

The US has spent a staggering $6.4tn on almost two decades of interventions, with more than 7,000 military dead. Britain has lost 634. In addition, unknowable thousands of civilians have died, and billions of pounds’ worth of property been destroyed. Christianity has been all but wiped out in the region, and some of the finest cities in the ancient world have been bombed flat. No audit has been made of this. The opportunity cost must be unthinkable. What diseases might have been eradicated, what climate crisis relieved?

British defeats in Basra and Helmand have been brushed under the carpet, as was David Cameron’s fiasco in 2011 in Libya

The wars of 9/11 must rank among the cruellest, most costly and senseless of the post-imperial age. Yet in Britain successive governments have parroted absurdities about “keeping our streets safe from terror”. The opposite is manifestly the case. The threat to London is said to be “substantial” and parts of Westminster look like a pastiche of Guantanamo Bay.

The assumption is that at least the public and the military establishment are “behind the troops”. That is clearly not the case. As long ago as 2004 Lord Bramall, who died this week and was once Thatcher’s favourite soldier, challenged the government to prove that the Iraq war, then just a year old, was worth the cost. It had, he said, already proved “erroneous and counter-productive” despite promises that it would bring democracy to Iraq. He added: “One can but wonder what legal – or, now, even moral – mandate the [western] coalition really has to do that.” Bramall was emphatic that he spoke for many in the military establishment opposed to Tony Blair’s mission, undertaken to please the Americans. In the 15 years since he made that speech nothing has changed.

Every maxim about wars being easier to start than end has been vindicated. British defeats in Basra and Helmand have been brushed under the carpet, as was David Cameron’s fiasco in 2011 in Libya. Yet a Commons vote in 2013 against joining the Americans in Syria was disregarded by Downing Street in favour of covert operations. Today British drone killings are continuing across the Middle East. In July there were even reports that Britain was being asked to replace the US forces in Syria withdrawn by Trump.

After a prolonged period of peace, the US and Britain face no existential threat from anyone. Yet they seem magnetised to distant military glory, in Britain’s case by the prospect of “punching above our weight”. Leaders assume a vague mandate for intervention, viewing war as patriotism in practice. Thatcher’s Falklands war was undeniably popular. But in Afghanistan and Iraq what began as punitive raids mutated into crypto-imperial missions, intended to convert the heathen to western democracy. When the heathen declined and order collapsed, they died in their thousands.

Precious few soldiers of my acquaintance believe there is any purchase in Britain staying in the Middle East. They just pray for a government with the guts to withdraw. None seems to have such guts. Thick is the glue that keeps western troops on alien soil. Staying is now an exercise in saving face, in not being seen to cut and run. Downing Street wants any chance to play on the global stage, to keep in with America for after Brexit. None of these objectives seems plausible. Nor are they popular. We are stuck with war, and no one can explain why

IMF surcharges for countries more heavily in debt to the IMF