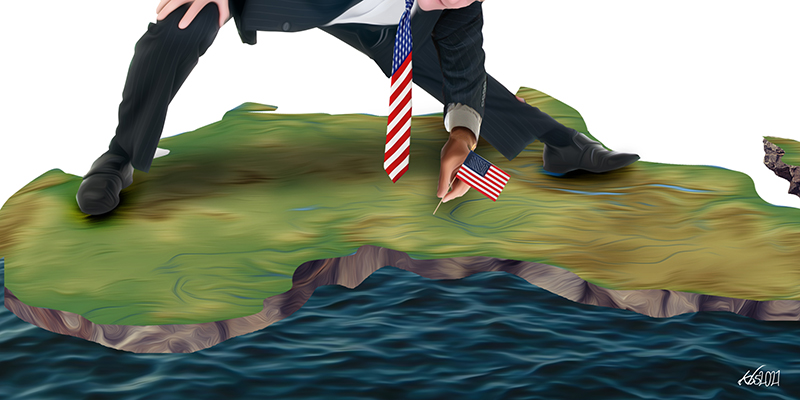 While Donald Trump’s administration completely neglected America-Africa relations, the blind spots bedeviling America’s Africa policy preceded his 2016 election. Correcting the systemic flaws of the past 30 years will require a complete rethink after the controversial President’s departure.

America’s post-Cold War Africa policy has had three distinct and discernible phases. The first phase was an expansionist outlook undergirded by humanitarian intervention. The second was nonintervention, a stance triggered by the experience of the first phase. The third is the use of “smart” military interventions using military allies.
The turning point for the first phase was in 1989 when a victorious America pursued an expansive foreign policy approach predicated on humanitarian intervention. Somalia became the first African test case of this policy when, in 1992, America sent almost 30,000 troops to support Operation Restore Hope’s humanitarian mission which took place against the background of the collapse of the Somalia government in 1991.
On 3-4 October 1993, during the Battle of Mogadishu, 18 US servicemen were killed in a fight with warlords who controlled Mogadishu then, and the bodies of the marines dragged through the streets of Mogadishu. The media coverage increased pressure on the politicians and six months later America withdrew from Somalia — a case of the New World Order meeting the harsh reality of civil conflict.
The chastening experience resulted in America scaling back its involvement in internal conflicts in far-flung places. The result was the emergence of the second phase — non-engagement when Rwanda’s Genocide erupted in 1994 and almost a million people died in 100 days revealed the limitations of over-correcting the Somalia experience. This “non-interference” phase lasted until the twin Nairobi and Dar es Salaam US embassy bombings by Al Qaeda in 1998.
This gave way to the third phase with the realisation that the new threat to America was no longer primarily from state actors, but from transnational non-state actors using failing states as safe havens. The 2002 National Security Strategy states: “the events of September 11, 2001, taught us that weak states . . . can pose as a great danger to our national interests as strong states.”

Counterterrorism training and equipping of African militaries is the central plank of this new security policy. As a result, counterterrorism funding has skyrocketed as has America’s military footprint in Africa. As a result, Africa has become the theatre in which the Global forever War on Terror is fought.

The reflexive reaction to the events of September 11 2001 spawned an interlocking web of covert and overt military and non-military operations. These efforts, initially deemed necessary and temporary, have since morphed into a self-sustaining system complete with agencies, institutions and a specialised lingo that pervades every realm of America’s engagement with Africa.

The United States Africa Command (Africom) is the vehicle of America’s engagement with the continent. Counterterrorism blurred the line between security, development, and humanitarian assistance with a host of implications including unrelenting militarisation which America’s policy establishment embraced uncritically as the sine qua non of America’s diplomacy, their obvious flaws notwithstanding. The securitisation of problems became self-fulfilling and self-sustaining.

The embrace of counterterrorism could not have come at a worse time for Africa’s efforts at democratization. In many African countries, political and military elites have now developed a predictable rule-based compact governing accession to po

“Smart” African leaders exploited the securitised approach in two main ways: closing the political space and criminalising dissent as “terrorism” and as a source of free money. In Ethiopia, Yonatan Tesfaye, a former spokesman of the Semayawi (Blue) Party, was detained in December 2015 on charges under Article 4 of Ethiopia’s Anti-Terrorism Proclamation ((EATP), arguably one of the the country’s most severe pieces of legislation. But Ethiopia has received millions of dollars from the United States.
The Department of Defense hardly says anything in public but gives out plenty of money without asking questions about human rights and good governance. Being a counterterrorism hub has become insurance policy against any form of criticism regardless of state malfeasance.
Egypt is one such hub. According to the Congressional Research Service, for the 2021 financial year, the Trump Administration has requested a total of US$1.4 billion in bilateral assistance for Egypt, which Congress approved in 2018 and 2019. Nearly all US funding for Egypt comes from the Foreign Military Finance (FMF) account and is in turn used to purchase military equipment of US origin, spare parts, training, and maintenance from US firms.
Another country that is a counterterrorism hub in the Horn of Africa is Ethiopia. For the few months they were in charge, the Union of Islamic Courts (ICU) brought order and stability to the country. Although they were linked to only a few of Mogadishu’s local courts, on 24 December 2006, Ethiopia’s military intervened in Somalia to contain the rise of Al Shabaab’s political and military influence.
The ouster of the ICU by Ethiopia aggravated the deep historical enmity between Somalia and Ethiopia, something Al Shabaab — initially the youth wing of the ICU — subsequently exploited through a mix of Somali nationalism, Islamist ideology, and Western anti-imperialism. Al Shabaab presented themselves as the vanguard against Ethiopia and other external aggressors, providing the group with an opportunity to translate their rhetoric into action.
Ethiopia’s intervention in Somalia could not have taken place without America’s blessing. The intervention took place three weeks after General John Abizaid, the commander of US forces from the Middle East to Afghanistan, met with the then Ethiopian Prime Minister Meles Zenawi. The intervention generated a vicious self-sustaining loop. Ethiopians are in Somalia because of Al Shabaab, and Al Shabaab says they will continue fighting as long as foreign troops are inside Somalia. America has rewarded Ethiopia handsomely for its role as the Horn of Africa’s policeman. In both Ethiopia’s and Egypt’s case, on the score of human rights and good governance, the net losers are the citizens.

In keeping with the War on Terror being for forever, and despite departing Somalia in 1993, America outsourced a massive chunk of the fight against Al Shabaab to Ethiopia primarily, and later, to AMISOM. America is still engaged in Somalia where it has approximately 800 troops, including special forces that help train Somalia’s army to fight against Al Shabaab.
America carried out its first drone strike in Somalia in 2011 during President Barack Obama’s tenure. Under the Trump administration, however, the US has dramatically increased the frequency of drone attacks and loosened the oversight required to approve strike targets in Somalia. In March 2017, President Trump secretly designated parts of Somalia “areas of active hostilities”, meaning that the high-level inter-agency vetting of proposed strikes and the need to demonstrate with near certainty that civilians would not be injured or killed no longer applied. Last year, the US acknowledged conducting 63 airstrikes in the country, and in late August last year, the US admitted that it had carried out 46 strikes in 2020.
A lack of transparency regarding civilian casualties and the absence of empirical evidence that the strikes lead to a reduction in terrorism in Somalia suggest that expanding to Kenya would be ill-advised. The US has only acknowledged having caused civilian casualties in Somalia three times. Between 2016 and 2019, AFRICOM failed to conduct a single interview with civilian witnesses of its airstrikes in Somalia.
Despite this level of engagement, defeating Al Shabaab remains a remote possibility.

The Trump Administration did not have an Africa policy. The closest approximation of a policy during Trump’s tenure was stated in a speech delivered by John Bolton at a Conservative think tank decrying China’s nefarious activities in Africa. Even with a policy, where the counterterrorism framework views Africa as a problem to be solved by military means, the containing China policy views African countries as lacking the agency to act in their own interests. The problem with this argument is that it is patronising; Africans cannot decide what is right for them.
Over the last decades, while America was busy creating the interlocking counterterrorism infrastructure in Africa, China was building large-scale infrastructure across the continent. Where America sees Africa as a problem to be solved, China sees Africa as an opportunity to be seized.
Almost two years into the Trump administration, there were no US ambassadors deployed in 20 of Africa’s 54 countries even while America was maintaining a network of 29 military bases. By comparison China, has 50 embassies spread across Africa.
Some of the legacy Chinese investments have come at a steep environmental price and with an unsustainable debt. Kenya’s Standard Gauge Railway is bleeding money and is economically unviable.

Supporting democratic governance and learning to cooperate with China are two areas that will make America part of Africa’s future rather than its past.
America should pivot way from making the military the most visible face of its engagement with Africa and instead invest in deepening democracy as a principled approach rather than a convenient choice.
Despite the elegy about its retreat in Africa, democracy enjoys tremendous support. According to an Afro barometer poll, almost 70 per cent of Africans say democracy is their preferred form of government. Large majorities also reject alternative authoritarian regimes such as presidential dictatorships, military rule, and one-party governments. Democracy, while still fledgling, remains a positive trend; since 2015, there have been 34 peaceful transfers of power.
However, such positive metrics go hand in hand with a worrying inclination by presidents to change constitutions to extend their terms in office. Since 2015, leaders of 13 countries have evaded or overseen the weakening of term limit restrictions that had been in place. Democracy might be less sexy, but ignoring it is perilous. There are no apps or switches to flip to arrest this slide. It requires hard work that America is well equipped to support but has chosen not to in a range of countries in recent years There is a difference between interfering in the internal affairs of a country and complete abdication or (in some cases) supporting leaders who engage in activities that are inimical to deepening democracy.
The damage wrought by the Trump presidency and neo-liberal counterterrorism policies will take time to undo, but symbolic efforts can go a long way to bridging the gap.
America must also contend with China being an indispensable player in Africa and learn to cooperate rather than compete in order to achieve optimal outcomes.
China has 2,458 military and police personnel serving in eight missions around the globe, far more than the combined contribution of personnel by the other four permanent members of the UN Security Council, Russia, the US, France and Britain. China had more than 2,400 Chinese troops take part in seven UN peacekeeping missions across the continent — most notably in Mali and South Sudan. Of the 14 current UN peacekeeping missions, seven are in Africa, consuming two-thirds of the budget.
Climate change and conflict resolution provide opportunities for cooperation. Disproportionate reliance on rain-fed agriculture and low adaptation to the adverse impact of climate change make Africa vulnerable to the damaging effects of climate change, the consequences of which will transcend Africa. Through a combination of research, development, technological transfer and multilateral investment, America and China could stave off the impact of climate change in Africa.