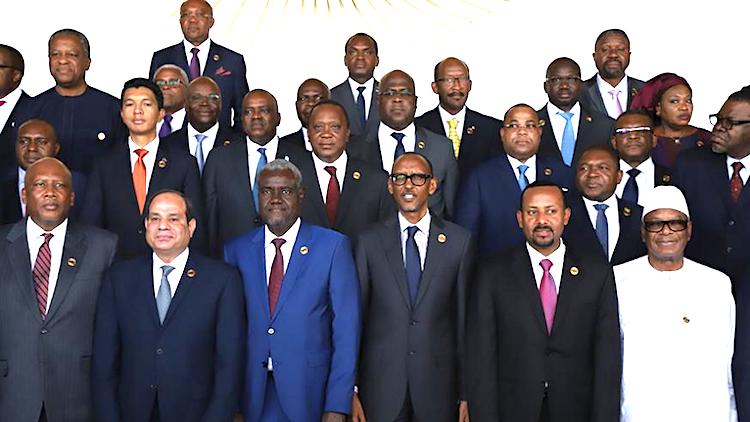 The African Union’s ambitions for a fully integrated and cooperating continent is frustrated by the implementation gap on agreements made by member states. Regional incentives and power dynamics must be addressed to realise Africa’s role as a future global powerhouse, but the roll-out of the continent-wide free trade area and the pandemic response show reasons for optimism.

What the AU has been able to achieve since its formation in terms of African regional integration is inspiring, though it continues to struggle when it comes to coordination and coherence. This is especially the case when the member states and Regional Economic Communities (RECs) attempt to reconcile divergent interests towards achieving Agenda 2063’s ambition of the continent becoming a global, inclusive and sustainable powerhouse. It highlights a pivotal struggle: how to compel member states to stick to, and implement, the AU’s decisions, resolutions and positions. In principle, member states have agreed to their implementation by signing the Constitutive Act of the African Union, which has various Articles underscoring the need to accelerate the process of workings towards Africa’s development and integration agenda.

As a secretariat, the AU Commission (AUC) struggles with enhancing its transparency and accountability mechanisms to build trust among member states and African citizens. Such a gap between aims and practice creates a vicious circle: why implement agreements when the sense of ownership is limited and priorities lie elsewhere?

In this context, in July 2016, the highest authority of the AU, the Assembly of Heads of State and Government, entrusted President Paul Kagame of Rwanda to conduct a study into institutional reform of AU processes, intended to guide proposed reforms. The outcome was to put in place a system of governance capable of addressing the challenges the AU faces. Six months later, the Assembly adopted the findings – referred to as the Kagame Report – and its recommendations, which led to the AU institutional reforms we have seen rolled out over the past four years: 1) a focus on key priorities with continental scope 2) realigning AU institutions to deliver against those priorities 3) delivering efficient management at both political and operational levels and 4) financing the AU by the member states sustainably.

‘A crisis of implementation’

The AU institutional reforms entail various complex processes at the national and regional level that may hinder collective action. While representing and coordinating the AU’s 55 member countries with a population of 1.3 billion is no easy task, the overriding challenge is to ensure member states see through policy decisions rather than merely formulating and adopting them into their jurisdictions.

Implementation of the reform agenda is a crucial example. Since adoption in July 2016 of the historic Kigali Decision on Financing the Union, which included a 0.2% levy to ensure that all member states pay yearly contributions to the AU fully and on time, by 16 June 2020 there were only 17 countries, representing about 31% of AU membership, that were at various stages of domesticating the agreement. The result is an AU still struggling to implement sustainable financing for its programmes and reduce over reliance on development partners.

Still, the amounts remitted by these countries represent below 10% of the amount expected as a contribution to both the AU’s regular Budget and Peace Fund. The AU still has arrears of over US$25 million.

In the words of the Kagame Report itself, produced under the leadership of a pan-African advisory team: ‘the chronic failure to see through African Union decisions has resulted in a crisis of implementation.’

Reasons for limited implementation relate to political, technical, legal and regulatory challenges once recommendations have been adopted by member states. These challenges include: selecting the goods eligible for a 0.2% levy, selecting the appropriate financial institution or customs authority responsible for its assessment and collection and legal implications under obligations to the World Trade Organization (WTO). The AU has no enforcement mechanism in place to ensure that the money collected is transmitted. However, political challenges reign supreme. For example, some member states and RECs indicated limited inclusivity in the consultation process and raised questions about the binding character of the Kigali Financing Decision on Financing the Union.

[B]e careful not to mistake hope for achievement. … And let us not imagine that, once proclaimed, our Union will become a reality without further effort

Similar political challenges have played out when it comes to the adoption of many Common African positions – points of interest agreed by member states – found primarily through the AU. These include recent campaigns for an African to hold a prominent office in multilateral positions like the United Nations Security Council and the WTO, highlighting the need to create better African decision-making structures. Full ownership from the member states is still lacking, leading to Africa’s slow collective action on pressing continental and global issues. Nevertheless, when common positions are found, they still can fail to guide country positions.

Currently, the AU faces a multitude of political and socio-economic challenges. These include peace and security, gender equality, political instability, governance, youth inclusion, migration and climate change, among others. Further, the COVID-19 pandemic threatens to drastically reverse any advancements made towards finding solutions to these challenges.

This raises questions about the potential role and power of the AU in delivering on results for the continent and its people, and in addressing the impacts of the current health crisis. The AU’s ability to succeed on many continental ‘flagship projects’ will remain a challenge, due to the selective application of collective political backing and lacking joint efforts of AU member states, and limited participation and understanding of the AU’s role and importance, according to its own mission statement, from African citizens and other actors.

It is not all gloom and doom

By most accounts, the AU is responsible for fuelling the rising spirit of pan-Africanism and growing continental integration we see in Africa today. In preparation for the commencement of trade under the African Continental Free Trade Area (AfCFTA) agreement in January 2021, responsibility for its implementation has been handed to an AU secretariat in Ghana, formally held in Addis Ababa in Ethiopia. The transfer of oversight of the trade agreement has shown an ability for continental and regional cooperation.

The AfCFTA, one of the AU’s core flagship projects, will cover a market of 1.2 billion people and a gross domestic product (GDP) of $2.5 trillion, across all 55 member states of the AU. The AfCFTA is even more critical given the impacts of the pandemic to enhance intra-Africa trade, accelerate Africa’s industrialisation process and create economic opportunities in Africa’s post-pandemic resilience and recovery.

Further, during these times of uncertainty, the AU, with technical legitimacy through the Africa Centre for Disease Control and Prevention (CDC), has played a significant role in addressing the pandemic’s impacts. Support was especially important in surveillance, emergency preparedness and response; providing continental assistance and joint funding for the member states; and convening and presenting a joint appeal to the international community for global solidarity and external support.

Dig even deeper to understand the AU

So yes, we must not mistake hope for achievement. Furthermore, the AU is far from perfect. However, through a political economy analysis of the challenge of reform implementation, one can begin to understand the actors and factors that shape how the AU plays its role in promoting Africa’s regional integration and cooperation. By looking at the institutions, incentives and power dynamics at play between the AU and the multitude of actors around it, we can better work towards the full implementation of African-led policies to transform the continent into the global powerhouse of the future.