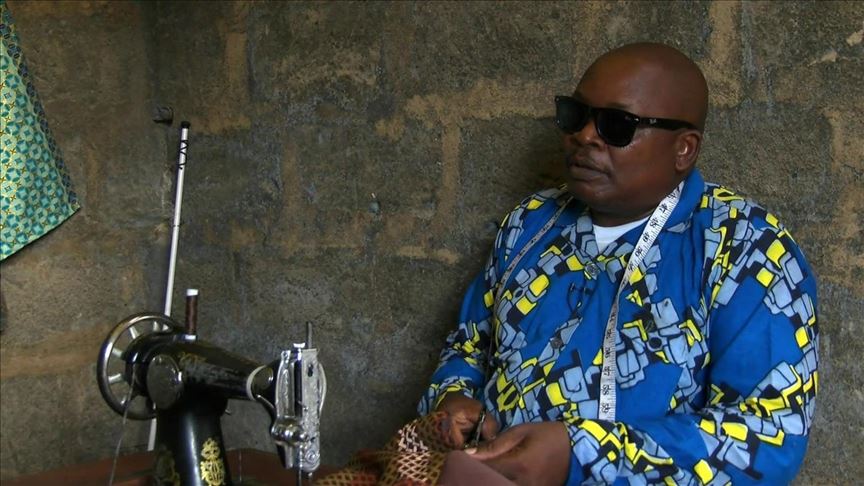 Despite being blind, Nyangalio uses remarkable memory and sense of touch to stich and drape clothes

When Abdallah Nyangalio, 61, lost eyesight, three decades ago, the world became dark and crushing. But instead despairing and losing his dreams, his zeal to overcome the visual disability has made him a master tailor.

His shop at the sprawling Mbagala neighborhood, south of Tanzania’s largest city of Dar es Salam is a favorite place for politicians including two former presidents and several famous people to drape and stitch their clothes.

Nyangalio, who lost eyesight at the age of 30, said his disability has never affected his desire to master the craft and support his family.

When his eyesight was gone, he realized a sharp increase in the ability of other sense. Using his enviable memory and sense of touch, Nyangalio began the journey of mastering the art of tailoring.

“People think, when you lose sight it is the end of everything, I find this idea wild and laughable,” he told the Anadolu Agency.

Devoting most of his time sitting before a sewing machine at this tailoring mart, his sharp memory and sense of touch to even feel colors wonders not only his customers, but onlookers as well.

Wearing dark sunglasses, his draping skills, recognizing bright color clothes while using scissors with the sense of touch is a statement of his determination.

Nyangalio recalls that in the beginning, he encountered a whole lot of problems. But soon he overcome challenges.

With scissor in his right hand, he gently loops his left hand over the top of the scissors and place the cloth between the two blades, and start cutting with the precision of a surgeon.

“I can easily cut and trim on the cutting lines with speed and efficiency,” he said

Nyangalio, who is married and shoulders the responsibility of four children, uses a needle threader attached to a fine wire for looping needle with a thread.

“The trick is simple, I put a fold on a thread and loop it using a threader. With my sharp sense of touch, I always ensure the wire loop is in the eye of the needle before the thread passes through and I cut the fold,” he said.

Nyangalio said there are three major principles in tailoring for a visually challenged person.

“You have to listen and know the sound of your sewing machine. When it rolls and has a thread inserted it sounds different from when it does not have it. You need to pay close attention to understand these two different sounds” he said.

Nyangalio said he uses, a traditional tape measure that he has customized with special braille marks for taking measurements.

Driven by his passion for entrepreneurship despite losing eyesight, Nyangalio said he was assisted by a Russian doctor, who taught him sewing technique.

Within few months he gained the skills and started to sew clothes by himself.

While he has attained mastery now, the work was not without challenges. He had repeatedly slit his palm with scissors and also many times pricked his hands with sewing machine’s sharp needle.

Nyangalio, who previously worked as a street hawker before losing his sight has devised an ingenious method of measuring sizes of his customers.

Guided by his instinct, he can simply touch the palm of a person and figure out waist and length sizes.

“I tell my customers to pick colors of thread they would like me to use,” he said.

Over the years Nyangalio has perfected his craft and he is known for sewing clothes for high profile people including Jakaya Kikwete and Ali Hassan Mwinyi, former presidents and also several legislators.

Nyangalio said his disability is irrelevant since it does not hinder his work and living.

The incredible sense of touch makes him recognize the garment, its texture, fabric and embellishment.

“At first I did not have the threader, so I was using a sharpened broomstick for looping the thread,” he said.

Relying on his sharp memory, he knows exactly, where he has put particular cloth of a customer.

“I do not expect to quit this job but I would love to get help to buy two more sewing machine so that I can impart skills to other people with disability. I am the only blind tailor in Tanzania.

More than 1.1 million Tanzania are visually impaired. Health workers believe that 70% of cases remain visual impaired just because of lack of access to health services.