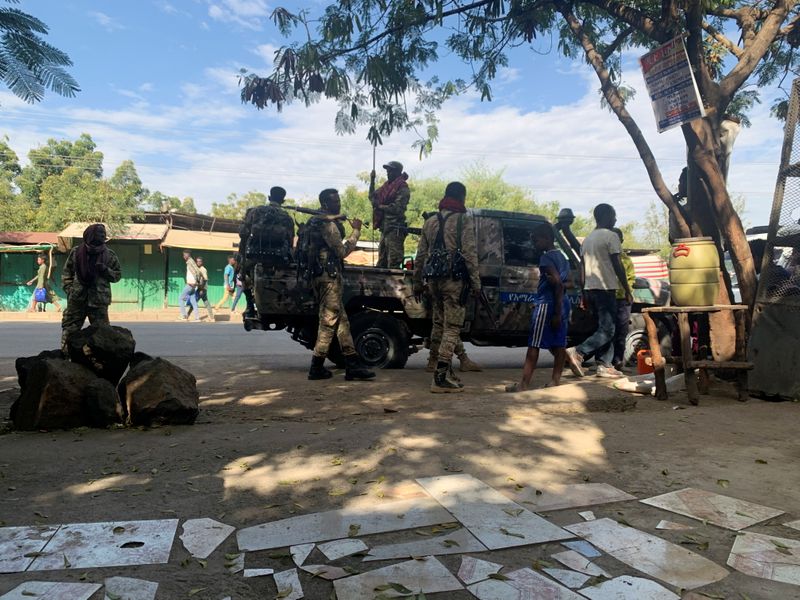 ADDIS ABABA (Reuters) – Ethiopian forces pushed towards the capital of the rebel Tigray region on Wednesday, ignoring international appeals for talks to end the conflict and denying it was targeting any ethnic group.

Federal troops are locked in a two-week conflict against Tigray’s forces, which has killed hundreds on both sides, rocked the Horn of Africa, stirred ethnic frictions elsewhere in Ethiopia and sent 30,000 refugees fleeing into Sudan.

Prime Minister Abiy Ahmed has billed the offensive as a campaign to restore rule of law in the northern state of more than 5 million people, saying victory would come in days.

He launched the offensive on Nov. 4 after accusing Tigrayan forces of an attack on a government base in the region.

“The federal government… denounces, in the strongest of terms, mischaracterization that this operation has an ethnic or other bias,” its task force on the crisis said in a statement on Wednesday.

Aiby, 44, is from the largest ethnic group the Oromo and is both a former military comrade of the Tigrayans. He also served in government with them until he took office in 2018.

With access restricted to the mountainous region and most communications down, Reuters could not independently verify assertions made by all sides.

Tigrayans represent about 5% of Africa’s second most populous country. Their ethnic group dominated political leadership between 1991 and 2018.

On Tuesday, the government accused rebel forces of destroying bridges connecting the regional capital Mekelle with the rest of the country in attempts to hold back federal troops.

Forces loyal to Tigray’s ruling party, the Tigray People’s Liberation Front (TPLF), also destroyed the section of a main road eastwards to Mekelle between the towns of Shire and Axum. Shire was under federal control, the task force said.

Debretsion Gebremichael, elected Tigrayan president in polls that Ethiopia does not recognise, told Reuters in a text message that his forces had fallen back but denied they destroyed bridges.

“We have shifted our defence line and as a result they get into some towns of South Tigray,” he wrote.

“No bridge is blown.”

On Tuesday, Abiy warned that a three-day deadline for Tigrayan troops to surrender had expired, paving the way for a military push against Mekelle. The war has killed hundreds of people – possibly thousands – and exacerbated suffering in a region where many already depended on food aid.