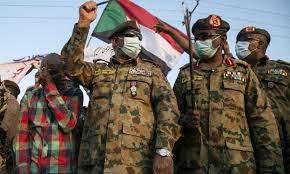 Relations between Sudan and Ethiopia are the most reliable and exemplary in East Africa. Although the two countries have a history of political differences on boundary, they have never considered war as an option. During the 17-year civil war in Ethiopia, Sudan and Ethiopian governments stood in opposition against each other. Despite repeated complaints about the border issue, they had never tried to solve the problem in war. Besides, both have focused mainly on their internal issues which related to the frequent ethnic conflictin Ethiopia and the recent political crisis in Sudan. Also, Ethiopia, Egypt, and Sudan have been embroiled in several diplomatic disputes over the Nile causeway, but Sudan’s humble position was a good neighborly symbol, not hostility. During Ethiopia’s law enforcement campaign in the Tigray region, Sudan began tightening its military presence along the border. More recently, however, Sudanese forces have taken control of several areas. It is undeniable that the war in Tigray has weakened Ethiopia’s control over the border. However, after all, why did Sudan suddenly become embroiled in a border dispute with Ethiopia? Why did the border dispute in Sudan suddenly trigger a military conflict?

The border between Ethiopia and Sudan was about 1,600 km long before South Sudan becameindependent. Due to its desire to control the Nile Basin and Egypt, The British government was keen to reach an agreement with Ethiopia on all matters of concern as Ethiopia’s power was growing in the region. In particular, the British government was enforced to negotiate a border agreement due toconcern about the Ethiopian empire’s expansion.

Even after centuries of agreement between Ethiopia and Britain, the border between South Sudan and Ethiopia remained in place after South Sudan Independence. If the treaty remains with the case, then what is the disputed border between Sudan and Ethiopia? A recent report in The National indicated that the Al-Fashaga area was a Sudanese province, although it was inhabited by Ethiopians. However, there is no statement from Ethiopian side to this issue. As the area is inhabited by many Ethiopians, diplomatic approach was not clear to the public so as not to lead to conflict. The Ethiopian government has not commented on Sudan’s repeated border complain for long time.Nevertheless, on the Sudanese side, sources indicate that talks were held in Al-Fashaga and other areas with Ethiopia and that a negotiated settlement was underway.

Thus, the border case is not sudden. The case has been stagnant and remains diplomatic. However, the fertility of the region has been the subject of repeated clashes between the farmers of the two countries. The border dispute between the two countries is long overdue and there is no reason to resort to violence. In fact, a sudden Sudanese military occupation causes many problems. The urge did not consider regional peace, bilateral agreement, national sovereignty and even the political transition in Sudan. Given these issues into consideration, Sudan will not choose military force as an option unless a third party is evolved on escalating the tension. Sudan will not opt to use the military with no tangible background after all this time. There are several reasons for this.

The GERD and the view of Sudan

Sudan was moderate, even around the Ethiopian Renaissance Dam. Sudan had been reflecting the construction of the dam would reduce the risk of flooding in Sudan and the use of electricity was widely considered. However, coincidentally, the assassination attempts on prime minister right after Sudan had rejected the Arab League statement on the Ethiopian Renaissance Dam, changed many things. Following the assassination attempt, Sudan’s diplomatic mentality was focused not only on protecting national interest but also minimizing further risks.

Diplomatic tensions between Ethiopia, Sudan, and Egypt following the construction of the Renaissance Dam could have covered Sudan’s claim. Since the issue of Ethiopia and Sudan is not just a Nile issue rather than Egypt, Sudan would have had the opportunity to raise further agendas and enter into a conflict with Ethiopia based on disagreements in the negotiations. However, the Sudanese people and government differed on this line. The desire to use the diplomatic differences around the Renaissance Dam for other political purposes has not been observed.

Sudan had been embroiled in a political crisis since the uprising against its former leaders. The uprising has had a profound effect on Sudan’s political, social, and economic values. However, the support of the Ethiopian government in support of political unforgettable. The Sudanese government is well aware of this, and it is unlikely to have a military confrontation with Ethiopia  following this recent incident

Ethiopia has worked hard on the establishment of a civilian-military coalition in Sudan.the position of the Ethiopian government can be seen as a symbol of good neighborliness and historical friendship. Holding that fact, Sudan should not have shown interest in war unless she was compelled by circumstances after Ethiopia’s remarkable effort in Sudan’s transition to peace and democratization.

How far is third party status

The Ethiopian government’s recent law enforcement campaign in the Tigray region has had an impact on the region. The war between the federal government and the Tigray region was widely reported to have weakened Ethiopia’s military capabilities. It has been widely reported as if Sudan wanted to take advantage of this gap. Indeed, the war in Tigray has played its part in weakening border control. However, the conflict in Tigray alone is not enough to justify the Sudanese campaign, as border control has already been compromised in various ways.

This why the idea is widely referred to as a third party. The Ethiopian government has repeatedly called for a third party to escalate the conflict. It has been said, the main target is to shift the government’s focus on maintaining peace and delaying the construction of the Renaissance Dam. The government also stated this through the invasion of Sudan.

There are also many hypotheses about Sudan-third party relations. Of course, Sudan has traveled to many countries in search of support for the border issue. That is why the Sudanese military’s emergency operation is linked to a third party.

At the same time, political difference in Sudan is overtly observed. As the Sudanese government is a combination of military and civilian, and the civilian wing does not want any conflict with neighboring countries at a time when Sudan is in a political and economic transition. Not only does it mean how effective a non-consensual military campaign in the country can be, but it also seems likely that the consequences of such a decision will affect the country’s politics.

Emphasizing that these issues are not a matter of Sudan being unprepared for a war with Ethiopia and a national agreement being reached, if Sudan wanted to wage war on the border with Ethiopia, she could have taken many opportunities earlier. But her previous approach had positive aspects for the country’s political transition, its relations with its neighbors, and regional peace. The hasty design of a sudden stimulus of military force for political change will not benefit a third party but costs both countries. This fact must be taken into account by the Sudanese military. It is still not too late for diplomatic effort.

*Chen Xi PhD, lecturer in the School of International and Public Affairs of Jilin UniversityThis article has been adapted from its original source.