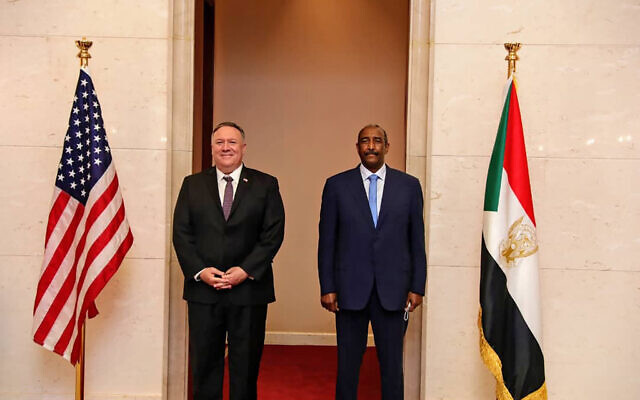 In talks with US officials, Khartoum asks for $3-4 billion in assistance as part of normalization package, New York Times reports

Sudanese officials reportedly requested $3 billion to $4 billion in aid in exchange for normalizing relations with Israel during negotiations with US officials.

Sudan’s Lt. Gen. Abdel Fattah al-Burhan, its de-facto leader, held talks this week in the United Arab Emirates with US and Emirati officials.

During the talks, Sudan turned down an offer of $800 million in aid and investments as part of an exchange for a deal with Israel, The New York Times reported on Sunday. Most of the sum would have been paid by the US and UAE, with Israel paying around $10 million.

Sudan has also asked to be removed from the US list of state sponsors of terror, which US officials said they are willing to do. The designation prevents Sudan from receiving foreign funding, contributing to its ongoing financial crisis.

Sudan is now seen by US officials as the most likely candidate to follow the lead of the UAE and Bahrain, which normalized ties with Jerusalem earlier this month, but the financial aid package has emerged as a stumbling block in the talks, the report said.

The Walla news site previously reported that Sudan was asking for oil and wheat shipments worth $1.2 billion to cope with recent devastating floods, a $2 billion grant to deal with Sudan’s economic crisis and a commitment of economic support from the US and the UAE over the next three years.

Israeli officials have long expressed a wish for better relations with Khartoum, citing its importance in the region as well as its geographic location.

Israeli officials said that Saudi Arabia took part in negotiations between Israel, the UAE and Bahrain, but that the Saudis were unlikely to recognize Israel in the near future. Saudi Arabia’s Crown Prince Mohammed bin Salman was involved in the talks, and the kingdom secretly pushed other Middle East countries to support the agreements, The New York Times report said.

Sudanese Prime Minister Abdalla Hamdok on Saturday rejected conditioning normalizing ties with Israel on its removal from the terrorism blacklist.

Hamdok said at a conference in Khartoum that he had stressed this point to US Secretary of State Mike Pompeo during a visit to Sudan last month.

The US-Sudanese negotiations in the UAE earlier this week ended Wednesday without a breakthrough, Axios reported.

Al-Burhan, told the site talks were “useful and constructive,” but did not give estimates as to what could be expected going forward.

Hamdok previously said that he is unable to currently normalize ties with Israel, noting that the country’s government is a transitional one. The transition period is slated to end in 2022.

The nation was the birthplace of the Arab League’s 1967 policy refusing negotiations or normalization with Israel, but in recent years it has seemingly softened its stance, moving out of Iran’s sphere of influence as it has desperately sought the removal of US sanctions as a supporter of Hamas, Hezbollah and other terror groups.

The foreign ministers of the UAE and Bahrain signed the so-called Abraham Accords in a White House ceremony with Prime Minister Benjamin Netanyahu on September 15. The only Arab states Israel previously had official ties with were Egypt and Jordan.

Sudan has been technically at war with Israel for decades.

Hamdok heads the transitional government, which came to power a year ago after Islamist president Omar al-Bashir was ousted, bringing together old rivals into a fragile coalition.

Removing Sudan from the US blacklist is a priority for the government, but while some leaders are in favor of a political deal with Israel, many oppose it. Any deal with Israel potentially risks undermining Sudan’s fragile political unity.

Sudan has been on the US blacklist since 1993 because of Bashir’s support for jihadists, including Osama bin Laden, who lived in the country for years in the 1990s before heading to Afghanistan.

British training of Saudi pilots continues amid bombing of Yemen