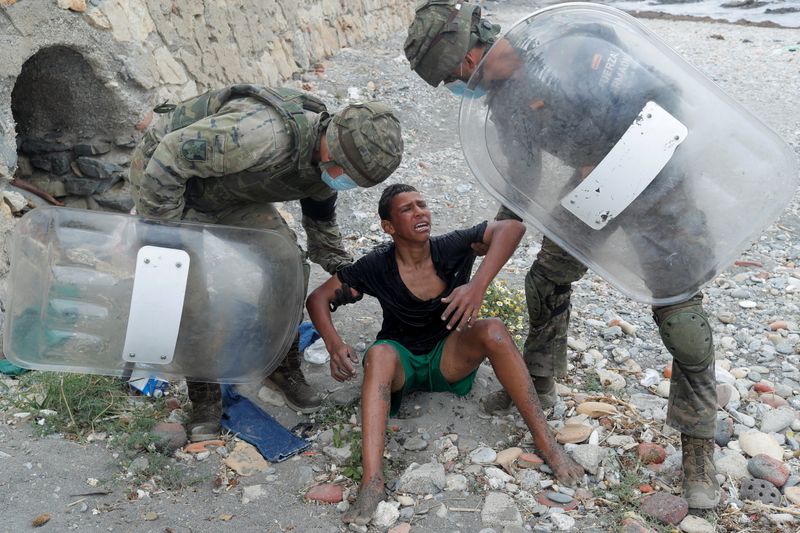 May 20, 2021
Thousands of migrants cross the Spanish-Moroccan border at El Tarajal Beach in Ceuta

MADRID (Reuters) – Spain’s defence minister accused Morocco of “blackmail” on Thursday over its passivity in the face of a surge in migrant arrivals in the Spanish enclave of Ceuta earlier this week.

The rush of migrants began on Monday when Morocco appeared to loosen border controls, a move widely interpreted, including by the Spanish opposition, as retaliation for Spain’s hosting of a Western Sahara independence leader. The Spanish government, however, has sought to keep the two issues separate.

Defence Minister Margarita Robles said that by creating the conditions for thousands of migrants to swim into Ceuta or climb over fences into the enclave, Morocco had endangered lives “for a purpose I certainly don’t understand”.

“We will not accept any blackmail, no matter how small, or any questioning of our territorial integrity,” she told the radio station RNE.

Robles did not spell out what she was accusing Morocco of trying to obtain from Spain.

Rabat has a territorial claim over Ceuta and Spain’s other north African enclave, Melilla.

The crisis in Ceuta comes after Morocco protested against Spain’s decision a month ago to allow Brahim Ghali, leader of the rebel Polisario Front fighting for Western Sahara to be independent from Morocco, into a Spanish hospital.

While there has been no official comment from the Moroccan government on this week’s events in Ceuta, Minister of State for Human Rights Mustafa Ramid suggested in a Facebook post that they were connected to Ghali’s case.

Ramid said Spain had committed a “reckless and totally unacceptable act” in hosting Ghali without consulting Rabat and that Morocco had “the right to lean back” in response.

Pablo Casado, leader of the centre-right People’ Party said that receiving Ghali in secret was a diplomatic blunder and that the government had shown weakness in protecting Spain’s borders.

“The chaos of this government is our major weakness,” he said.

After the initial surge of migrant arrivals in Ceuta on Monday, Spain deployed troops in the enclave. Over three days this week, Spanish police and soldiers detained as many as 8,000 migrants who swam into Ceuta or climbed over fences and sent a majority of them back to Morocco.

On Thursday morning, both sides of the border in Ceuta were quiet and the beach deserted after Moroccan police stepped in on their side to move away hundreds of youths from the border fence.