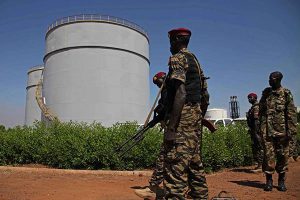 South Sudanese soldiers stand during President Salva Kiir’s visit to an oil refinery in Melut, Upper Nile State,
South Sudan will kick-start an auction of licenses to develop eight oilfields around the country later this month, an oil ministry official said on Wednesday.

South Sudan’s oil production has reached 178,000 barrels per day (bpd) and the country aims for output to reach 200,000 bpd within the next two years, the official said at an oil and power conference.

“We are working on increasing the production of oil,” said Arkangelo Okwang Oler, director-general for planning, training and research at South Sudan’s oil ministry, speaking at an oil conference in Cape Town.

That level was South Sudan’s peak production before 2012, when a five-year civil war brought the young country’s oil industry to a virtual standstill.

“I am optimistic that we are moving toward a stable government,” Oler said.

South Sudan made a small oil discovery in Northern Upper Nile State in August, its first since independence in 2011.

Oler said oil minister Awow Daniel Chuang would officially launch the tender for the licenses at a conference in the capital Juba on October 29-30, and that South Sudan would declare the results in the first quarter of 2020.

“We are inviting companies to come and impart your technologies based on the best international practices,” Oler said. “South Sudan is the current destination for investment.”

German plane collides with Israeli plane prior to takeoff Just minutes before takeoff,