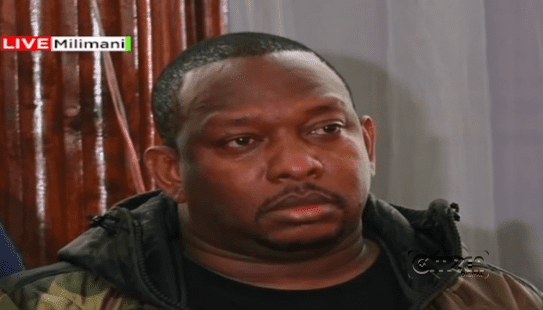 Yesterday Chief Magistrate  Douglas Ogoti allowed Sonko to seek medical attention. Sonko and his co-accused denied multiple charges of corruption before Chief Magistrate Douglas Ogoti at the Milimani Law Courts in Nairobi and were remanded for two more nights pending the ruling on his bail application. Sonko’s lawyers had applied for bail, arguing that the governor was unwell and needed medical attention but the  Prosecution opposed the application on the grounds that the governor was a flight risk having escaped from jail before.

While setting the ruling on the bail applicate date to Wednesday at 11am, the magistrate directed that the governor be treated in the presence of the prison authorities. The Prosecution team led by Gitonga Riungu and James Kihara had objected to  Sonko’s release on bail, citing a1998 case in which he was convicted for failing to appear before a Mombasa court three times. The prosecution referred to the incident in which Shimo la Tewa prison bosses claimed Sonko escaped from lawful custody after going to Coast General Hospital for treatment.

But Sonko’s defence team rebutted this arguing that his alleged escape from Shimo La Tewa was aimed at mudslinging him. Sonko and his co-accused accused face nine charges including conspiracy to commit offence of corruption, willful failure to comply with procurement laws, conflict of interest, abuse of office, unlawful acquisition of public property, deceiving principal, money laundering and acquisition of proceeds of crime.

In the soup are also county officials who have been charged with benefitting from the irregular procurement and payments. They are County Secretary Peter Mbugua; Head of Supply Chain Management Patrick Mwangangi; Negotiation, Tender Opening and Evaluation Committee members Edwin Kariuki, Lawrence Mwangi, Preston Mwandiki and Clerical Officers Wambua Ndaka and Andrew Nyasiego.