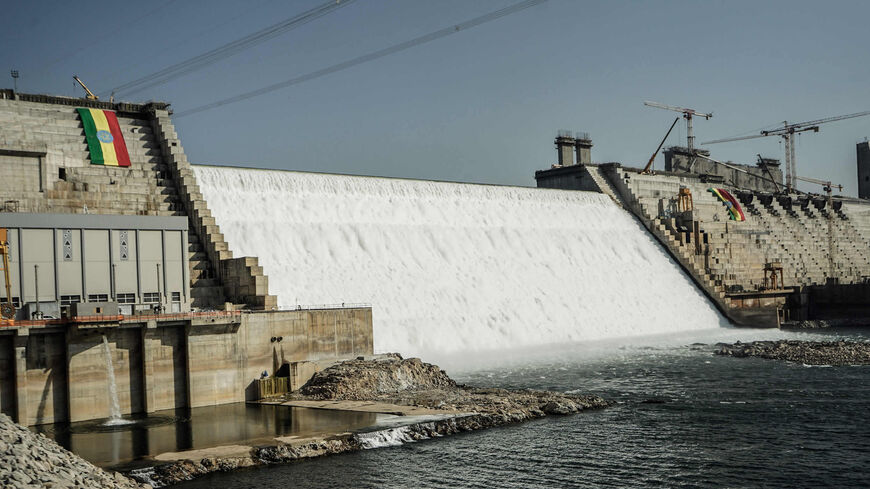 Egypt and Somalia have rejected unilateral actions by Ethiopia involving international river projects and are instead promoting co-ordination and consultation, a statement from the Egyptian presidency has said.

The statement was issued after talks in Cairo between Egyptian President Abdel Fattah El Sisi and Somali leader Sheikh Mohamud, who was visiting Egypt for the first time since his election in May.

Their joint call for collaboration on river projects referred to Ethiopia’s hydroelectric dam on the Nile, the operation of which has been at the heart of a long-running dispute with downstream nations Egypt and Sudan.

A satellite image shows the Grand Ethiopian Renaissance Dam on the Blue Nile river in the Benishangul-Gumuz region of Ethiopia on Tuesday, July 28, 2020. Maxar Technologies via AP

Although not among the 11 Nile basin countries, Somalia shares a border with Ethiopia, the country from which its two main rivers — the Juba and the Shebelle — originate.

It is one of several nations bordering Ethiopia that Cairo has been courting in recent years, including South Sudan, Eritrea and Uganda.

“We were in agreement on the dangers of unilateral policies regarding projects on international rivers, as well as the inevitability of commitment to the principal of co-operation and prior consultations among littoral states to ensure no damage is done to any of them,” the statement read.

“This is in accordance with the relevant principles of international law. Henceforth, there is a need to reach, and without delay, a legally binding agreement on the filling and operation of that [Ethiopian] dam.”

Ethiopia’s “unilateral” actions are believed to be its filling of the dam — which it is doing for a third consecutive year — without informing Cairo and Khartoum. The two allies also protested Ethiopia’s initial generation of power from the dam in February of this year.

Egypt, the most populous Arab nation with 103 million people, maintains that any reduction of its share of Nile waters could wipe out hundreds of thousands of jobs and disrupt its delicate food balance at a time when global food prices are soaring along with energy and shipping costs.

For its part, Sudan wants Ethiopia to share live data on the operation of the dam to avoid ruinous flooding and ensure its own hydroelectric dams operate without interruption.

The two countries also maintain that there were no sufficient geological and environmental studies carried out before the start of construction of the dam, which began a decade ago and is now nearly complete.

Ethiopia, which is building the dam a mere 20 kilometres from the Sudanese border, has to date rejected entering into a legally binding deal, saying guidelines should suffice.

The East African nation has repeatedly sought to reassure Cairo and Khartoum that the Grand Ethiopian Renaissance Dam project was both safe and essential to its own development and would not reduce their water share.

The last round of talks between the three countries on the project were held in April last year. Sponsored by the African Union, the negotiations collapsed in acrimony, with Sudan and Egypt blaming Ethiopia for the impasse, and vice versa.

The US State Department on Saturday said Special Envoy for the Horn of Africa Mike Hammer will travel to the Egypt, the UAE and Ethiopia this week to “provide US support towards forging a diplomatic resolution to issues related to the Grand Ethiopian Renaissance Dam … that would achieve the interests of all parties”.

The statement gave no further details, but appeared to suggest renewed interest by Washington in the search for a resolution of the dispute.

It also came a week after Mr El Sisi discussed the dispute with US President Joe Biden in Jeddah, Saudi Arabia.

“The two leaders reiterated the imperative of concluding an agreement on the filling and operation of the GERD without further delay,” said a White House statement after the July 16 meeting.

Egypt, which depends almost entirely on the Nile for its freshwater needs, has ruled out military action to resolve the dispute, saying it will instead continue to seek a negotiated settlement.

In the meantime, it has taken costly measures to reduce water waste through recycling, lifting state subsidies on potable water and educating farmers on efficient irrigation methods.

Israel and the Nuclear Norm