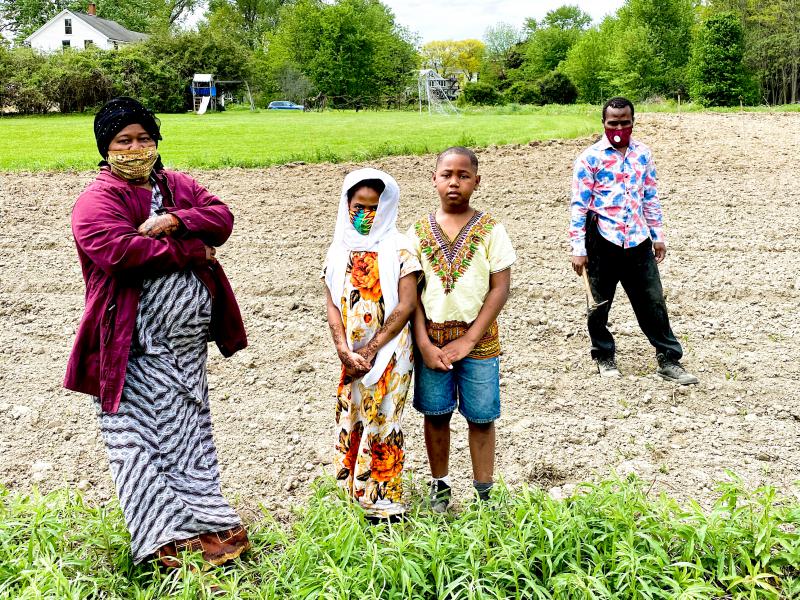 I first met Hassan Aden last spring. My farm in Northampton, Massachusetts, sits right next to the half-acre plot that Aden and his family began working in May.

In previous years, more than a few growers had given up on this fertile but monstrously weedy field.

By July, I knew Aden was different.

Standing next to an okra plant almost as tall as he was, Aden pointed at the surrounding crops.

“Green pepper, hot pepper, tomato, corn, basil,” he said. “Those are all okra. Watermelon, green beans on the other side.”

Aden lives in Enfield, Connecticut, where he works full time for a halal food distributor. He also farms a field in West Springfield, Massachusetts.

The vegetables he’s growing are mostly for his family — he has a freezer full of corn, tomatoes and other vegetables at home. But Aden also aims to make at least part of his income off the land.

Now that Hassan Aden is back to farming at 33, he said he’s regained a part of himself.

Aden is Somali Bantu, part of an ethnic minority who, during the 19th century, were forcibly brought to Somalia as slaves. During the 1991 Somali civil war, Aden’s family was driven from their land to refugee camps in Kenya.

In 2005, Aden was part of a major wave of Somali Bantu refugees who resettled in the United States.

It says a lot about Aden that he’s willing to drive up and down I-91 in order to plant, weed and harvest his own fields. It also says a lot about how hard it is to find affordable farmland in New England. Hassan Aden next to his corn in Northampton, Massachusetts, in July 2020.
Credit Ben James / NEPM

Aden is not alone in seeking workable land. Although many New England farms depend on migrant labor, immigrants face numerous barriers to starting their own farms.

“When I started, I didn’t know how farmers without resources were going to get access to land,” said Hannah Spare, director of the organization All Farmers. Hannah Spare is the director of All Farmers. The organization supports immigrant farmers in finding land and running their own farms.
Credit Ben James / NEPM

Through partnerships with land trusts, municipal governments, and worker collectives, All Farmers helps immigrant and refugee farmers find land, like Aden’s plot in Northampton. They also teamed up with the Pioneer Valley Workers’ Center to help start the immigrant-led Riguezas del Campo farm in Hatfield.

All Farmers supports Bhutanese, Latin American, East African and other immigrant communities in the region, including 40 Somali Bantu families.

Spare said farming is at the core of how many Somali Bantus define themselves.

“When they introduce themselves, they say, like, my name is so and so… I’m a farmer,” she said.

Aden has been farming since he was five. It was the kids’ job to scare away pests from the corn.

“There’s so much monkeys,” he said. “Someone have to stay in the field day or night.”

Aden said the kids slept on top of sheds to protect themselves from lions and hyenas. When squads of monkeys arrived, the children ran noisily into the fields.

Now that Aden’s back to farming at 33, he said he’s regained a part of himself.

Aden’s father, Ibrahim Abdule, also recently resumed farming after decades away from the soil. All Farmers helped him acquire a plot in Hatfield.

“My father is 74 years old right now,” Aden said, laughing. “And he’s still farming. Yeah, he looks sharp. He looks like a 55-years-old-guy.” Corn is at the center of Somali Bantu culture. In early October, the harvest mostly complete, I met Aden and his father in Enfield. Alternating between English and his native Maay Maay, Abdule displayed a half-dozen dishes made from corn grown in Hatfield and Northampton.

Among them was “soor,” a Somali staple made from boiled kernels of mature corn. Other dishes included corn combined with beans and — Abdule searched for the word, speaking briefly in Maay Maay with his son before turning back to say it — pumpkin.

The plots of land father and son now farm not only tie them to tradition. Abdule said they also offer a chance for the family to become less dependent on government services.

“Now we are in the state system,” Abdule said. “But my vision is to leave the state [services] to get enough food from my farm.”

A crucial step toward that independence came this fall at the new Brightwood Farmers Market in Springfield, which ran for four Saturdays in September and October.

The market was created for immigrant farmers to serve immigrant communities.

Rumbila Abdullahi, the market manager, is Somali Bantu and a senior majoring in chemistry at Smith College. She said the farmers on opening day were thrilled. Rumbila Abdullahi is the market manager at a new farmers market in the Brightwood neighborhood of Springfield, Massachusetts. She’s a senior at Smith College.
Credit Ben James / NEPM

The market, which will resume next year, had no vendor fees, and farmers didn’t need to register. Growers just showed up. They spoke Maay Maay, Spanish or KiSwahili. The market manager swiped customers’ food assistance, or SNAP, cards. And the market accepted HIP — or Healthy Incentive Program benefits. That’s up to $80 extra a month for vegetables for SNAP recipients.

Spare said HIP can be kind of complicated.

“So to have someone who speaks your native language at the market being able to explain it to you, how to use your SNAP benefits to get HIP benefits, is huge,” she said.

And five months after Aden and his family seeded corn and other crops in Northampton, he sold his produce at a farmers market for the first time.

The next day, Aden was back in Northampton.

Aden dreams of a bigger farm — at least 20 acres shared by the regional Somali Bantu community. At that moment, however, he simply surveyed his half-acre field, making plans for where he’d plant his corn next year.