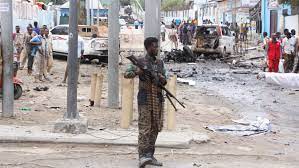 By Abhishek Mishra and Arushi Singh

Somalia has been stated to be a long-overlooked and overdue part of the counterterrorism strategy of the United States (US) in Africa. Owning to the generation of persistent fear due to the ill-fated ‘Operation Restore Hope’ that was part of a multinational force, the United Task Force (UNITAF), and getting immortalised in the Black Hawk Down in 2001, solidified the legacy of US intervention in Somalia in the minds of US public and leaders.

US President Joe Biden recently signed an order authorising the US military to once again redeploy hundreds of Special Operations Forces in the war-torn nation. This move largely reverses former President Donald J. Trump’s decision to withdraw 700 troops from the country in 2020. Following the decision, US troops training and advising Somali and African Union forces have made short and periodic stays in the country. However, this system of rotating in and out and being in transit was considered to be dangerous, expensive, and ineffective. The back-and-forth mobilisation of forces presented considerable risks for the US and allied troops. Previously, the Obama administration had lasered in on the country with the help of “Special Operations troops, airstrikes, private contractors and African allies.” This approach in the past had resulted in the death of allied soldiers and continuous risk of escalation.

To maximise the safety and effectiveness of the US and allied forces, a persistent on-the-ground presence is required that would enable “a more effective fight against Al-Shabaab.” Currently, Biden’s hand has been forced by reports that have indicated that there could be a 71 percent increase in attacks by Al-Shabaab militants. The group, which is al-Qaeda’s largest and wealthiest affiliate, continues to have the capability to strike neighbouring countries and directly pose a threat to the US citizens and interests. This was evident when the group carried out a deadly attack on an American air base in Manda Bay, Kenya in 2020.

The US’ decision for deployment comes in the aftermath of an election in the country that saw President Hassan Sheikh Mohamud coming back to power, who previously led the country from 2012 to 2017. Mohamud has shown a willingness to partner with extra-regional powers, a factor that is likely to inform Washington’s evolving security strategy in the Horn of Africa. President Mohamud welcomed the Biden administration’s move to redeploy troops in Somalia.

This development also coincided with the reconfiguration and transition of the African Union Mission in Somalia (AMISOM) to the African Union Transition Mission in Somalia (ATMIS) created on 1st April 2022. The ATMIS’ activities focus on the disruption of the Al-Shabaab, the mentoring and training of Somalia security forces, and joint planning with them. Without any doubt, the threat posed by Al-Shabaab highlights the need for the new Somali Government to secure a broad-based political agreement on a national security architecture that facilitates a sustainable transition to a Somali-led and Somali-owned security. To achieve this, a constant source of funding, procurement of equipment, and scaling up of air strategic support, particularly with helicopters, would be essential.

There remain enormous concerns regarding US boots on the ground including no clear time frame for the deployment, the possibility of a repeat of the debacle of the 1990s operation, and the deployment providing legitimacy to claims of terror groups who question the larger US involvement in the region. Furthermore, the question pertaining to resource allocation can be raised at a time when the European theatre is witnessing an ongoing war while deployment in Somalia reveals itself to be a continuation of the “forever wars.”

Additionally, Al-Shabaab is a major political force in Somalia, and therefore, requires more nuanced responses. This has been partly addressed by the deployment that would be involved in capability building for the country’s “fledgling government and other partners to turn intelligence into operations.” Nevertheless, the country itself has been susceptible to various challenges such as protracted conflict, drought, and climate change-induced displacement with limited avenues for grievance resolution that require systemic solutions, providing terror groups with an entry point, and in turn, necessitate US troop deployment in the country.

President Biden’s decision to suspend a permissive set of targeting rules put in place by the Trump administration, instead of requiring requests for drone strikes to be routed through the White House, reinforces stricter White House control of US military and spy agencies’ ability to plan and execute secretive missions. Furthermore, since President Biden took office, US airstrikes have largely been limited to those meant to defend partner forces facing an immediate threat or in the event of “collective” self-defence of Somali forces. Practically, this means that strikes would only have an effect if a US adviser is standing beside Somali forces. Such an approach would only provide a temporary, band-aid solution, without addressing the root causes of the conflict.

Debating US renewed war in Somalia

The US has been trying to curb Al-Shabaab using military forces for over fifteen years without having much success. The billions of dollars of investments in training, equipment, and US lives have yielded practically no return. The US’ failed nation-building exercise in Afghanistan which resulted in Taliban rule with the withdrawal of US forces should serve as a warning and discourage the US from treading the same path in Somalia.

The current decision to deploy troops highlights the fact that the US still has its eye on the ball in terms of its counterterrorism priorities. Close and coordinated cooperation with the Somali Danab Advanced Infantry Brigade that has been participating in offensive operations in the country is essential. This needs to be complemented by proper intent from the Somali leadership, and continued support from neighbouring countries like Djibouti, Kenya, and the international community. Despite this decision to send troops to Somalia being “persistent” rather than permanent, it certainly indicates the US’ desire to curb the level of threat from Al-Shabaab and achieve the broader goal of ending instability in the Horn of Africa region.

However, it is hard to argue that Somalia needs more US troops. It instead requires more investments in community-driven, bottom-up approaches to peace that rely on building trust and connection with locals. President Biden’s decision to renew the US war in Somalia continues to place the US in a military-first mindset, which in the past failed to yield desired outcomes. The Somali state’s legitimacy is not going to come from foreign military intervention or training. It is instead going to come from a concerted diplomatic effort to address the root causes of instability and conflict.

Somalia’s election was different: why that’s not necessarily a bad thing