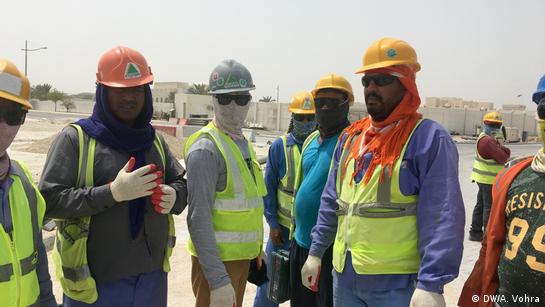 Rejimon Kuttappan
“In 2015, when I joined Leighton Contracting Qatar as a land surveyor, I felt proud,” Varun Babu, a migrant worker from India, recalled. “Big company and good salary – we built the Doha Orbital Highway, part of the 2022 FIFA World Cup! But in March 2020, everything turned upside down.”

Covid-19 in Qatar. Given the thousands of migrant workers who died while building infrastructure for the games, the pandemic’s non-lethal effects in the country can feel almost like a footnote. But the terminated employment and theft of wages and benefits that thousands of migrant workers experienced as the virus spread constitute a tragedy unto themselves. For many, it was never resolved.

“The company called us to the office and told us to resign,” Babu continued. “I didn’t, because it is hard to reclaim the end-of-service benefits if we resign. But if they terminate us, we can claim it.”

For Babu, the stakes were high. He expected to receive around $5,500 as his end-of-service benefit. Babu was told that he would be paid soon, so he waited. He stayed in Qatar as long as he could. But it didn’t come. “Finally,” Babu said, “when we couldn’t manage money, even for food, a few of us returned, giving up hope.”

Accounts of wage theft have dogged the production of the 2022 FIFA World Cup in Qatar almost since its inception. Already in 2014, The Guardian was reporting that hundreds of migrant construction workers from Bangladesh and Nepal had gone without wages for more than a year. They had been tasked with building, of all things, the luxury offices for the tournament’s organisers in Al Bidda Tower – nicknamed ‘the Tower of Football’.

In India, that is huge money for us. If I am not going to get it, then life will be horrible.

That same year, international trade unions complained to the ILO that Qatar was not complying with international labour standards. They alleged that the ‘kafala’ or sponsorship system – which ties employees to a certain employer – enables exploitation and forced labour, and that the authorities were not adequately detecting violations of labour rights.

The complaint eventually led to a slate of labour reforms hammered out in intense negotiations between Qatar and the ILO. This included the creation of labour tribunals, an unpaid wages support fund, and regulatory mechanisms to verify that wages promised were paid. In March 2021, Qatar adopted a minimum wage that applies to all workers, of all nationalities, in all sectors – a first for the Gulf.

Despite these reforms, Babu’s story shows that forms of wage theft persist in Qatar. Indeed, the Covid-19 pandemic opened up new ways for wage theft to take place. As the ILO reported at the time about migrant workers in the Arab States in general:

Numerous civil society organizations have voiced the concern that COVID-19 has led to a major increase in non-payment of wages, with some employers taking advantage of the pandemic to unlawfully dismiss their migrant workforce and to withhold the wages and benefits that were owed to them. In other cases, employers were alleged to have placed migrant workers on drastically reduced salaries, forced them into unpaid leave without their consent, made unlawful deductions from the salary of the worker (including for accommodation or personal protective equipment) or refused to pay for the return ticket of the worker upon termination of their employment.

In conversation, Indian migrant workers to Qatar confirmed this account to me. They were laid off and repatriated without clearing their end-of-service benefits and unpaid salaries following the Covid-19 outbreak.

Migrants rights NGOs, meanwhile, catalogued case after case of wage theft happening to migrant workers in Qatar, the wider Gulf, and other major destination countries. “Wage theft was there before Covid-19 and the pandemic outbreak amplified the situation,” said Sumitha Shaanthinni Kishna, Chair of Migrant Forum in Asia. “Migrant workers depend entirely on their wages to provide for themselves and their families. By robbing off their wages, the employer not only pushes workers into trouble but also his family and their future too.”

In 2022, seven years after the reforms were first introduced, Qatar’s Ministry of Labour recorded 5,717 wage-related violations.

At times the story ends with restitution, albeit delayed by months or even years. Babu, for example, managed to claim his lost end-of-service benefit by turning to Migrant Forum in Asia for help. “I managed to get 18 co-workers to fight for our wages,” Babu said. “We were eligible for $161,410. And in 2021, the MFA managed to get us back our money. They helped others too in the following months.”

Others are still fighting. Kiran Paul (name changed), who migrated to Qatar in 2012 and worked on the Al Bayt stadium, is still waiting to receive his due. He had operated an asphalt mixing plant in exchange for $1215 a month, and had often worked unpaid overtime (another form of wage theft). In spring 2021, he received a letter terminating his employment, but also promising him his last two months of unpaid wages and the end of service benefit accrued over nearly a decade of work. Paul said he stayed in Qatar for nearly a year waiting for the money to come through. But like Babu, he was forced to return emptyhanded once survival became difficult.

“We had worked for 10 hours, but we were paid only for eight hours. We are ready to give up that overtime money. But we have to get our pending salary and end-of-service benefits,” Paul said. “The company has to give me 41,000 Qatari rials [approx. $11,260]. In India, that is huge money for us. If I am not going to get it, then life will be horrible.”

That may well be the outcome for Paul. He added: “Now, the game has started. We are losing hope. Will the company of the Qatar government bother to pay us? I don’t know.”

The man behind the alleged coup plot in Germany

President William Ruto on a two-day official visit in Eritrea