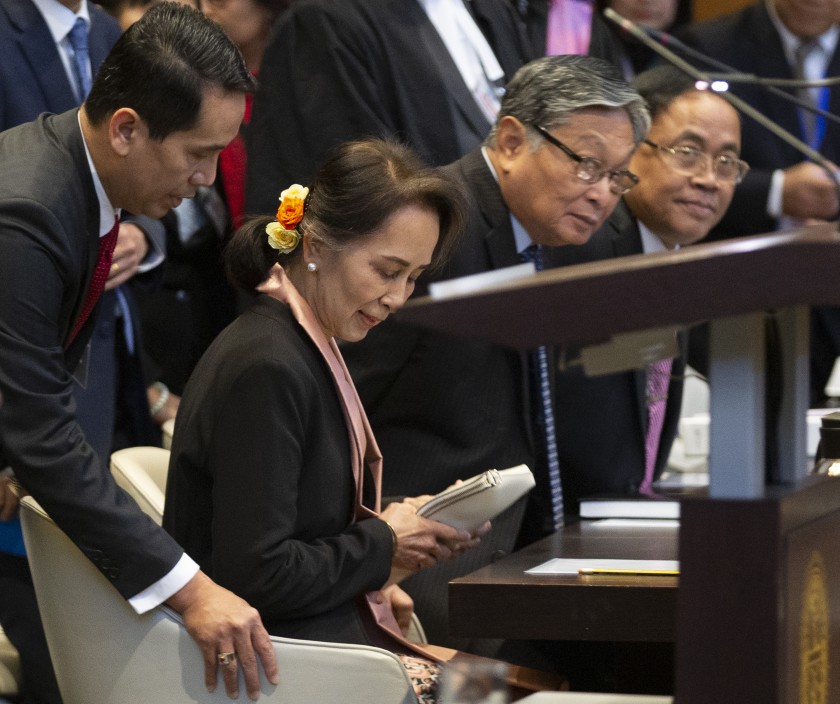 Aung San Suu Kyi has been told that her silence over allegations of sexual violence and rape carried out against Rohingya people in Myanmar “says far more than your words”, on the third day of the international court of justice’s hearing into accusations of genocide.

Prof Philippe Sands QC told the court: “Not a word [has been said by Aung San Suu Kyi] about the women and girls of Myanmar who have been subjected to these awful serial violations. Madame Agent [her status in court], your silence says far more than your words.”

Myanmar has not disputed at the ICJ hearing reports that 392 villages were destroyed in military clearance operations, or commented on widespread allegations of organised sexual violence and rape, the court was told.

Sands was speaking for the Gambia, which has brought the charge that Myanmar’s military carried out mass murder, rape and destruction of Rohingya Muslim communities.

It alleges there have been “extrajudicial killings … sexual violence, burning of homes and destruction of livestock … calculated to bring about a destruction of the Rohingya group in whole or in part.”

Sands told the tribunal that one of the lawyers representing Myanmar – Prof William Schabas, of Middlesex University – said during an interview with al-Jazeera in 2013 that the situation in Myanmar was approaching genocide. Sands read from Schabas’s interview, in which he said: “We are moving into a zone where the word [genocide] can be used in the case of the Rohingya.”

Sands said genocide was “not a numbers game. The intent to destroy a group in part is sufficient [for the charge to be proved]. Entire Rohingya villages have been destroyed. Such destruction of an entire community in a limited area on the grounds of ethnicity or religion can properly be characterised as acts of genocide.”

The session at the United Nations’ highest court has been convened to consider whether protective “provisional measures” should be imposed to prevent further killings and destruction in Myanmar.

Sands said evidence of the killings was now being destroyed by the Myanmar authorities as Rohingya villages were bulldozed flat. He said the world would be “shocked” if the court declined to grant the provisional measures.

Paul Reichler, an American lawyer speaking for the Gambia, said six of Myanmar’s most senior army officers have been accused of genocide by a UN fact-finding mission and recommended for criminal prosecution.

A photograph of 10 Rohingya Muslim men with their hands tied behind their backs under the guard of Myanmar soldiers was shown to the 17 judges, followed by a second photograph of the men’s bloodied bodies lying in a ditch.

Reichler pointed out that as recently as Tuesday the US had imposed fresh sanctions on senior Myanmar military generals based on evidence assembled by the UN mission that warned about genocide and recommended criminal charges.

Foremost among the officers was Gen Min Aung Hlaing, commander-in-chief of Myanmar’s forces, Reichler explained, because they were primarily responsible for carrying out the clearance operations.

“Six of Myanmar’s top generals including the commander-in-chief, Min Aung Hlaing have all been accused of genocide and recommended for prosecution [by the UN fact-finding mission],” Reichler said.

Min Aung Hlaing’s Facebook page, before it was taken down, “described the Bengali [Rohingya] problem as a yet unfinished job which the government in office is taking great care in solving”, Reichler said.

As a consequence of the photographs of the massacre of 10 Rohingya men, he said, the Tatmadaw, as Mynamnar’s armed forces are known, arrested not the soldiers but the Reuters reporters who had taken the photographs.