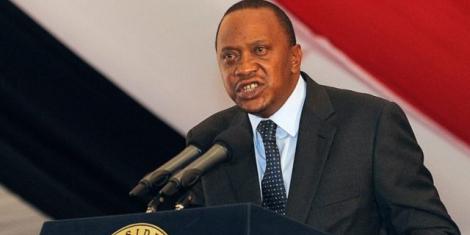 BBC had reported that Oxford University researchers were considering testing their vaccines on Kenyans due to the lower transmission rates in the region, an issue which sparked outrage among a section of Kenyans.

Fergus Walsh, a medical correspondent at BBC had said the Oxford team were planning to launch the tests in the country if it will not get quick results with ongoing trials in the United Kingdom.

Nonetheless, the President dismissed these reports saying “there are those saying that research is ongoing where Kenyans are being used as guinea pigs for vaccine tests, there are no truths to such allegations.”

He said research institutes in the country are working on a similar project to find a cure for COVID-19 which has so far infected 343 and claimed 14 lives in the country.

The President assured that his Government would notify Kenyans in case of any plans to conduct the vaccine tests in the country.

“Kenya Medical Research Institute (KEMRI) and Primate Research Institute are involved in a global effort to try and find a vaccine and once we have found one and have reached an area where this vaccine can be tested on humans, we shall let you know, nothing will be kept in the dark,” he assured.

The Ministry of Health Friday had denied knowledge of plans by Oxford University researchers to conduct the vaccine trials in Kenya.

“There are vigorous procedures of ethical review and approach of any clinical trials and we have a robust structure under the Pharmacies and Poisons Board (PPB) that is responsible for regulating and reviewing clinical trials,” Amana said.

Oxford’s human trials for coronavirus vaccine begun in Europe with 800 volunteers recruited for the study. The Oxford team is targeting 5,000 more recruits in the coming months.

Should the trials become effective, the scientists say a million vaccines will be ready by September.

Globally, there are nearly 3 million infections with almost 200,000 deaths and more than 800,000 recoveries recorded.