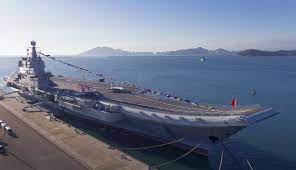 China’s homegrown Shandong aircraft carrier: The Djibouti base is capable of accommodating both aircraft carriers and the latest amphibious assault ships.   © Xinhua via Kyodo

Beijing looking for other basing opportunities in Africa, US commander says
April 27, 2021 03:02 JST

BEIJING — China has completed a pier large enough to accommodate an aircraft carrier at a naval base in the eastern African nation of Djibouti, which could potentially allow the country’s navy to project power outside the traditional operating areas of the East and South China seas.

The facility, China’s first and only overseas military base, sits near the strategically important Bab-el-Mandeb Strait linking the Indian Ocean and the Red Sea. It was built in 2017 as a naval “support facility” that Beijing said would be used as a base for anti-piracy operations off the coast of Somalia and responding to accidents at sea.

“They have just expanded that by adding a significant pier that can support even their aircraft carriers in the future,” Gen. Stephen Townsend, commander of the U.S. Africa Command, told the House Armed Services Committee last week.

“Around the continent, they’re looking for other basing opportunities,” he added.

Beijing now has two carriers — the Liaoning, which was refurbished from a warship purchased from Ukraine, and the homegrown Shandong — with a third domestically developed carrier expected to enter service within the next few years.

“They are literally everywhere on the continent,” Townsend said. “They’re placing a lot of bets down.”

The expansion of the Djibouti base comes at a time when the U.S, Japan and their partners push for a “free and open Indo-Pacific,” and underscores that the Indian Ocean is becoming the focal point of the great power competition between Washington and Beijing.

The facility reportedly is now also capable of handling the new Type 075 amphibious assault ship, which is being positioned at the core of China’s land warfare capabilities. Amphibious warships have large decks that can accommodate aircraft with short-takeoff and vertical-landing capabilities, like America’s F-35B, enabling them to play a role similar to aircraft carriers.

A commissioning ceremony for the first vessel in the class was held in Hainan on Friday, attended by President Xi Jinping. Beijing is expected to commission its second Type 075 ship as early as this year, and a third was launched in January.

China’s People’s Liberation Army aims to have multiple strike groups centered around amphibious warships, much like the U.S. military, to increase its reach. Carrier groups could be involved in defending sea lanes linked to infrastructure projects under the umbrella of the Belt and Road Initiative.

This year’s legislation granting the country’s quasi-military coast guard broad powers explicitly cites protection of overseas interests as one of the force’s goals.

Port facilities being built with Chinese support near key sea lanes, in countries including Sri Lanka, Pakistan and Myanmar, have provoked unease. “They could be put to military use in the future, as supply hubs, for example,” a Japanese government source said.

China’s growing maritime assertiveness has increasingly put it at odds with the U.S., Europe and Japan.

American forces in February held a rare exercise near the Japan-administered Senkaku Islands, which are claimed by China. The Quad security grouping — the U.S., Japan, India and Australia — held a joint drill this month in the Bay of Bengal, led by France, which also has military facilities in Djibouti and may have been irked by Beijing’s presence there.