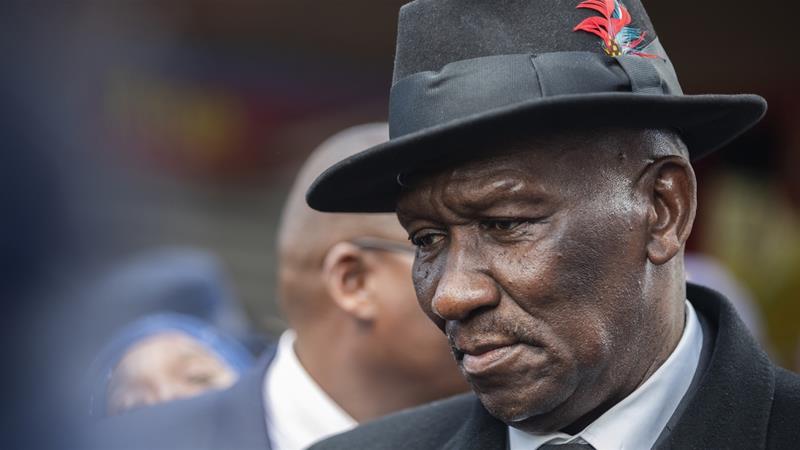 Cele said an ‘urgent investigation’ was launched ‘to establish the identity of the person behind such sacrilege’ [File: Nic Bothma/EPA]

Video shows police entering a room where about 20 Muslims were praying during coronavirus restrictions.

South Africa’s police minister Bheki Cele has apologised for a “blasphemous” remark made by a policeman to praying Muslims as he was enforcing lockdown rules.

The apology, issued on Sunday by the minister through a statement, came after the event was caught on video.

The images, posted on social media and authenticated by the authorities, show police entering a room on Saturday where about 20 Muslims were praying, and ordering them to the ground.

Cele said he “issued an apology to the Muslim community for the blasphemous remarks during the arrest” and an “urgent investigation” was launched “to establish the identity of the person behind such sacrilege” in the incident which took place in the Mpumalanga province.

In a separate statement, the police said the policeman’s comment was “rather unfortunate and it is unacceptable that someone could make such an utterance”.

It also said that people of all religions had to respect rules during the confinement. On Friday, police had already detained 17 people at a religious ceremony for violating lockdown rules.

The Jamiatul Ulama South Africa Council of Muslim Theologians said not only were the remarks “demeaning in the name of the Prophet Muhammad”, but police entering a prayer room with “their heavy boots”, as seen in the video, was “distressing to Muslims who consider prayer places as sacred”.

The incident took place as South Africans are under orders to observe strict confinement to fight the spread of the coronavirus, and are allowed to leave their homes only to buy food or for medical appointments.

All other gatherings are strictly prohibited.

South Africa is the worst-hit sub-Saharan country by the coronavirus outbreak. More than 85 people have died amid more than 4,350 infections, according to data from Johns Hopkins University.