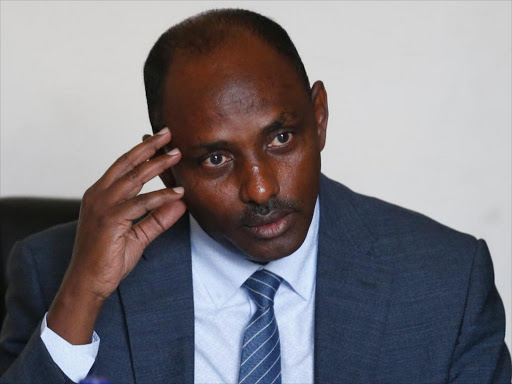 Low revenue collection, a ballooning debt and the economic challenges of Covid-19 have plunged Kenya into a cash crunch, with all indications clear that the government is struggling.

On Monday, Interior CS Fred Matiang’a hinted at a looming pay cut for civil servants in a desperate move to ease pressure on recurrent expenditure, weighed down by dwindling domestic revenue collections.

In an interview with a local TV station, Matiang’i admitted that although no one loves a pay cut, the government is facing a tough situation.

“All of us are going to be called upon to accept these extraordinary measures because we are dealing with extraordinary circumstances. If it comes to that (pay cut) so be it,” Matiang’i said.

He added that some of the major development projects are going to be affected as the government cuts back on spending.

His sentiments were the closest admission by a senior state official of a cash crunch in the Jubilee administration that has turned to borrowing for survival amid low revenue collection.

Concern is growing about the dire state of the economy.

“No matter what obstacles stand in our way, nothing can stand in the way of millions of Kenyans yearning for change. We cannot continue with the level of the national debt, cartels raping Treasury, government parastatals and our counties while our people languish in poverty,” Narok Senator Ledama Ole Kina said on Tuesday.

According to the Quarterly Economic and Budget Review by the National Treasury, for the first three months of the financial year, the national government’s collection stood at Sh378.7 billion against a target of Sh428.9 billion.

This is a shortfall of Sh50.2 billion, attributed to underperformance in Pay As You Earn, value added tax (both domestic and imports), excise duty and import duty.

Low revenue collection threatens to stall operations both in the national and county governments.

Treasury’s data, for instance, shows that Sh357.1 billion was spent on recurrent budget between July 1 and September 30 against a target of Sh397.6 billion, an indication of pending operational expenses in government offices.

The Exchequer has managed to send only Sh28.8 billion to counties in the first quarter against the provisional target of Sh64.9 billion, a move that has seen employees in several counties go without salaries for at least two months.

Early this month, Council of Governors chairman Wycliffe Oparanya protested to Yatani for the delayed disbursement and warned of another shutdown should the crisis persist.

In a letter dated November 2 to the Treasury CS, Oparanya said counties had not received the September and October allocations as provided for in the Division of Revenue Act.

“To this end, county employees have not been paid salaries for the month of September and October. The implementation of the development budget for quarter four is also lagging behind,” Oparanya said.

Yet, the Exchequer has projected a further drop in domestic revenue collection, citing low business activities and tax relief measures implemented to cushion citizens against the adverse impacts of the pandemic and increase liquidity.

According to the 2020 Budget Review and Outlook Paper already tabled in Parliament, the National Treasury wants collection targets for the Kenya Revenue Authority lowered, despite a proposal to raise expenditure for the year to Sh2.92 trillion up from Sh2.76 trillion.

To seal the wide budget deficit, the Exchequer wants borrowing for the year to be increased to Sh1.002 trillion. The country had in June planned to borrow Sh841 .1 billion to fund the budget deficit for the current financial year.

On Monday, it was revealed that Kenya has applied for $2.3 billion (about Sh250 billion) from the International Monetary Fund under the lender’s extended fund facility.

“The country is also looking at areas of reduced debt vulnerabilities through a revenue-driven fiscal consolidation,” Yatani said.

The loan request comes six months after the lender gave Kenya $739 million (Sh79 billion) Rapid Credit Facility in May to help the country cover the balance of payments shortfall.

A week after the disbursement of the IMF funds, the country secured a $1 billion (Sh106 billion) loan from the World Bank to support its budget and cushion the economy from the vagaries of the Covid-19.

Apart from international debt, the country has accumulated a record Sh264.8 billion in domestic debt in four months (July 1 to October 31).

This, despite various institutions both locally and internationally warning about the country’s piling debt that was estimated at Sh7.1 trillion as at September 30.

Last week, a report by the Financial Times listed Kenya among countries likely to default on external loans in the next five years.

Quoting an info data by IHS Markit titled ‘Investors fret over sovereign bankruptcies in coming years’, the paper said Kenya’s probability of defaulting had grown to 35 per cent.

“Annual budget deficit and the attendant public borrowing remain the Achille’s heel (a weakness in spite of overall strength, which can lead to downfall), in Kenya’s fiscal framework,” Muraguri told the Star.

Amos Koech, an economic scholar, on other hand likened Kenya to a greedy ruminant that eats more than it can chew.

“We have a problem with high budget expectations in this country. We should learn to live within our means,” Koech said.

The tough times have seen the Jubilee government slowly shy away from full implementation of the Big Four Agenda of manufacturing, food security, universal health and affordable housing, items that have since been placed under the Medium-Term Plan III.

This is the nationwide multi-sectoral document that outlines the main policies, legal and institutional reforms as well as programmes being implemented by the government, with timelines for 2022 and beyond.