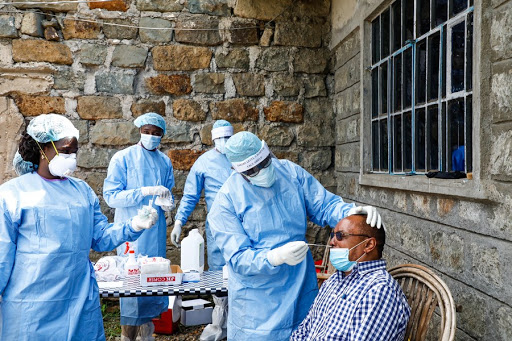 The Government on Sunday warned over a potential second wave of COVID-19 pandemic, with a steady rise in cases of infections recorded since the beginning of October.

From one percent infection rate on 1st October, the infection rate had risen to 12 per cent by Sunday, 18 days later when Kenya recorded 685 new coronavirus cases from 4, 912 samples.

And in just 2 days, Kenya had lost 19 lives to the virus, raising the country’s death toll to 832.

“This is a sign that we are headed into tough times ahead,” Kagwe said, “we must behave and behave well by following the guidelines issues by the Ministry of Health.”

He decried what he described “as outright disregard of COVID-19 protocols from bars to events like weddings and political rallies.”

“The younger people are the ones who are taking the greatest risks with this disease and flirting with it. This is not a problem of the youths as such, we have seen a return to normalcy, even among health workers. These times are not normal and please do not treat them normally,” the CS asserted.

He noted that counties like Kilifi, Nakuru, Kisii, Kisumu, Bungoma, Nairobi and Mombasa are in “a worrying trajectory.”

“The spike we are witnessing has not just erupted out of nowhere. It has been triggered by wanton violation of containment protocols and advice from our experts,” he said, and cited heightened political activities in the country.

Kenya lifted tough containment measures last month when bars, schools and churches were reopened after closure in March at the height of the COVID-19 pandemic.

“I find this ironical since it is those businessmen who pleaded with the President to re-open the businesses because of the hardship they were facing because of the closure,” he said warning of “possible escalation of restrictions” if the trend is not reversed.

“Somebody has to take responsibility. It will start with the political leaders, business owners and event organizers,” he said.

But even as he issued the warning, the political class was preparing for more heightened political activities associated with the Building Bridges Initiative (BBI) report which is due out on Wednesday ahead of the formal launch later on in the week..