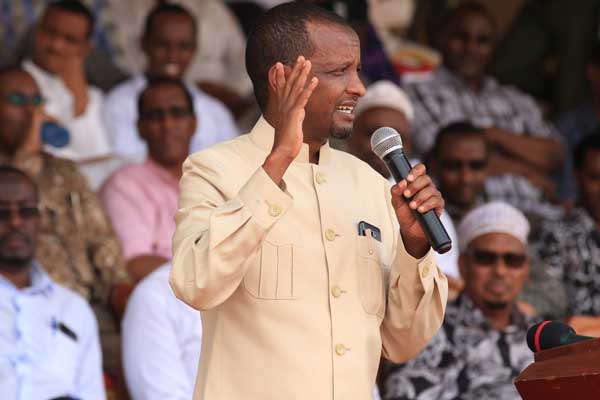 Mandera East Member of Parliament (MP) Omar Maalim has asked the national government to explain the presence of a Jubbaland minister in Mandera County, saying he is a security threat to residents.

In a private notice number 02/2020 presented on Wednesday at parliament, Mr Maalim sought a clarification from the Ministry of Defence on the presence of Mr Abdirashid Hassan Abdinur alias Abdirashid Janan in Mandera East Constituency.

The MP claimed the minister crossed into Kenya with over 100 armed soldiers and has been in Mandera town causing security tension since January.

He arrived on January 30 and was booked to stay at a local hotel by Kenyan security teams in Mandera.

He left the hotel on February 10 and rented a house within Mandera town where he has been operating from under the close watch of Jubbaland forces and the Kenya Defence Forces (KDF).

The Mandera East MP said the minister and his troops are now settled at Border Point 1 area within his constituency.

“The CS has to explain measures put in place by the State to mitigate security challenges posed by the presence of the fugitive minister,” he said.

Mr Maalim is also seeking an explanation from Cabinet Secretary Monica Juma on the role played by KDF in guarding the fugitive minister.

He wants the state to make public the legal framework under which the Jubbaland military forces were allowed in Kenya fully armed.

“People of Mandera are under siege following the presence of this minister and his forces. Some have vacated their residences fearing bloodshed between the two factions,” he said.

Mr Abdinur, now a fugitive, escaped from a Mogadishu prison on January 28 where he had been held since August 31, 2019.

He is wanted for several crimes including international human rights violations, massacre of innocent civilians at Gedow Region and illegally escaping government custody.

Military troops from the Federal Government of Somalia that have been pursuing him have camped at Bulahawa town scheming a raid on the minister’s residence.

Residents say a day cannot pass without gunshots from the direction of the fugitive minister’s residence.

He argued that Somali armed forces were causing unnecessary tension in the town.

The minister’s stay has strained the diplomatic relationship between Kenya and Somalia.

The neighbouring country has accused Nairobi of harbouring a fugitive.

Amnesty International has asked Kenya to arrest and handover the minister, saying he “must be returned to face justice.”

The government of Somalia has since gone on to warn neighbouring countries that harbouring the wanted minister could jeopardise relations.

Mr Abdinur is the second high ranking government official from Jubbaland to seek refuge in Mandera.

In September last year, Jubbaland Vice-President Mohamud Sayyid Adan was forced to hide in the northern county for several weeks.