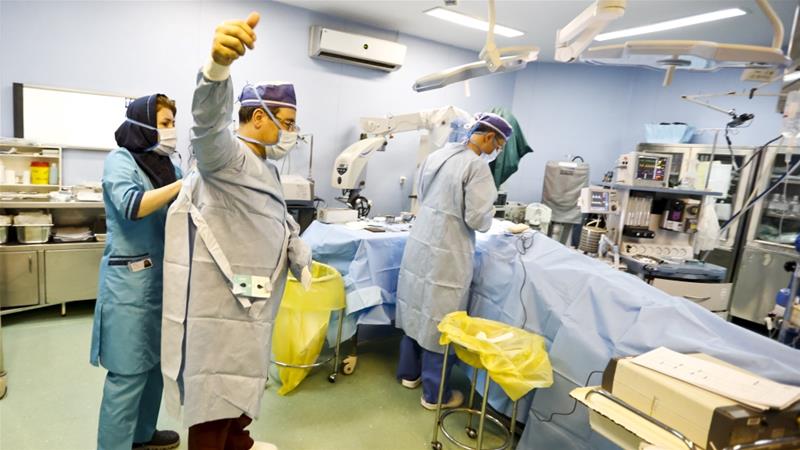 When Ghazal* had an operation at a hospital in Tehran to remove a tumour from her thigh, she hoped surgeons could take the whole growth out.

But a crucial tool used to prevent the spread of cancer could not be imported because of sanctions the United States has imposed against Iran. And her case highlights a growing problem, according to a new Human Rights Watch (HRW) report.

The equipment that could have been used to place radiation sources inside of her body to destroy cancer cells and thereby reduce the risk of cellular contamination could not be purchased and imported because of US restrictions on Iranian financial institutions.

“Sanctions have prevented me from recovering if they haven’t already ended my life,” said Ghazal, who asked that her full name not be used due to political sensitivities. Her cancer returned one year later and is now spreading through her hip.

The HRW report claims that although humanitarian trade is exempt from US sanctions, “broad restrictions on financial transactions, coupled with aggressive rhetoric from US officials, have drastically constrained the ability of Iranian entities to finance humanitarian imports, including vital medicines and medical equipment”.

By listing Iran’s central bank as a Specially Designated Global Terrorist on September 20, the White House hampered the entity that provides foreign currency for anyone bringing medical goods into Iran.

US sanctions are deterring banks and foreign companies from engaging in any kind of trade with the country. According to the report, this leaves “Iranians with rare or complicated diseases unable to get the medicine and treatment they require,” said Sarah Leah Whitson, Middle East director at Human Rights Watch.

Iran produces 97 percent of its medicines locally, but a third of these drugs are made with active ingredients that are imported, according to the head of Iran’s Food and Drug Organisation.

People like Ghazal are hit particularly hard by the impact that US sanctions are having on Iran’s supply of medicines. The majority of drugs used to treat rare and chronic diseases, as well as multiple forms of cancers, are part of the three percent of essential medicines that Iran needs to import. 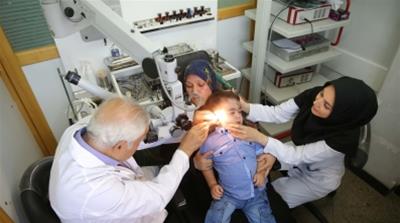 “It’s very difficult to deal with all of this,” says Ghazal. “And it costs a very high price, as the health insurance doesn’t cover any expenses,” she added. Pazopanib, the chemotherapy drug she needs, does not have a local equivalent.

Ghazal spends about 45 million rials ($1,350) a month on medication, basically the entire monthly income of a typical urban household, according to data gathered by the Statistical Centre of Iran.

Medical costs could rise even further if oil revenues – which sustain Iran’s currency and economy – continue to fall. The International Monetary Fund (IMF) predicts that inflation could reach 37 percent this year, six points higher than the inflation rate in 2018.

For Iranians who cannot afford to buy foreign medication, the only option is to use the local equivalent covered by Iran’s national health insurance.

“In order to fill the gap left by foreign pharmaceutical products, the ministry of health increased the production of local medicines,” explains Fereshte*, a medical researcher in Tehran, who also was not comfortable sharing her surname.

“But the quality is not the same,” she added, referring to Iranian companies that started seeking alternative sourcing for raw material from Chinese and Indian markets – raising concerns among experts about the quality of the resulting products.

Dr Babak Roshanaei-Moghaddam, founder and director of the Tehran Center for Psychoanalytic Studies, works with patients suffering from the side effects of switching from foreign drugs to their local equivalents.

“Patients develop defences,” said Roshanaei-Moghaddam, explaining how the Iranian version of the antidepressant Zoloft gives some of his patients’ nausea and diarrhoea. “Definitely, the local manufacturing quality control is not as developed and stringent as [that] of foreign companies”.

In addition to being cheaper and less reliable, the number of medicines being locally produced and covered by insurance is shrinking.

In June 2019, the Young Journalist Club news agency published a list of 79 medications that the government regulator labelled as no longer covered in Iran.

The HRW report comes only days after Washington officially named Iran as a jurisdiction of primary money laundering under the US Patriot Act. The October 25 designation came alongside the US Treasury’s launch of a so-called humanitarian channel.

According to the rules of the new mechanism, financial institutions are required to conduct “special due diligence” on accounts that they hold with Iranian banks to ensure that funds associated with humanitarian trade are not used “by the Iranian regime to develop ballistic missiles, support terrorism, or finance other malign activities”.

Critics argue this designation is an excuse for Washington to gain access to information on Iranian banks. The Trump administration could use data about assets held by Iranian entities to determine which of them it may target in the future.

“The consequence of this action will be to further sever Iran’s banks from the global financial system and will lead those few European banks continuing to facilitate humanitarian trade to cease all dealings with Iran,” Tyler Cullis, a lawyer who specialises in sanctions law at Ferrari & Associates told Al Jazeera.

As part of the Treasury statement, the US special representative for Iran, Brian Hook, said that the new channel would make it easier “to engage in legitimate humanitarian trade on behalf of the Iranian people”, adding that the US “will continue to stand with the Iranian people”.

But Ghazal feels like she is standing alone: “If the US government was really standing with us … it would have not taken away everything we have,” she told Al Jazeera. “Or it should not have left patients with no other choice but to die”.

*Some people’s names have been changed to protect their identities.