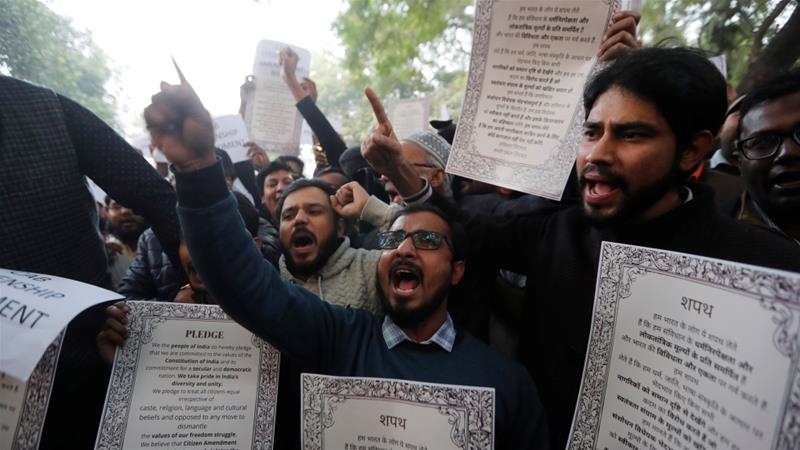 Critics say the bill is discriminatory against Muslims and violates constitution.

A day after clearing the lower house, the Citizenship Amendment Bill was passed on Wednesday by the upper house, with 125 members voting in its favour and 105 against it.

“Muslim citizens of this country have no reason to worry,” Amit Shah, federal home minister in the Hindu naton, said in Parliament. “This bill is intended to give citizenship, not take away citizenship.”

Several opposition lawmakers said the bill would be challenged in court.

“The passage of the Citizenship Amendment Bill marks the victory of narrow-minded and bigoted forces over India’s pluralism,” said Sonia Gandhi, leader of the main opposition Congress party.

Meanwhile, Prime Minister Narendra Modi said it was a “landmark day for India” and the passage of the bill will “alleviate the suffering of many who faced persecution for years.”

“Glad that the #CAB2019 has been passed in the #RajyaSabha. Gratitude to all the MPs who voted in favour of the Bill,” Modi tweeted after the vote.

Al Jazeera’s Anchal Vohra, reporting from New Delhi, said “there is a palpable sense of fear in areas where Muslims Indian citizens live.”

Protests against the measure have flared in various parts of India, including the ethnically diverse northeast, where people fear that undocumented Hindu migrants from neighbouring Bangladesh could be granted citizenship.

In Assam state, thousands of people protested overnight across several towns and cities, some joining processions carrying torches. Police said they used tear gas to beat back protesters in at least two cities.

“We have seen massive protests in the northeast of India today that have turned violent. Police reacted and fired tear gas at them. We have also learnt that the Indian army is on standby in the state of Asam,” Vohra said.

“Some of these people are protesting saying they don’t want any migrant to be given Indian citizenship whether Hindus or Muslim because they want to protect their indigenous culture,” she added.

Faizan Mustafa, an expert on constitutional law and vice chancellor at NALSAR University of Law in Hyderabad, said the bill goes against the country’s constitution.

“It is constitutionally suspect and legally untenable but let’s see what the Supreme Court does in this case,” Mustafa added.

Modi’s government – re-elected in May and under pressure over a slowing economy – said Muslims from Afghanistan, Bangladesh and Pakistan are excluded from the legislation because they do not face discrimination in those countries.

Also left out are other minorities fleeing political or religious persecution elsewhere in the region such as Tamils from Sri Lanka, Rohingya from Myanmar and Tibetans from China.

Many Muslims in India say they have been made to feel like second-class citizens since Modi came to power in 2014.

Several cities perceived to have Islamic-sounding names have been renamed, while some school textbooks have been altered to downplay Muslims’ contributions to India.

In August, Modi’s administration rescinded the partial autonomy of Jammu and Kashmir, India’s only Muslim-majority state, and split it into two.

A citizens’ register in Assam finalised this year left 1.9 million people, many of them Muslims, facing possible statelessness, detention camps and even deportation.

Modi’s government has said it intends to replicate the register nationwide with the aim of removing all “infiltrators” by 2024.