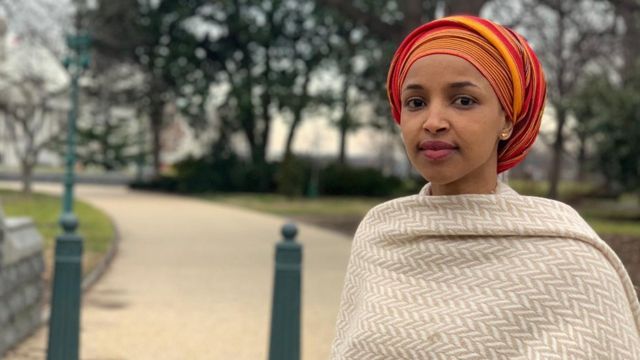 Omar’s latest non-apology was just enough to satisfy her Jewish Democratic critics, and with that, the controversy has subsided – until next time.

It takes considerable skill to come up with the words to sound just apologetic enough to get your critics off your back, but without actually apologizing. It took Omar several tries, but the US congresswoman from Minnesota seems to have finally figured out the formula.

First, she tried the tactic of pleading ignorance. This goes back to 2012 when Omar was serving as campaign manager for a Minnesota state senator. During that year’s Hamas missile jihad against Israel, Omar was furious that the international community, which was criticizing and pressuring Israel for defending itself, was not criticizing and pressuring it strongly enough. So, she tweeted: “Israel has hypnotized the world, may Allah awaken the people and help them see the evil doings of Israel.”

Nobody complained about it at the time because Omar was, literally, a political nobody. But in January 2019, soon after she was elected to the US House of Representatives, the tweet resurfaced, and she issued what was to become the first in a series of non-apologies.

According to Omar, she didn’t know that the words she used in 2012 would bother anybody. It was only afterwards, she said, “that I heard from Jewish orgs” that there was anything offensive about her language.

It was a classic shifting of responsibility. What she was saying, in effect, was that she couldn’t possibly have known, on her own, that anybody would be offended by her saying that Israel is “evil” and controls the world. Those tardy Jewish organizations told her only after she said it, not before!

She added defiantly, “I will not shy away of [sic] criticism of any government when I see injustice.” Of course, saying the Jewish state controls the world is not “criticism of a government,” but that’s how Omar deflects.

Omar’s second non-apology came in February 2019 after she tweeted that the support of many US Congress members for Israel is “all about the Benjamins baby.” In other words, her colleagues support Israel only because they are paid off. And in a follow-up tweet, she named AIPAC as the one doing the bribing.

The uproar was so intense across the political spectrum that this time Omar had to actually use the word “apologize.” This is the defense strategy in which you use the A-word, but you don’t mean it because, in the same breath, you assure your supporters that you will continue saying the same things that got everybody mad in the first place.

“I unequivocally apologize,” she said in a statement, but then vowed to continue attacking what she called “the problematic role of lobbyists in our politics.” In other words, she will continue accusing Jewish lobbyists of bribing members of Congress.

Last week, Omar found herself in search of a new formula for not apologizing. The controversy began when she asserted during a congressional hearing that the United States and Israel have committed “crimes against humanity,” just as Hamas and the Taliban have.

Twelve Jewish Democrats in Congress publicly condemned her despicable analogy, and some other prominent Democrats reportedly complained to Omar behind the scenes. This time, she didn’t even bother using the word “apologize.”

Naturally, she led with the racism accusation. That’s usually a sure-fire argument-stopper. In a tweet, Omar accused her critics of using “Islamophobic tropes.” Because that allegation was so obviously contrived, it did nothing to stifle her critics. So, the representative then issued a second statement: “I was in no way equating terrorist organizations with democratic countries with well-established judicial systems.”

Of course, she was equating them. That was obvious to anybody who can read and understand English. It was just a rhetorical strategy for Omar to blame everybody else instead of taking responsibility for her own words.

It was actually quite a calculated little formulation of words. Look closely at her sentence. Notice how she left herself just enough wiggle room to in effect assure her followers: “Don’t worry; I’m not really retracting the analogy. I don’t believe that Israel is either democratic or has a well-established judicial system. So, all I’m saying that terrorists – Hamas, the Taliban and Israel – are different from the US, which does have a judicial system, even though it’s flawed.”

It was both clever and effective. Omar’s latest non-apology was just enough to satisfy her Jewish Democratic critics, and with that, the controversy has subsided – until next time.

But that leaves the rest of us to ponder several important questions. How is it that only 12 of the 25 Jewish members of Congress were willing to publicly challenge Omar’s equation of America and Israel with terrorist groups? And how is it that only 12 of the 223 Democrats in Congress spoke out? Do they agree that America and Israel are terrorist regimes? Or are they just completely intimidated by the fear of being accused of racism or Islamophobia? And what does that say about the future of the Democratic Party and its positions on Israel and antisemitism?

Is addiction to social media a new epidemic?