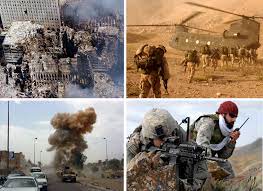 President Biden’s retreat from Afghanistan has generated deep concern about US anti-terrorism policy. Two time zones to the west of the mountainous country, the president’s actions raise questions about other possible withdrawals from small quasi-wars against terrorist militias in Africa. The news media give scant publicity to the terrorist activities, including attacks, recruitment, and territorial domination, in all parts of the continent.

Over the past few decades, the Pentagon has assumed a growing role in combating Islamist militias that pillage, murder, rape, and intimidate across wide swaths of Africa. Pentagon leaders also fear that African terrorist groups will follow in Al-Qaeda’s footsteps and launch attacks on the American homeland. Some politicians and pundits have grown increasingly eager to cancel all “forever wars,” but they ignore the dangers of doing so.

Radical Islamism found ready adherents in Africa, which has religious and cultural affinities with the Middle East, a center of violent extremism dating from the 1970s. Somalia was an early arena of this contemporary bloody sectarian upsurge. Somalia, in fact, was on Washington’s radar well before Al-Qaeda hijacked jetliners and flew them into the Twin Towers and the Pentagon in 2001. President George H. W. Bush sent more than twenty thousand soldiers to Somalia to restore peace and save the population from starvation as the Horn of Africa country descended into chaos and clan warfare. The Clinton White House then tried to build a modern nation from a failed state. After the star-crossed raid of special-operations forces into Mogadishu in 1993, President Bill Clinton withdrew all US military forces. Filling the political vacuum, Islamist militias established order, erected courts, and imposed sharia, or strict Islamic law, on the population.

Fearful that the Salafi-jihadis would use their territorial gains to establish launching bases for overseas terrorism, Washington had first sent CIA field operatives and then special-operations forces to ally with anti-Islamist clan lords in the mid-1990s. The spiraling disorder and bloodshed motivated the White House to step up covert military actions by the end of the decade.

After the 9/11 terrorist attacks, President George W. Bush initiated the “global war on terror” to stamp out Salafi-jihadi cells wherever they might sprout. Rather than mount large-scale, expensive ground invasions, like those into Afghanistan and two years later into Iraq, the Pentagon turned to low-profile special forces (Green Beret) teams to train, equip, and mentor indigenous forces beyond Somalia. These teams deployed into the Philippines, for example, to coach soldiers on how to take on Islamist-inspired bands, which were kidnapping American tourists and missionaries for ransom in the archipelago’s southern islands. These efforts kept the lid on most, but not all, of the violent extremism in the island chain. Moreover, they provided a model for the Pentagon’s African interventions.

Also as part of this counterterrorism strategy, the Bush White House authorized the CIA to conduct targeted killings of Al-Qaeda figures. Among the first struck by a Hellfire missile fired from a Predator drone was Abu Ali al-Harithi, a prime suspect in the bombing of the USS Cole in Yemen’s Aden harbor in 2000. Soon afterward, the Pentagon deployed special-operations forces in Yemen to battle jihadi fighters. It also set up a four-thousand-member US counterterrorism base in Djibouti. In 2007, the Pentagon established the US Africa Command (AFRICOM), one of its six geographical combatant commands, to counter the advancing threat on the continent.

Violence in the Maghreb

Far to the northwest of Somalia, the revolt in Libya fueled the smoldering fire in the region to the south of the Sahara Desert. In the Maghreb region, known for its medieval Islamic kingdoms, political conditions were ripe for Islamist penetration and domination. Ethnic animosities, cattle-versus-farming squabbles, and corrupt, arbitrary, or uncaring governments created fertile ground for extremist sects.

When rebels ousted Libyan strongman Muammar Gadhafi from power in 2012 as a consequence of the Arab Spring, the repercussions were felt in the Maghreb, particularly Mali. Arms poured in from Libyan armories. Disbanded Tuareg fighters from Gadhafi’s military returned home to northern Mali. The former soldiers garnered popular support because the Tuareg community had felt marginalized since Mali’s independence in 1960.

The outbreak of turbulence in Mali—as in, Syria, Iraq, and Yemen—created opportunities for Salafi-jihadis to protect endangered communities and portray themselves as defenders of insecure populations.

It should come as no surprise that militants intentionally provoked violence to pose as protectors of villagers. Salafist movements like Al-Qaeda in the Islamic Maghreb and Ansar Dine (Defenders of the Faith) soon prevailed over the tribalist Tuareg and instituted strict religious codes. The militants consolidated their hold by using mediation and arbitration in ways similar to those used by the Prophet Muhammad more than fourteen centuries before.

As the Mali crisis unfolded, the Pentagon reinforced its strategy for combating the rising terrorist dangers elsewhere in the transregional Sahel and Maghreb. As in other countries, the Pentagon strove to establish surrogate forces using indigenous recruits to tackle the Salafi-jihadis. The United States no longer looked to its own armed forces to pull the triggers in waging counterterrorism; instead, it worked to minimize US boots on the ground by carrying out its counter-extremist missions “by, with, and through” local partners.

This light-footprint model was replicated across the desert and scrub terrain as threats surfaced. In Chad, for example, the Pentagon temporarily dispatched eighty US soldiers to work with Chadian soldiers. It also assigned surveillance drones in May 2014 to locate over two hundred Chibok schoolgirls who had been snatched in northern Nigeria by Boko Haram, which a year later swore a bayat (oath of loyalty) to the Levant-based Islamic State emir, Abu Bakr al-Baghdadi. The abduction of the students was followed by several other kidnappings for ransom that threw into sharp relief the integration of terrorism and criminality that often characterized Salafi-jihadi behavior.

At the request of Mali’s government, France dispatched military forces in 2013 that ultimately topped five thousand troops in Sahelian Africa—the most of any US partner by far—with a mission to confront the creeping jihadist peril. Paris needed intelligence, transport, and logistical support. President Barack Obama authorized the Air Force to airlift many of the French forces to Mali and Niger, both former French colonies.

Mali and its neighbors secured no lasting peace, however, even with the aid of US and European Union forces, the G5 Sahel states (Burkina Faso, Chad, Mauritania, Niger, and Mali), and MINUSMA (United Nations Multidimensional Integrated Stabilization Mission in Mali), a sixteen-thousand-strong entity of troops, police, and civilian experts assigned to protect population centers. Midway through 2020, European governments in the Czech Republic, Estonia, Italy, Sweden, and other countries put commandos in the field to bolster the performance of regional troops. This task force, named Takuba (meaning “saber” in the local tongue), was the signature initiative of Emmanuel Macron, the French president, who had pushed for a stronger European military capability in Africa.

All the while, jihadi groups kept exploiting local disputes—among the Fulani ethnic community, for example—to boost their ranks and influence. Operating among the Fulani, whose roughly thirty-eight million people span West and Central Africa, they sowed chaos and death, with the radicalized Fulani preying on the Dogon and Bambara ethnic communities. Long-standing grievances over stolen livestock, land, and water sharpened disagreements among the groups. All this murderous strife earned Mali the dubious distinction of being the most dangerous United Nations peacekeeping assignment.

Armed Actions Are Crucial, But Not Enough

From the last years of the George W. Bush presidency to the present, Washington went from almost no military presence in Africa to operating a web of almost thirty small bases for training and surveillance purposes to battle the expanding jihadi incursions. Drones and manned aircraft flew from airfields in Niger, Cameroon, and Chad, along with flights from Somalia, Djibouti, Ethiopia, and Uganda. Niger grew to be an AFRICOM hub for the roughly twelve hundred US troops deployed in West Africa, some in secret outposts. In the Agadez region, the US Air Force constructed a base that cost more than $100 million and took four years to complete. Starting in the Trump presidency, the seventeen-acre facility hosted military personnel and launched drone flights.

Much of this military activity remained, and remains, unknown to the wider public. There were occasional news reports on counterterrorism operations, but in general, armed actions were staged behind a shroud of secrecy. Journalists had to accept specific guidelines, such as not identifying special-operations warriors by name or mentioning the super-secretive SEAL Team 6 or Delta Force in their stories.

The curtain was pulled back briefly when an ill-fated patrol in Niger lost four Green Berets in an ambush in October 2017. Twice the size of Texas, the Republic of Niger has loomed large in Pentagon worries because of its political and ethnic precariousness. It has been the scene of sustained special-forces instruction and mentorship of Niger’s soldiers, thirty of whom were part of the patrol that was attacked. Roughly a hundred fighters from the Islamic State of Greater Sahara (ISGS), affiliated with Syria-based Islamic State, surprised the small American-led patrol near Tongo Tongo, a little more than a hundred miles north of Niamey, the capital. The ISGS militants inflicted severe casualties on the joint detachment partly because it lacked air cover. Undeterred by bounties on its leaders, the ISGS went on to wreak carnage among poorly defended populations in Niger, Mali, and Burkina Faso, pointing to an extended conflict and the need for US and allied forces.

After billions of dollars were misspent in Iraq and Afghanistan, Washington shied away from the astronomically priced infrastructure-building so prevalent in the post-invasion “nation building” phases. Many of these elaborate construction projects, of course, were never completed, or fell into disrepair or malfunction with no skilled local staff to tend them. Subsequent administrations downplayed nation-building and largely curtailed the construction of hydroelectric dams, modern highways, high-tech facilities, or hospitals, the kind of infrastructure that was put up by giant American conglomerates under US contract. Good-governance practices remain a priority today with US military forces and civilian experts.

America’s interventionist response to terrorist networks did notch a victory in forestalling another 9/11 attack on the homeland. Critics have called attention to the costs of this strategy, as it keeps the United States tied down in numerous small proto-wars at a time when the United States faces great-power rivalries with China and Russia. But given that the US Special Operations Command spends about $13 billion a year—a figure largely unchanged over the past four years—it appears to be a defense bargain. By contrast, the total of all defense-related expenditures, including the base budget, the Veterans Administration, Homeland Security, and others, comes to $933.8 billion for the current fiscal year.

Critics have no realistic counterplan to offset the risks of Washington washing its hands of the partner strategy in Africa. The nature of the low-intensity insurgences makes for no quick exits. Even if victory is elusive, the military forces committed to Africa present the only realistic plan to degrade and contain violent extremist organizations.