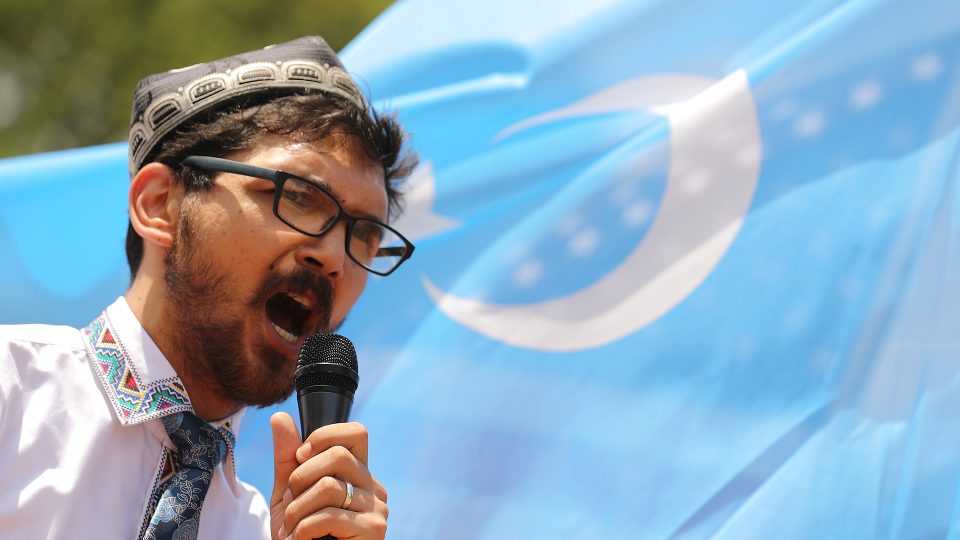 Salih Hudayar, founder of the East Turkistan National Awakening Movement, leads a rally outside the White House to urge the United States to take action to stop the oppression of the Uighur and other Turkic peoples in China on August 14, 2020, in Washington, D.C. The ETNAM and East Turkistan Government in Exile groups submitted evidence to the international criminal court, calling for an investigation into senior Chinese officials for genocide and crimes against humanity.

The classified Chinese government documents at the core of the China Cables investigation were included as evidence submitted to the International Criminal Court in a complaint alleging genocide against the Uighurs by China’s top leaders, the lawyer leading the case said.

Lawyers representing two Uighur activist groups filed the complaint with the ICC in July and are now waiting to meet with chief prosecutor Fatou Bensouda to discuss the evidence, which includes “countless” eye-witness accounts and reports by researchers and journalists of alleged forced sterilization, torture and forced labor.

“This is a classic crime against humanity of the highest order,” Rodney Dixon, an international human rights lawyer and the lead counsel, told ICIJ.

The China Cables “will be very important documents that come from the alleged perpetrators directly,” he said, adding that they will have to be verified independently in future trial proceedings.

“For now, those documents are all taken into account to establish that there’s a reasonable basis to believe crimes were committed and to be able to get the investigation open,” Dixon said.

“We want real justice where the Chinese government and its officials are held accountable and punished just like the Nazis at the Nuremberg trials and the various criminals at the Yugoslavian tribunal,” ETGE’s leader Salih Hudayar said. “Ultimately, we want this to be a one of the first steps towards regaining our nation’s independence and freedom.”

China doesn’t recognize the ICC mandate, but the complainants have circumvented that by claiming that the crimes were committed in Tajikistan and Cambodia, which are signatories of the court.

Both countries are responsible for “unlawfully” deporting Uighur refugees back to China where “they have been subjected to human rights abuses and serious crimes,” ETGE said in a statement.

It’s the same strategy that was used to investigate crimes against the Rohingya minority allegedly perpetrated by Myanmar ー which is not a ICC member state ー by examining potential abuses in its neighboring country, Bangladesh.

Chinese officials have repeatedly dismissed the claims as slanderous and recently said the government has lifted more than 1 billion people out of poverty by “pursuing a people-centered vision on human rights.”

In a press conference earlier this month, foreign ministry spokesman Wang Wenbin said, “The Chinese people’s rights to speech and religious freedom, as well as the ethnic minorities’ right to participate in the governance of state affairs, are protected according to law.”

Earlier this month, a group of more than 60 parliamentarians from 14 countries joined the appeal and sent a letter to the prosecutor to “call on the ICC to play its part in ensuring that the perpetrators of the most egregious human rights abuses are held accountable and prevented from acting with impunity.”

Dixon called the lawmakers’ move a “very important first step” to show the prosecutor that “if she takes on a case like this, which is difficult, massive, and politically very sensitive, [she] will be supported around the world,” he told ICIJ from London.

It is not clear when the prosecutor will respond to their request, and whether she will choose to pursue it. If she does, she will examine whether there’s a reasonable basis to believe the crimes are being committed, Dixon explained.

For Hudayar, the politicians’ support was “a big slap in the face to China,” and he hopes governments across the globe will continue to recognize China’s violations against the Uighurs and other Turkic peoples.

“The world must uphold its promise of ‘never again’ and take real action, including humanitarian intervention if necessary,” he said.