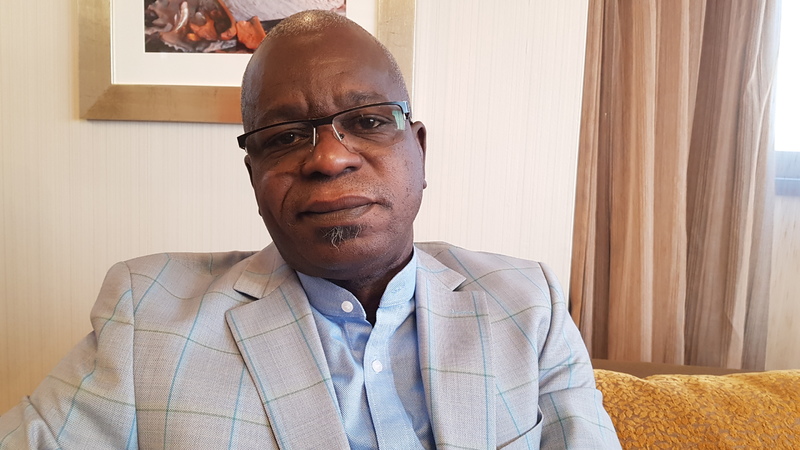 At Ellis Park Stadium, as he observed President Cyril Ramaphosa’s inauguration — as he watched the fighter jets scream overhead, and the neatly-drilled ranks of South African National Defence Force soldiers on parade — Burkina Faso’s defence minister couldn’t help but think that there may be a better use for South Africa’s military might.

“It hurts me to think that a country like South Africa could help us,” says Moumina Cheriff Sy, in an interview in his Johannesburg hotel room. “Not only could, but should…This African solidarity that my country has a right to expect is not forthcoming.” But his country does not receive much in the way of practical support for South Africa — despite Burkina Faso’s strong support for the anti-apartheid struggle. “All we see these days are South African multinationals involved in resources,” he says.

As militancy in the Sahel has expanded in recent years, so Burkina Faso has found itself on the frontlines of a war that it doesn’t quite understand, and is woefully ill-equipped to fight.
This year, near-daily attacks by armed groups on churches, schools and government buildings have left dozens of people dead, and are stirring up dangerous inter-communal and inter-religious tensions. Fears that Burkina Faso could turn into the next Mali, or north-east Nigeria, appear increasingly well-founded.

It falls to Sy to prevent this from happening. He was appointed to the cabinet of President Roch Marc Christian Kaboré in January 2019, after Kaboré took the extraordinary step of sacking his entire government and starting again from scratch. After all, desperate times call for desperate measures.

Sy is not your typical defence minister. Although his father was a former army boss, and a member of Thomas Sankara’s inner circle, Sy himself is a journalist, making his name as the editor of the independent newspaper Bendre. But he has also taken an active role in politics, playing a key part in the 2014 ousting of would-be president-for-life Blaise Compaore, and serving as the speaker of the transitional authority which followed. In 2015, when a renegade general attempted a counter-coup and detained the interim president and his deputy, Sy was acting president for six days — during which time he successfully defused tensions and got Burkina Faso’s political transition back on track.

Being in government is an altogether different challenge from managing newsrooms. “As a journalist, you were fighting for change. Now you’re in a position to make change. It’s not always easy, because your agenda is not always the same as the politicians,” he says. But his agenda has also changed since assuming his post: “I have access to information which makes me see things differently.”

It is, he insists, better information that anything available to the rights groups that frequently criticise the conduct of the soldier who fall under his ministry. In the week that we meet, Human Rights Watch released a report that found that Burkinabe soldiers were responsible for executing at least 115 alleged militants — although there was no court process to support these allegations. It found that armed Islamist groups have also been involved in extrajudicial killings.

This is not be the first time that Burkina Faso’s armed forces have been implicated in atrocities, and Sy admits that his army is not perfect. “Human Rights Watch and others did make these accusations. Even if they were exaggerated, we still did the investigation, we arrested soldiers. They were acting in a way that was not in accordance with army principles, and were punished.”

Nonetheless, he offers a withering criticism of the way that rights groups go about their work, and their findings: “These organisations stay in their air-conditioned offices and do their investigations by telephone. They are not on the ground and there is a problem with the credibility of these accusations. They almost always accused the military, but precisely because they are not on the ground, they never speak of the attacks on villagers.” This last point is not true: on their websites, both Amnesty International and Human Rights Watch prominently highlight the atrocities committed by armed Islamists.

When he took over as defence minister, Sy quickly identified his three most urgent priorities. One is to modernise and professionalise the army. Another is to “reassure the population that there is a government and that there is an army that is there to protect them” — a frank admission that previous administrations have failed to build that trust with citizens. Finally, and probably most importantly, he wants to “fight the terrorists who kill, who loot, who attack people and try to occupy parts of our country”.

This final aim is greatly complicated by the fact that Sy — and he’s not alone in this – struggles to identify exactly what is motivating the surge of violence in his country. “It’s a question I ask myself three times a day,” he says. He knows, however, exactly where the problem comes from.

“Ever since the West assassinated Gaddafi, and I’m conscious of using that particular word, Libya has been completely destabilised. While at the same time it was the country with the most guns. It has become an arms cache for the region. All the terrorists can easily get arms.

“I think there’s a big business behind all these things, that has little to do with religious motivations. These people have a lot of money to recruit youth, to pay them, to pay their families. The Sahel is a big trafficking zone. The traffickers sell cheap cigarettes. They arrive in Benin, or Togo. They go through Burkina Faso or maybe Niger. Then it goes through the desert zone of Mali. Actually the Algerian generals are complicit in this trafficking. Then it goes to Europe…this same network is being used by the drug dealers of Latin America.”

A regional threat requires a regional response, and the Sahelian countries are supposed to have exactly that, in the form of the G5 Sahel: a fighting force comprised of Burkina Faso, Chad, Mali, Mauritania, and Niger, the countries that have been hardest hit by armed militancy in the region. European countries, especially France, were key players in the establishment of the G5 in 2017, and at the time promised substantial economic and military support.

It hasn’t worked out that way, says Sy, who says the G5 has has “zero” impact. “The G5 Sahel is not effective at all. It’s really difficult to mount a joint military force. And all the promises made by Europe until now have not been kept. The promised guns, the tanks — until now, zero. My personal feeling is that the G5 cannot succeed because we cannot trust Europeans with our personal safety. It’s first and foremost our issue and we are doing what we can but it’s complicated.”

Sy cannot help but question Europe’s motives — and those of France, Burkina Faso’s former coloniser, in particular. “I personally think if France did not intervene in Mali in 2013 [when a rapid response from French military prevented Islamist groups from storming Bamako], there wouldn’t be a Malian state, so that was a good thing. But since then the situation hasn’t really improved.

“They’ve got maybe 4 000 men in the region, they have all the military and technological resources, so I’m surprised they haven’t been able to eradicate this band of terrorists. We ask ourselves a lot questions: if they really wanted to, they could have beaten them, so do they have another agenda?”