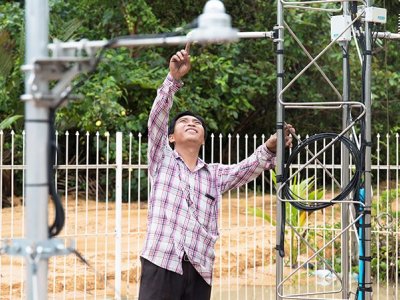 In February last year, Somalia was in the midst of a declared national emergency. Swarms of locusts, fed on rains driven by climate change, were steadily eating their way through swathes of crops and grasslands, consuming jobs and food supplies in the process. As a result, the already-fragile country was facing yet another devastating famine.

In the subsequent months, further disaster was to strike as floods and cyclones unfolded across the country, displacing more than 650,000 from their homes.

2020 was an extraordinary year for most, but Somalia has been used to challenges, facing as it does a complex backdrop of conflict, political instability, and climate-related disasters.

Over the years, recurring droughts and floods have been a major driver of humanitarian crises.

At the same time, extreme groups such as Al-Shabab have been undermining peace and security, and driving conflict over natural resources, in turn affecting business and trade.

Ongoing civil war since 1991 has de-stabilized institutions and undermined governance.

Now climate change may prove to be the biggest threat ever posed to the country, delivering even more extreme and unpredictable weather with dire consequences for already-vulnerable communities.

Fortunately, Somali political leadership has understood the threats and has shown commitment to addressing them head-on.

In 2013, a National Adaptation Programme of Action (NAPA), developed with the support of the UN Development Programme (UNDP), was Somalia’s first step towards a nationwide climate adaptation strategy.

Since the establishment of the NAPA, progress has been made in boosting resilience and empowering everyday Somalis to prepare for and withstand extreme weather. Most Somalis, for instance, now understand how to better manage water to be able to withstand drought periods.

Examples of innovation have emerged as well, including in early warning systems and using mobile apps to reach communities, and work to collect and connect data on climate change with disaster risk reduction.

Ecosystem-based adaptation solutions are being embraced. In one example, under a UNDP-supported water management project, community-led afforestation initiatives are helping combat desertification.

While Somalia’s emissions are historically extremely low, this represents a significant target given the country’s extremely challenging circumstances and constrained resources

Somalia’s commitment to tackle climate change has been registered internationally and in 2015 the country registered its Intended Nationally Determined Contribution (NDC) – a formal statement of plans to reduce emissions and adapt to the effects of climate change under the global Paris Agreement.

Now it is working on a revised, more ambitious NDC to be submitted in the coming months.

Unlike the first, the new NDC – which examines the agriculture, water, energy, waste, and forest sectors – will have binding targets, including an overall goal to reduce greenhouse gas emissions by 30 percent by 2030 relative to a business-as-usual trajectory, with international financial and technical support.

The government is also committed to an unconditional goal of reducing its net greenhouse gas emissions by 5 to 10 percent by 2030 using its own resources.

While Somalia’s emissions are historically extremely low, this represents a significant target given the country’s extremely challenging circumstances and constrained resources.

For the fragile state, climate mitigation efforts are win-win, helping support economic growth while boosting health, energy access, and environmental outcomes into the future. They also reflect a commitment to join the world on a low-carbon sustainable development pathway. And signal to the world the urgent need for bold climate action.

Developed in consultation with a wide range of stakeholders, the NDC envisages clear roles not just for government but also for communities at large, including women, youth, civil society, and the private sector.

Citizens, for example, play a leading part in restoring forests and degraded ecosystems, disaster risk management, and sustainable land management, while the private sector has an important role in the uptake of renewable energy technologies, the mobilization of climate finance and investment, and climate change awareness.

With the backing of the Green Climate Fund and UNDP, the government is now developing a series of implementation roadmaps, including for adaptation and disaster risk reduction, to ensure the goals of the NDC are met.

Somalia is also using its COVID-19 recovery plan as a tailwind for green growth and meeting their NDC targets. For example, they are supporting people who lost their jobs to restart employment in fields that decarbonize the economy.

Around the world, action on climate change through NDCs is intimately connected to health and wellbeing, to peace and security – nowhere more so than fragile states like Somalia.

Despite the most difficult of circumstances, Somalia’s proactive, multi-sectoral, and cohesive approach to climate action shows strong leadership.

With partners and international support, the fragile state will realize its goals for resilience and realize a low-carbon sustainable future.

There is no time to waste.