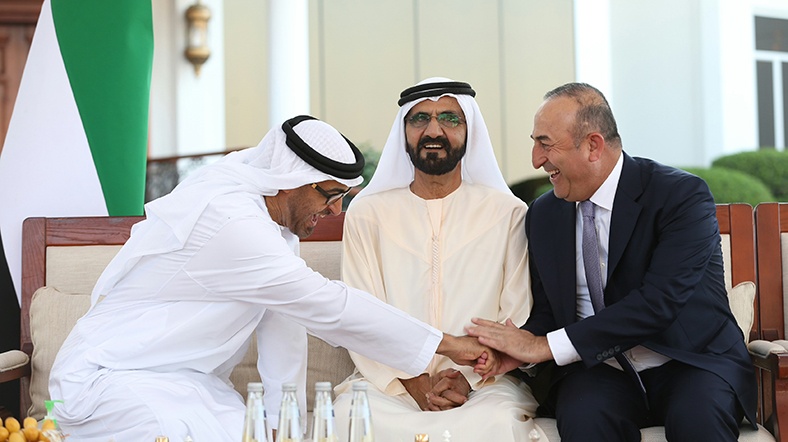 On March 13, Turkey’s Foreign Minister Mevlut Cavusoglu said that there was “no reason” not to mend ties with the United Arab Emirates if the UAE took a “positive step.” Cavusoglu’s statement was a marked break from his assertion in December that the UAE’s policies towards Turkey were “absolutely not friendly” and efforts to mediate with Abu Dhabi “haven’t done any good.” However, it echoed conciliatory comments from UAE Minister of State for Foreign Anwar Gargash prior to his departure last month. On January 10, Gargash said that the UAE did not have “any problems with Turkey, like border issues,” and therefore, had no reason to be in conflict with Turkey.

In spite of Cavusoglu’s shifting rhetoric, prospects for a de-escalation of the UAE-Turkey rivalry are slim. The UAE and Turkey are locked in a seemingly intractable ideational competition, which has shaped their responses to regional security crises and dragged other regional powers in competing blocs. This ideational competition is reinforced by an ongoing information war between the UAE and Turkey, which has been stoked by senior officials in both countries, state-aligned media outlets and social media. The expansion of the UAE-Turkey rivalry to global theatres, such as the Eastern Mediterranean, Africa, and Eurasia, further complicates the path to reconciliation between Ankara and Abu Dhabi.

The UAE and Turkey have been ideational rivals since the Arab Spring. While Turkey cheered on the elections of Muslim Brotherhood governments in Tunisia and Egypt in 2012, the UAE viewed the triumph of liberal democracy and Islamist civil society movements with alarm. This divide gradually morphed into a broad array of disagreements on Middle East affairs. The UAE supported Abdel Fattah el-Sisi’s 2013 coup in Egypt, normalized diplomatic relations with Syria in 2018, and backed Libya National Army chieftain Khalifa Haftar’s offensive on Tripoli in April 2019. It also spearheaded the June 2017 blockade of Qatar and cheered on U.S. President Donald Trump’s May 2018 withdrawal from the Joint Comprehensive Plan of Action.

Turkey severed diplomatic relations with Egypt in 2013, continues to decry Assad’s legitimacy and backed Government of National Accord’s successful counter-offensive against Haftar in Libya. Turkey also opposes the U.S. maximum pressure policy against Iran and has consistently expressed solidarity with Qatar. The UAE’s normalization of relations with Israel in August 2020 further increased tensions between Ankara and Abu Dhabi even though Turkey has maintained diplomatic ties with Israel since March 1949. Erdogan described the Israel-UAE normalization as a “move against Palestine” and “not a step that can be stomached” and threatened to completely suspend diplomatic relations with the UAE.

The resolution of Turkey and the UAE’s foreign policy disagreements is complicated by the crystallization of competing ideational coalitions in the Middle East, which center around the Turkey-UAE rivalry. Saudi Arabia, Egypt, and Bahrain have aligned with the UAE’s counter-revolutionary and anti-Islamist positions, and to varying degrees, view Turkey’s regional conduct as threatening. All four countries participated in last month’s Philia Forum in Athens, which was widely viewed as an anti-Turkey conference. Turkey and Qatar have formed an ideational coalition, which supports Islamic civil society movements and periodically encouraged popular unrest in the Arab world. Turkey’s efforts to de-escalate tensions with Egypt and Saudi Arabia, and the January 5 AlUla Agreement, which ended the Qatar blockade, are unlikely to demolish these hardened ideational blocs.

Caustic official statements and an ongoing Turkey-UAE information war have caused these foreign policy disagreements to trigger popular-level animosity. Turkey has accused the UAE of supporting the 2016 coup attempt against Erdogan and in May 2020, Cavusoglu claimed that the UAE was trying to “sow chaos” in the Middle East. Anwar Gargash has stoked fears of Neo-Ottomanism in the UAE by warning of Turkey’s “expansionist strategy” in the Middle East and claimed that Turkey’s military presence in Qatar contributes to instability in the Gulf region.

Turkish and UAE state-aligned media outlets have consistently amplified these messages, even after Gargash tentatively endorsed a conditional de-escalation between the UAE and Turkey. A January 14 article in The Daily Sabahdeplored “the UAE’s cooperation with dictators and putschists,” and support for terrorist groups, such as the PKK in northern Iraq and FETO in Turkey.

A January 16 article in Yeni Safak accused the UAE of “underhandedly backing terrorism through all sorts of lies and violence.” The UAE-aligned Arab Weekly accused Erdogan of “trying to make up for his policies’ shortcomings through a deceptive narrative that does not require him to make any concessions,” and regularly presents Turkey as an imminent threat to the stability of the Persian Gulf. This information war has impacted public opinion in both countries. Although recent quantitative data on Turkey’s perceptions of the UAE is hard to come by, a June 2020 Washington Institute for Near East Policy poll showed that 70 percent of Emiratis did not see relations with Turkey as important.

Even if Turkey and the UAE can eventually agree to deconfliction within the Middle East, extra-regional competition between the two countries could sustain their rivalry. The Eastern Mediterranean is the most significant area of geostrategic contestation between Turkey and the UAE. The UAE regards the November 2019 Turkey-Libya Maritime Boundary Treaty, which unilaterally expands the scope of Turkey’s exclusive economic zone, as an illegal agreement. Due to this position, the UAE co-signed the May 2020 Joint Declaration on the Eastern Mediterranean, which Turkey derisively called a France-led “Axis of Malice.” In November 2020, the UAE signed a defence pact with Greece and the Emirati navy participated in the Greek-Egyptian-Cypriot Medusa-10 training exercises from November 30 to December 6, 2020, off the coast of Alexandria.

A similarly heated UAE-Turkey rivalry has emerged in Africa, as both countries vie for influence in the Maghreb, Red Sea, and the Sahel. In November 2020, the UAE reportedly threatened to impose sanctions on Algeria over its close relationship with Turkey. A competition for ports is underway in Somalia, as the Somali government reportedly signed a 14-year contract with a Turkish company to run Mogadishu port in October 2020 and Dubai-based port company DP World is modernizing Berbera in Somaliland. In Sudan, the April 2019 overthrow of Omar al-Bashir allowed the UAE to crowd out Turkey’s influence. However, in June 2020, Turkey signed a military agreement with Niger, which potentially allows it to outbid the UAE for a remote base for power projection in Libya.

A nascent competition between Turkey and the UAE is also emerging in Eurasia. Since Turkey-backed Azerbaijani military forces captured the battleground city of Shusha in Nagorno-Karabakh in November 2020, the UAE has deepened its partnership with Armenia. Tatarstan, a Muslim-majority Russian region, is another battleground for Turkey-UAE economic competition. In December 2019, Turkey announced a $1 billion trade target in Tatarstan. The UAE responded by signing a series of agricultural, industrial and construction agreements with Tatarstan in February 2021 and regularly invites Tatarstan’s President Rustam Minnikhanov to the IDEX arms fair in Abu Dhabi.

Although Turkey is trying to de-escalate its rivalries in the Arab world and the UAE seeks to appease the Biden administration by moderating its bellicose actions in the MENA region, a genuine rapprochement between Ankara and Abu Dhabi will likely prove to be elusive. The transformation of the Turkey-UAE rivalry from a regional to global competition will make it even harder for both sides to ease bilateral tensions in the months ahead.